I wrote recently about being at the Wat Phu temple complex near Champasak in Southern Laos, and how quiet this was compared to the more tourist filled Khmer temples near Angkor Wat in Cambodia. One of the nearby places that appears on the tourist people for more people is the Four Thousand Islands area of Laos, or Si Phan Don.  The area is, as the name suggests, a series of islands in the mighty Mekong river.  Don Det and Don Khon, two islands in this group are on the backpacker trail, and one end of the island is popular among young westerners travelling through South East Asia.

We stayed on the other island, and walked across the short bridge to explore where the backpackers arrived.  To our surprise, most of the backpackers seemed to arrive on a boat and stay in the couple of hostels nearest where the boat stops; to call it a port would seem to be over selling it.  Whilst we were there, a boat arrived, and unloaded its cargo of people onto the beach. 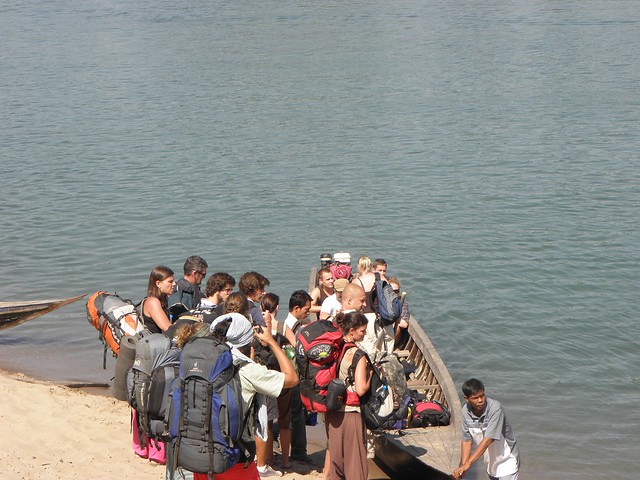 Some of the backpackers would go to the impressive Khone Phapheng Falls at the end of the island.  These powerful waterfalls – which are up to 21m in height – were the prime reason why the Mekong was found to be not navigable into China.  There were repeated and unsuccessful attempts to navigate the falls in the late nineteenth century, leading to the construction of a 7km narrow gauge railway line between Don Det and Don Khon, which lasted until the 1940s.  The engine that ran on this line, Eloise, is on display on the island, sitting on an overgrown part of the original track.

I could understand the building of the railway; the tales of steamships attempting to be pulled up these waterfalls were hard to imagine given the raging torrents of water pouring over the dangerous looking rocks.  These waters are also home to the plabuck, a catfish reputed to grow up to three metres in length. 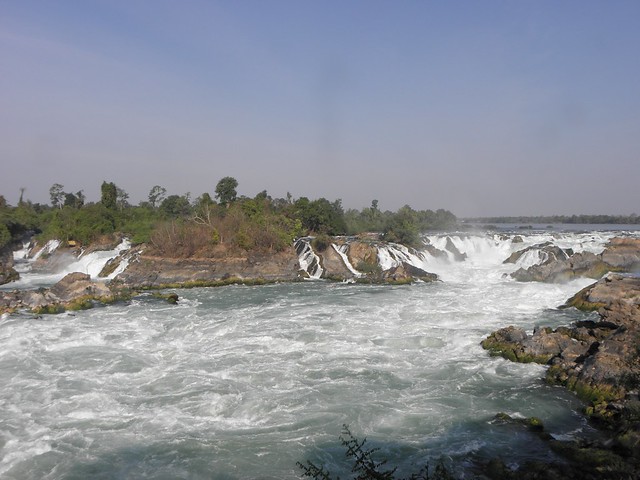 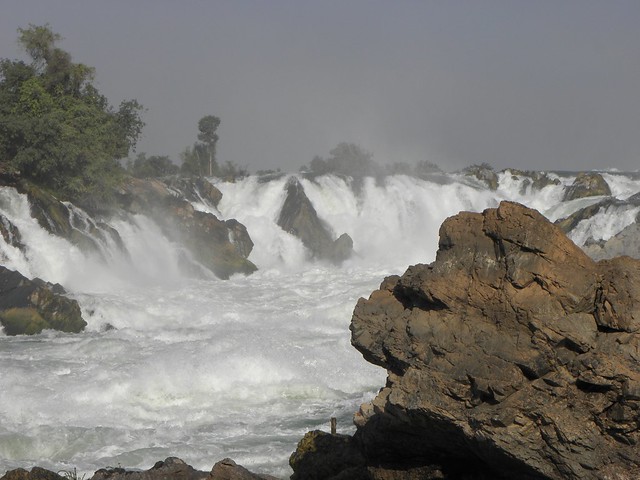 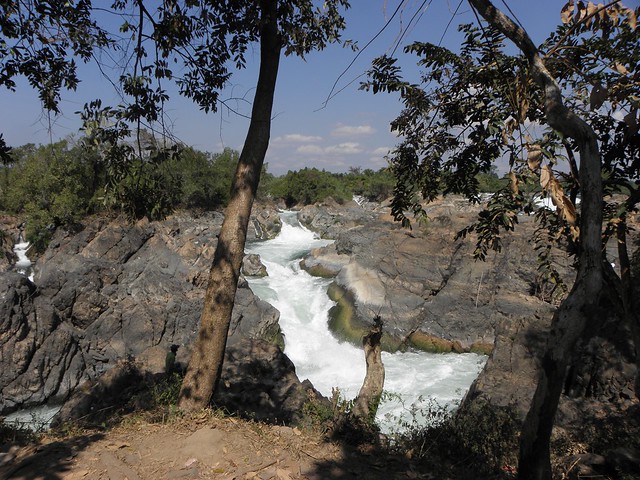 We went back to Don Det, the adjacent island, where there was no motorised transport, and we journeyed around the island by bicycle.  At the southern end of the island, we got in a boat, and travelled down the river in search of the Irrawaddy River Dolphin.  We passed over some small rapids – thankfully not anywhere near as big as those near the island – and passed by a fishermen’s hut on a small island in the river.  Just beyond that, we caught fleeting glimpses of the dolphins.  These were all too swift for me to capture on camera, but I did get some pictures a few days later a little further south in Cambodia. 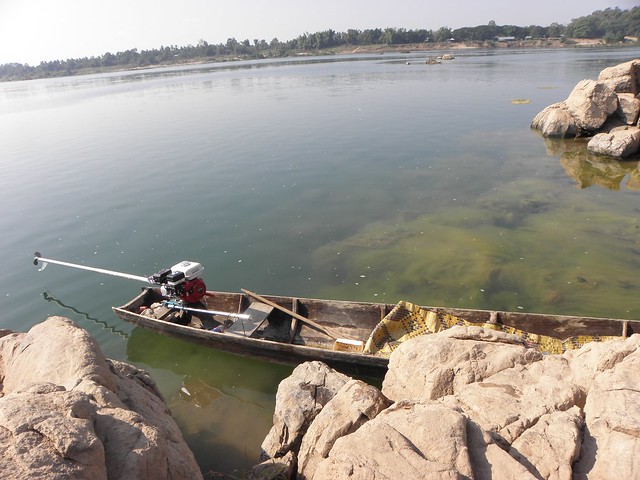 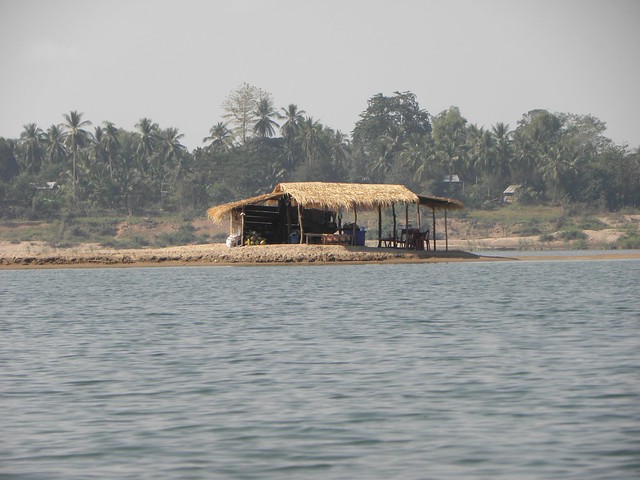 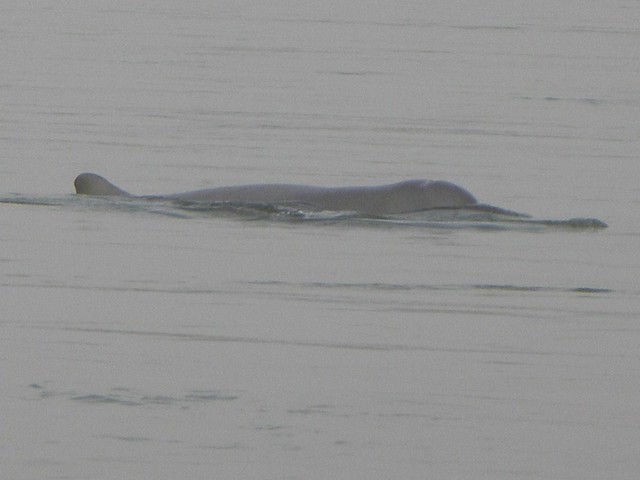 Back on the island, our accommodation was a bungalow floating on the river.  We had seen these whilst crossing to the island, and watched as they rose and fell gently with the motion of the river. 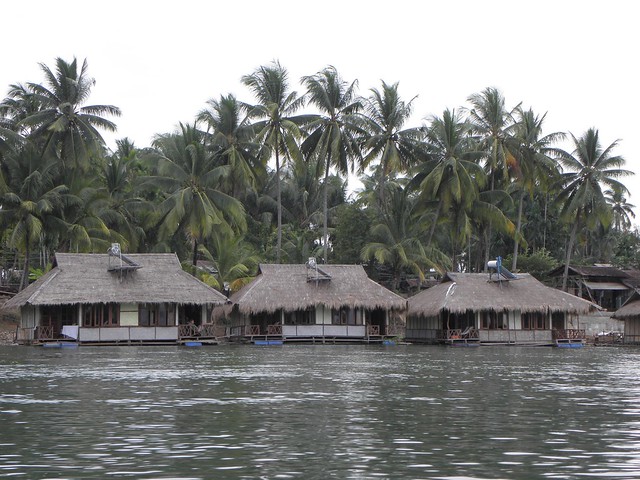 The veranda of the bungalow did give us quite an impressive view of the river and the islands. 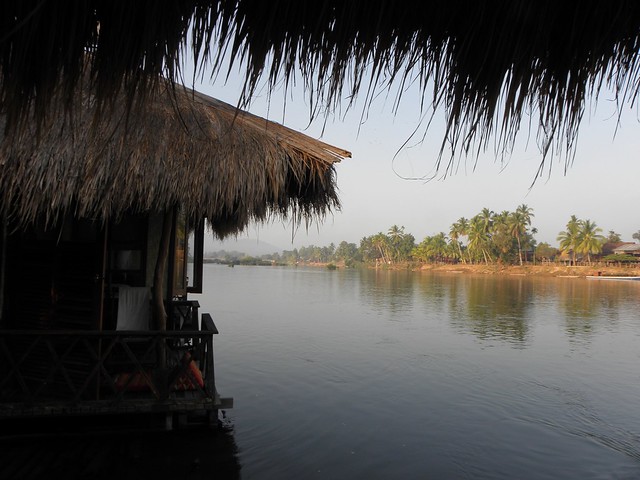 However, this view seemed much more impressive when the sky was tinged with the redness of sunset. 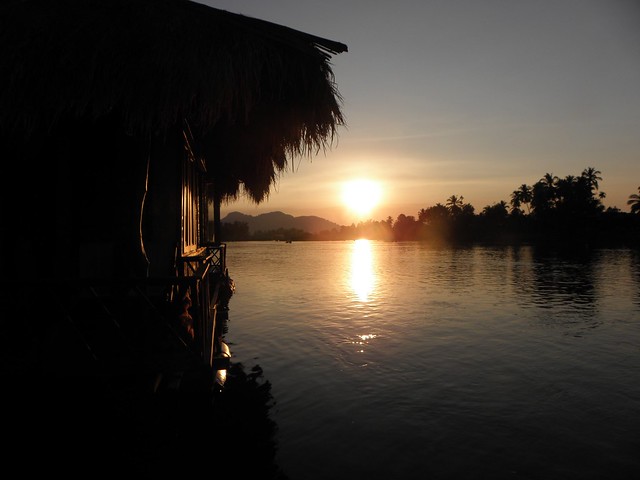 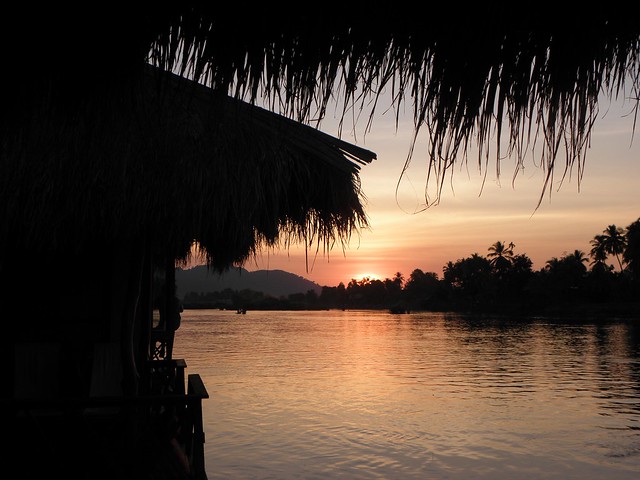 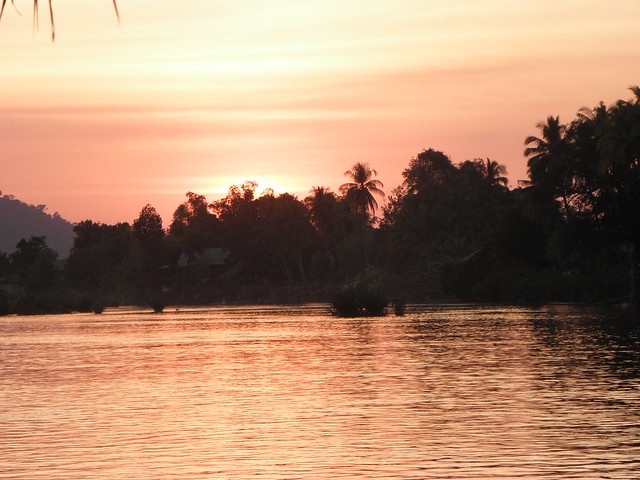 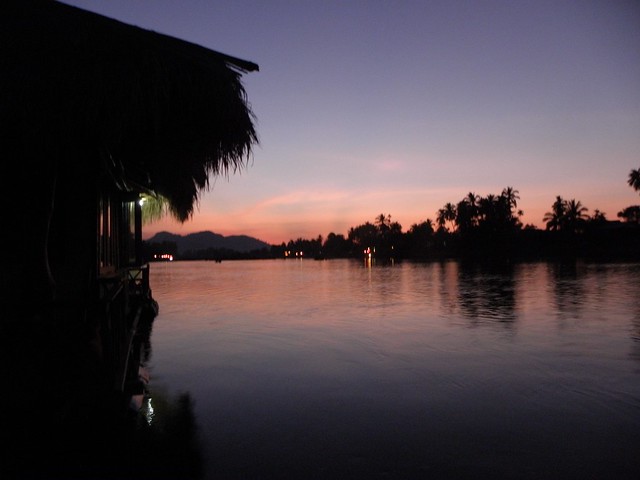 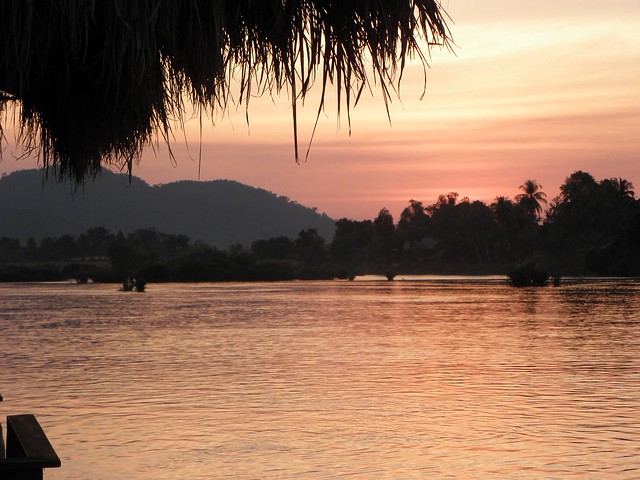 The island had only been connected to the electricity grid three months before we arrived, and much of the lighting still consisted of naked flame.  This, combined with the lack of motorised vehicles gave the islands a feeling of detachment from the outside world.  There were chickens roaming the islands, and at night, the intermittent sound of birds calling was enough to wake us up through the relatively thin walls of our bungalow.   However, the chickens aside, the sound of the wildlife and the lapping water combined with the view meant that this was a great place to relax for a day or two after a few weeks travelling in Cambodia and Laos before heading back to the border and through Cambodia to Phnom Penh.