Luang Prabang in the north of Laos is the former Royal capital of the country, and was once the capital of the country of Luang Prabang, one of the three countries that came together to form modern Laos.  It remained the royal capital until 1975, when the country became communist, under the Pathet Lao regime.  As well as being independent and part of Laos, the city has also spent time under the influence of both the Khmer and French, and the French influence is still apparent in this part of Indochina.

The city is on the Mekong, and a number of boats move up and down the river past Luang Prabang, with the water being a major transport provider in the area. 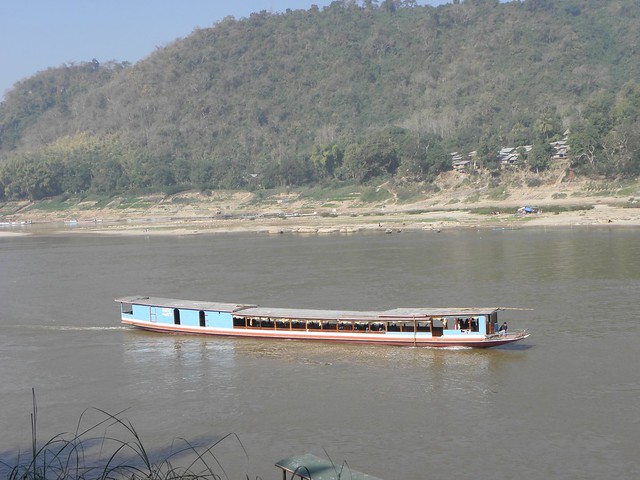 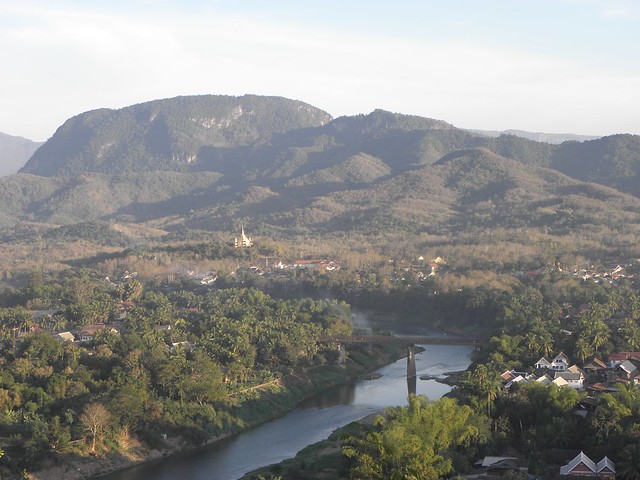 There are boat builders working by the river, making sure that there is a steady stream of vehicles to transport people and goods along the Mekong as required. 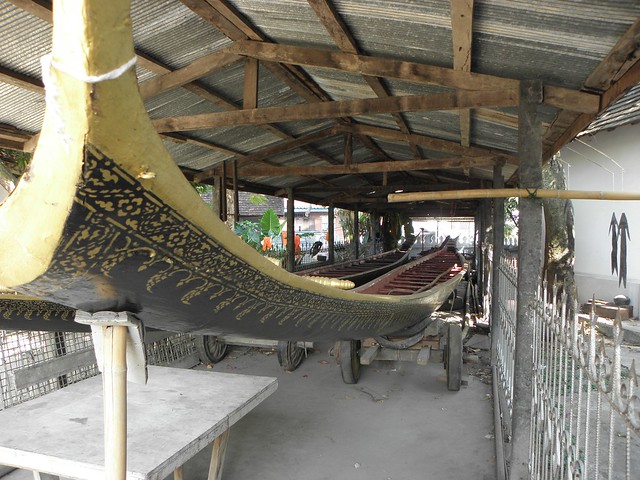 As well as the river, one of the other key points about the city, and one which is hard to miss, is the large number of temples in Luang Prabang, many of which are ornately decorated, and all of which seem to be in frequent use. This is particularly noteworthy given that the current population of the city is only around 50000. 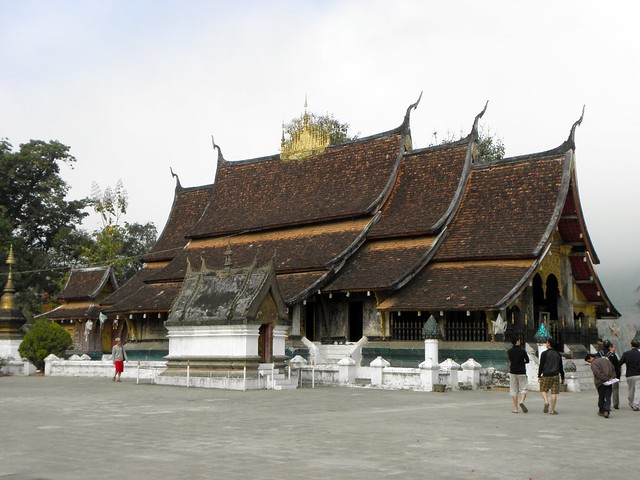 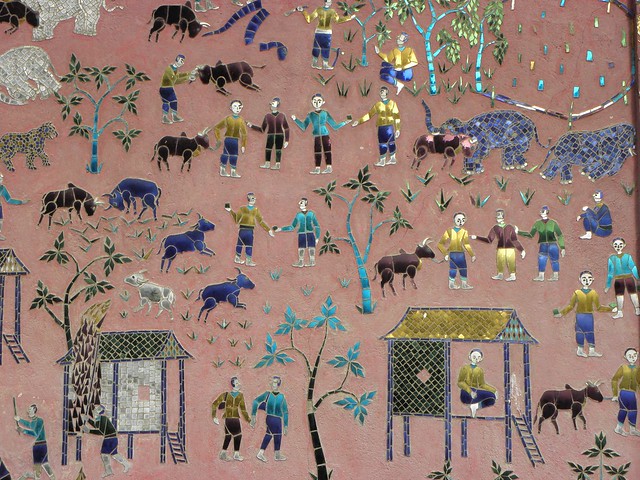 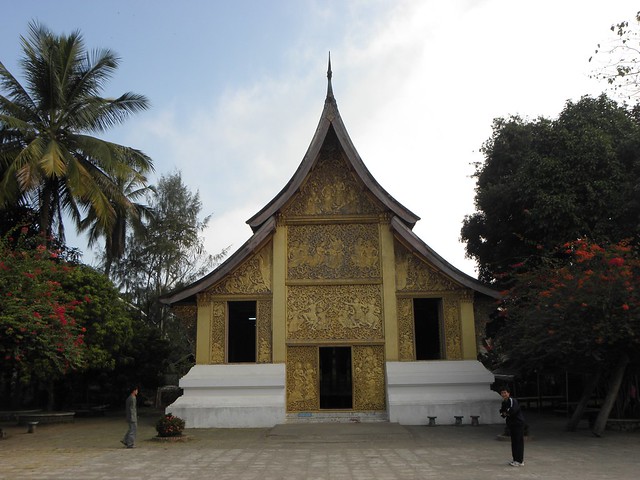 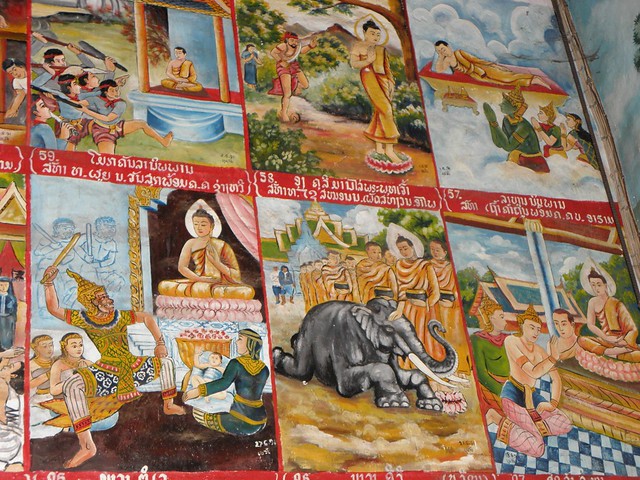 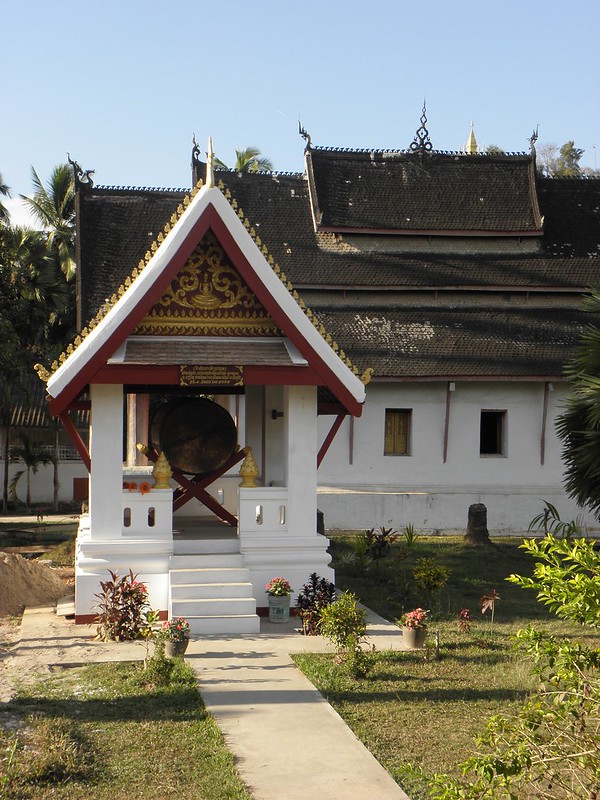 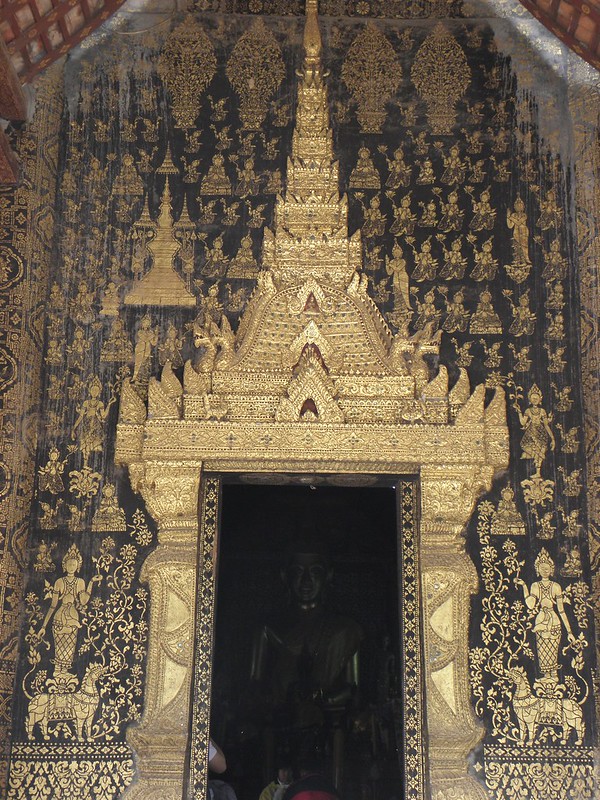 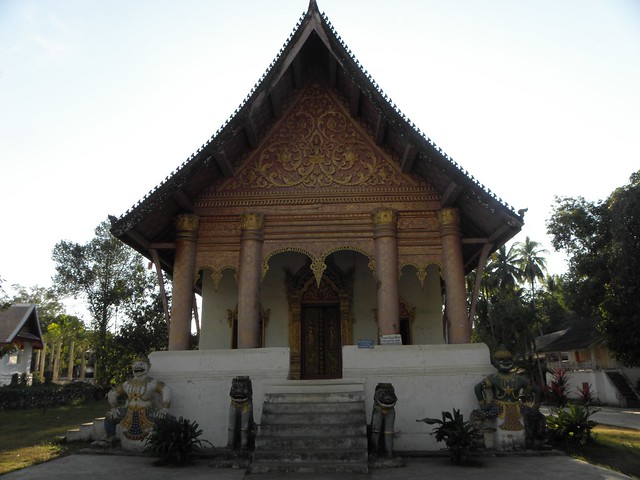 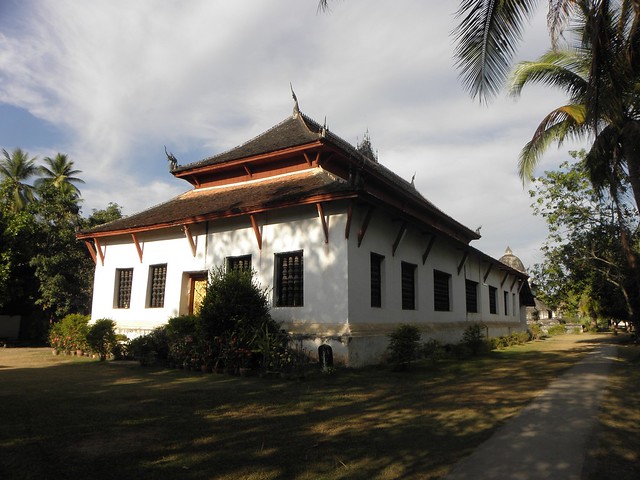 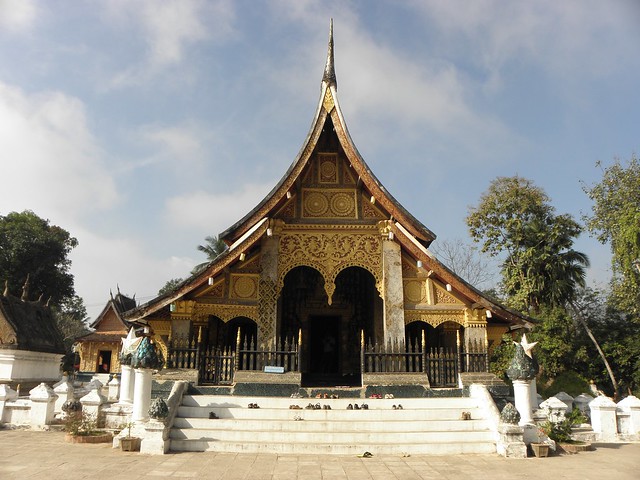 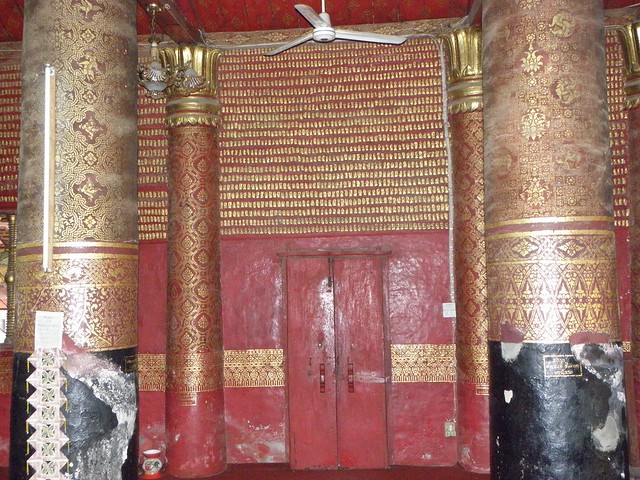 The temples vary in age and size, and whilst many look like relatively modern constructs, some do appear to be much older. 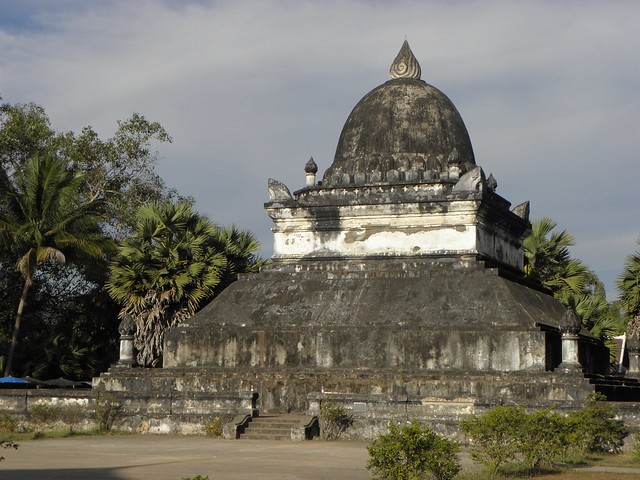 We used the city as a base for a few days to explore the nearby areas of northern Laos, and stayed just outside the city, where we had a rather wonderful view of the nearby area. 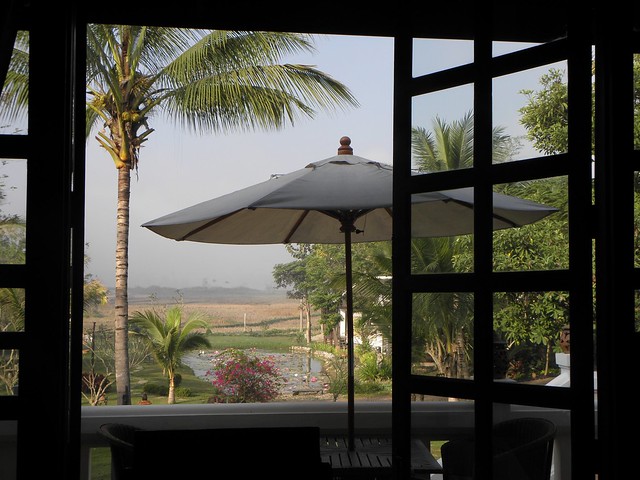 The city was quite quiet by day, and remained relatively quiet in the evening. 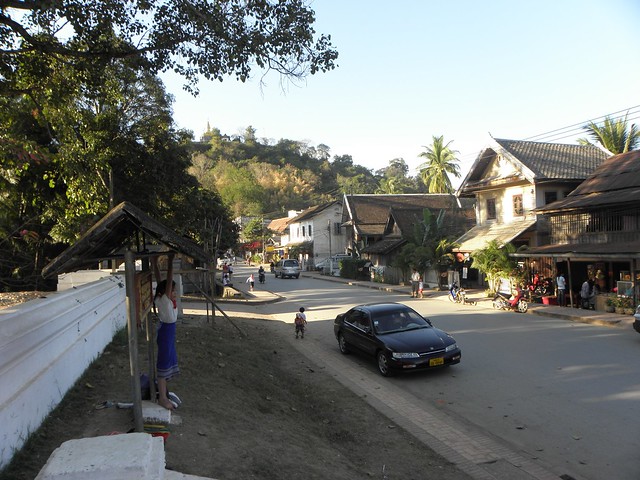 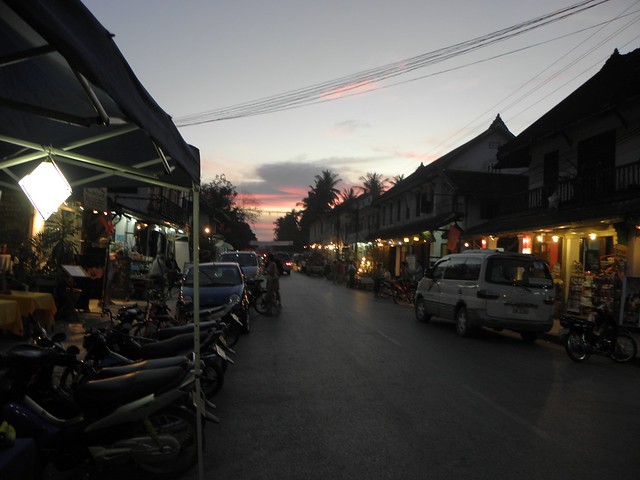 There was generally a relaxed and gentle feel, with the main method of transport around the city being foot given its relatively small size. We explored the place, and visited many of the key sites, including the museum, which had previously been the royal palace.  It was home to various items from the history of Luang Prabang and of Laos, as you might expect.  I asked someone what happened to the royal family after the Pathet Lao came to power.  “The princess lives three doors down the street now”, was the response, keeping the relaxed feel of the place.

We headed into the city for an evening.  The centre was home to a large market typical of that in the region through the evening, where tourists could buy all sorts of items.  Food was a mix of traditional Lao cooking mixed with French cuisine, with a number of French looking bistros in the city centre, and croissants and the like being popular. The city has effectively an unofficial curfew, and we were told that if you were out on the streets much later than about 11pm, the police might politely stop to ask if you needed help to get home.  Given that by 11pm most things had closed, and the streets were pretty quiet, there seemed to be little else to do than to head back to our hotel.

The next morning saw an early start as we headed back into the centre of Luang Prabang for an ongoing religious observance that would have once been popular across the region, and is now a much, much rarer sight.  Most young Buddhist men in the region spend some time as a monk.  This may be a couple of months, or could be a much longer time. The life of a monk is traditional, and one of contemplation.  It should not be one of materialism.  To this end, monks would traditionally depend on the charity of others, and provide charity to those to whom they could.  In Luang Prabang each morning, the monks line up for people to donate alms to them, normally in the form of food.  Rice and fruit will be given to them by those in the city.

The sight of the line of monks queuing for alms at sunrise, waiting for the ceremony to start, did feel like a scene from another time. 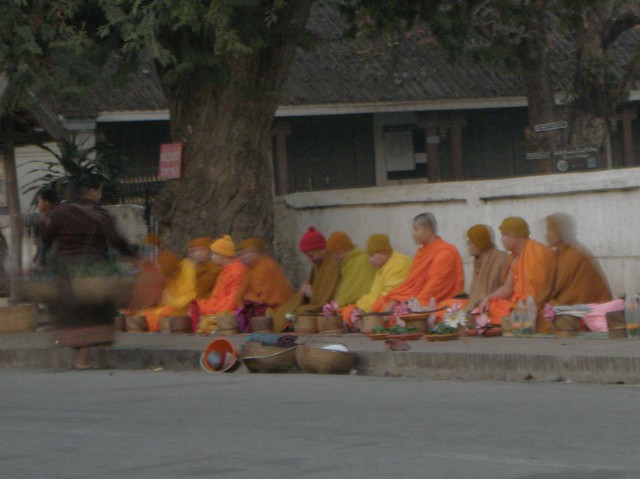 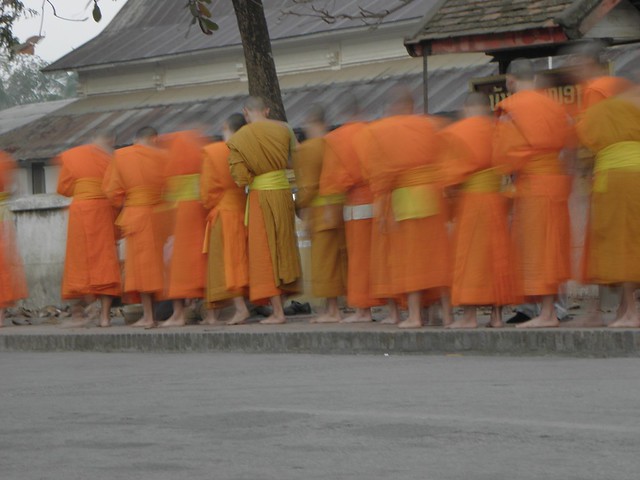 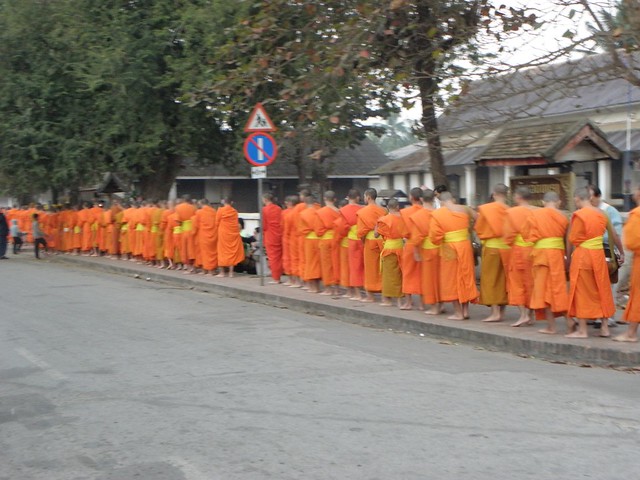 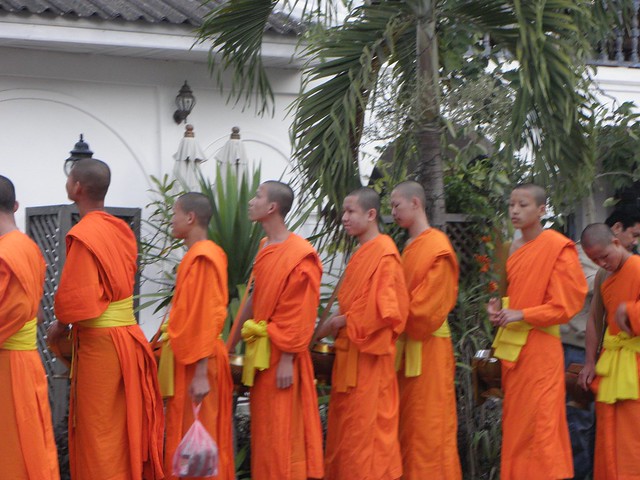 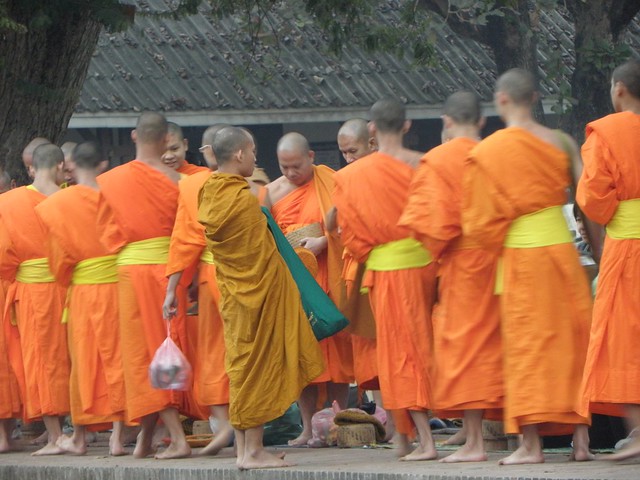 We were advised to allow the monks and those giving alms some space, and to be respectful of this ceremony.  If we were to take photos – which was fine – then we were best to do it from a distance, and without camera flashes.  We followed these instructions, and most – but sadly, not all – of the tourists there did the same.  The most notable exception to those following those simple rules was, oddly, a group of Thai monks there on holiday, in their trendy sandals, wearing designer sunglasses, and who were standing almost beside those giving alms.  The juxtaposition of the Lao monks and the Thai monks showed how different these two neighbouring countries are.

From the giving of alms to the buying of food, we moved to the morning market which was in full swing.  The residents of local villages would come into city to sell their wares in the morning, many of which involved food.  There were various animals and parts of animals that are probably best not described.  There were also plenty of fruit and vegetables that filled the market with colour as well as the smells of fresh produce. 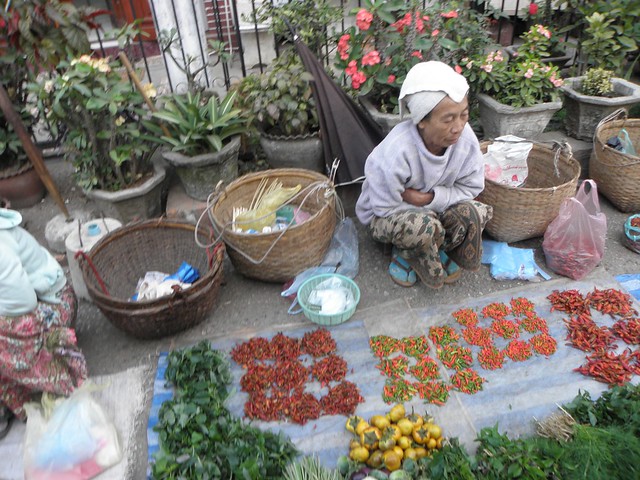 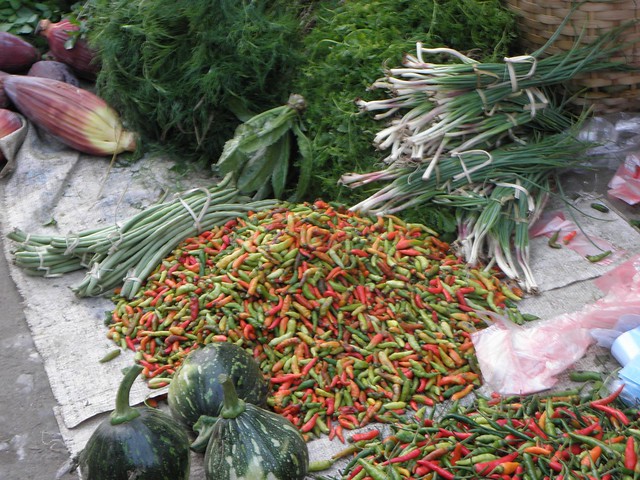 As you can tell from other posts about a trip to Four Thousand Islands, the area is impressive for its sunsets.  We climbed Phou Si, the hill (although it is referred to as Mount Phou Si) on the edge of the town.  There is a temple half way up called Wat Tham Phou Si where the Mekong and Nam Khan rivers are both visible.  At the top of the hill is another temple, Wat Chom Si, and a rather impressive view. 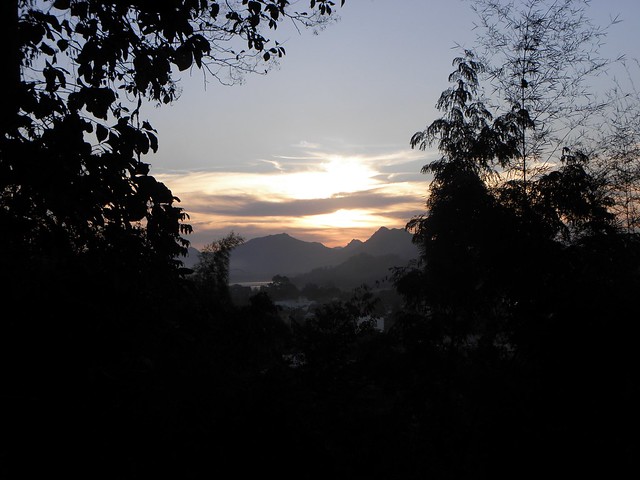