I went to Hong Kong & Macau for the bank holiday weekend, with my friend Steve – of the Vampires of Prague story – which meant that I was expecting at least a few random occurrences. On Sunday, we found ourselves in Macau, which is of course famous for the Macau Grand Prix, to the extent that it is the first thing that you see when you leave the ferry or helicopter terminal. In fact, as @_ChrisUK pointed out on Twitter, Macau is famous for three things; gambling, James Bond and Formula Three motor racing.

@markhaggan To be fair I think Macau is known for three things: Gambling James Bond Formula 3

We thought that it would not be too hard to find a bar somewhere where we could watch the race. There had been a choice of bars within a five minute walk of our hotel in Hong Kong to watch the Qualifying session on Saturday, so we were hopeful.

Our first incident that may have made us nervous was our aborted attempt to visit the Macau Grand Prix museum on Sunday afternoon. We were staying at the Sofitel, a large hotel near the old Portuguese town, rather than on the strip with most of the casinos. We headed down to reception just after 4pm and asked for a taxi to take us to the museum. The chap arranging taxis started phoning, and tried to hail plenty of taxis driving by, but none would stop. After a fruitless forty five minutes, we decided instead to walk to the old town.

We got back to the hotel, and spent a pleasant hour at the top of the hotel, admiring the city, and having a few cocktails. Then, we set off to find a taxi, with the MGM casino being our first choice for Grand Prix watching. We had stayed at the MGM in Las Vegas, and it seemed to show just about every major sport around.

We asked if there was a bar in the hotel showing the race. There wasn’t, but there was a Michael Jackson themed cafe bar, if we preferred to listen to Thriller instead. We declined.

Our tolerance of taxis not stopping was limited this time to 15 minutes, partly because of our previous experience, and partly because of the imminent start of the race, and headed off for the 15 minute walk to the MGM. En route, we tried to flag down plenty of taxis, each wither gave us what can best be described as odd looks, or ignored us. We got to the first casino on the way, and asked if the race was being shown anywhere. The concierge had never heard of the Monaco Grand Prix. We had a quick look, then continued to the next hotel along the strip. For those who have not been to Macau – or Las Vegas, for that matter – then most of the huge, shiny casino complexes are located along one road called the strip. This makes it easy to move from one to another. We went from casino to casino, collecting curious and confused looks about the Grand Prix, until we found one where we had a look of recognition and were pointed towards a room at the other side of the hotel.

The casinos in Macau are huge, and labyrinthal in their design, so the trek across the casino took us through a series of cavernous rooms with people gambling with a variety of methods, and the occasional scream of somewhere who had just lost some money. We found the room where, just in front of us, we could see a giant screen with the build up to the race. Hurrah! However, this was in the “VIP Slot” room, which apparently is only for those who spend particularly high amounts on slot machines. This was not going to be us, and so, we were tantalisingly close to our goal but not quite there. We continued our casino crawl, knowing that the next one up was the MGM, our original target and still our favourite.

“Excuse me, are you showing the Monaco Grand Prix anywhere in the casino?” The staff at the MGM looked at us with confusion.
“The what?”
“The Grand Prix. The Formula One race. You know, motor sport”.
“Grand Prix?”
“Yes, the motor sport. Cars. There’s a big race in Monaco”.
“Never heard of it”.

However, they did make some suggestions as to where we might watch it, and we found ourselves passing a series of increasingly salubrious looking bars with TVs inside, and people outside encouraging us to have a seat and a drink. We passed bars showing football, basketball, tennis, and boxing, but no Grand Prix. The last bar had no other customers. We asked if they would turn the TV over. No.

We kept going – even though we knew we had now missed the start of the race – and found one more casino. We started what had become our standard conversation with the resigned inevitability of puzzled looks. This time, however, we had a different response. The person we asked didn’t speak English, so got a colleague who did. However, he was not confident enough to answer a Grand Prix related question, and got another colleague who could speak even better English. They weren’t showing the race, but could recommend somewhere that was. It was an african themed bar called AfriKana at Fisherman’s Wharf.

The hotel staff wrote the name of the bar and its address in Chinese on a card, and we took it to a taxi at the rank outside. A blank look from the taxi driver, and a shake of his head. We continued to the second taxi in the rank. A similar reaction. And from the third. And the fourth. And the fifth. The concierge came to help. The drivers did not want short journeys, he explained, and generally wanted jobs that involved taking gamblers to and from the mainland China border. They had a good idea that we did not fall into this demographic.

The concierge then repeated our unsuccessful trip through the five taxis in the rank. We asked about walking directions. Too far, we were told. Then the concierge called in the assistance of a policeman. I should say at this point that we had not seen a policeman anywhere in Macau up to this point, including right before the concierge asked for help. The policeman just seemed to appear in a way I found reminiscent of the shop keeper in Mr Ben…

The policeman had some stern – very stern – words with the driver, and lots of pointing at his taxi licence. We got in the taxi and mumbled a few sorrys in a very British way, apologising for getting the taxi driver into trouble. We were worried that we might now get taken to the middle of nowhere and dumped, or even worse. The earlier cocktails were fuelling our imagination, and we were trying not to think about what could now go wrong that we were in a city we did not know that spoke a language where we could say nothing more than “hello” and in the taxi of a man who had just had a hard time from a policeman because of us.

In fact, nothing unusual happened. We were taken to Fisherman’s Wharf, and we paid the £2 taxi bill. That might be why drivers there are not keen to take a short journey. We walked through Fisherman’s Wharf – yet another new casino, leisure and entertainment complex – and struggled to see what the connection was with either Fishermen or Wharfs, other than being near the sea.  We arrived in a rather quiet Roman themed area, complete with a shopping mall. 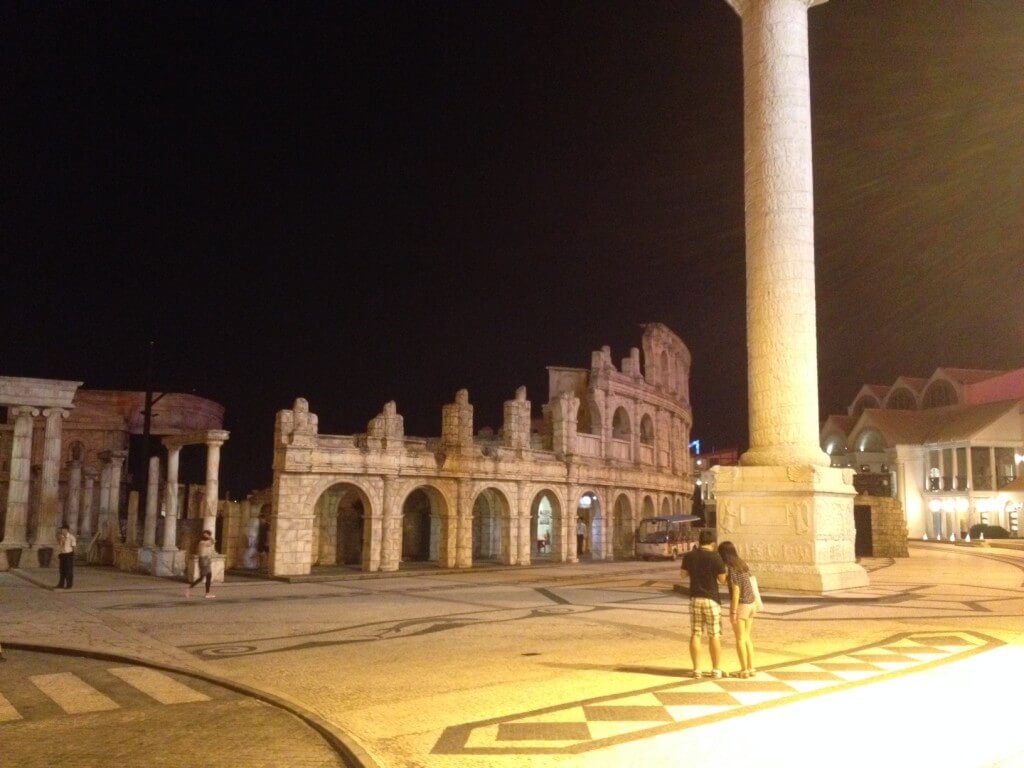 The Roman area at Fisherman’s Wharf in Macau

We kept going, and found AfriKana. It didn’t look very busy. There were a series of huts around a large hut type building in the middle, filled – of course – with gambling machines, many of which involved playing darts. Beyond this, was a bar, with a TV showing a soap opera. There were no other customers. We asked if they would change the channel so we could watch the Grand Prix.
“Oh, is there a Grand Prix on? Sure, I didn’t realise. What race is it today?”
So, at 9pm, an hour into the race, and after a bit more than two hours exploring Macau – but not quite as we planned – we settled down to watch the race, accompanied by the bar staff, and a cold beer. 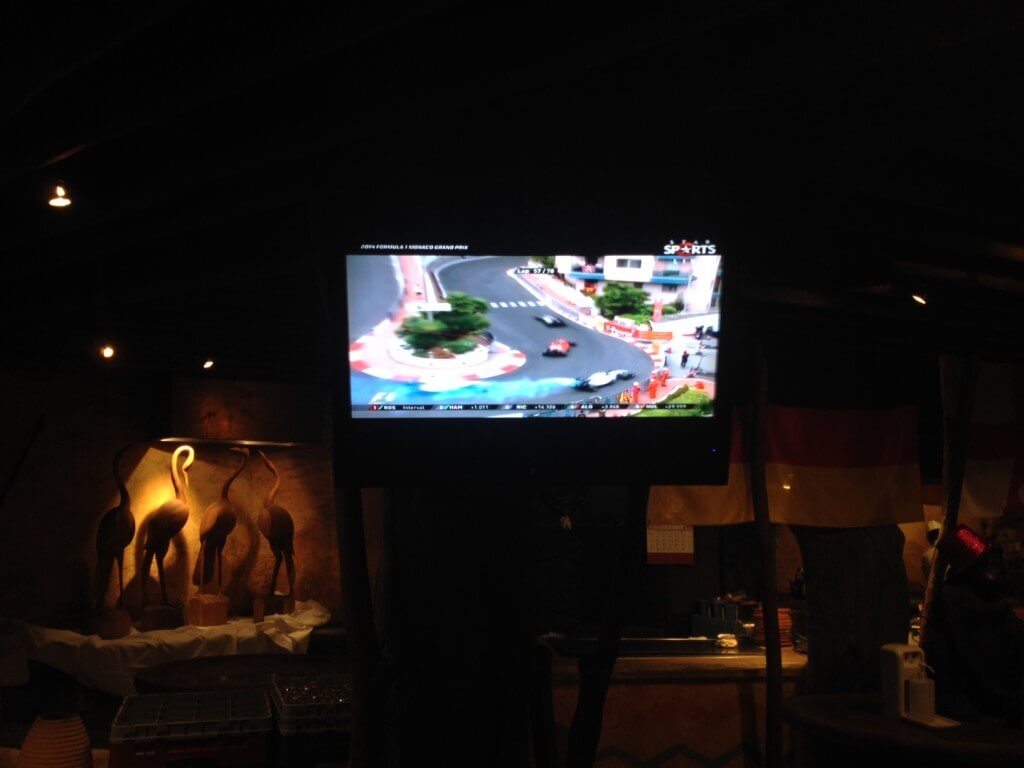 About ten minutes later, we heard a band start playing, and suspected that the reason we had not seen any other customers was that they were watching the band, not the race.

We enjoyed the race – or at least what we saw of it – and thanked the staff, and left a tip. We went to watch the band play, and realised that we were now the second of two tables occupied watching a band perform very credible covers of modern songs and 1980s pop rock and power ballads. They were actually quite good, although this was now after several cocktails and a few beers. We clapped when they finished a song. This seemed unexpected, but welcome. At their interval, we realised that the people at the other table were the friends and family of the band. We felt a little sad that this most helpful of bars, where we had watched the race, seemed limited in their custom that evening to just us. However, they did point out that it was Sunday evening, most people were going to work the next day, and they had been rushed off their feet on Saturday evening.

You will be pleased to hear that our trip to the Grand Prix museum on Monday was more successful than that on Sunday.

My tip for visiting the museum, if you are struggling with taxis, is to get a shuttle bus to the ferry & helicopter port – all of the main hotels operate a free shuttle bus system – then walk to the museum.  It’s not that far, and you get to see some more racing connections in the car park at the bus depot.

So, the one lesson that I will take from the trip, is that if I am in Macau again wanting to watch a Grand Prix on television in this home of motor sport, look for an african themed bar. Obviously….