Most people have heard of Angkor Wat in Cambodia, the famous temple complex, and increasingly, people have heard of some of the nearby temples like Ta Prohm, that I have previously mentioned.  However, there are a series of impressive ancient temple complexes in the region that are less famous, but are still remarkably impressive.  Among these is Wat Phu, or Vat Phou, in southern Laos.  Wat Phu is about four miles from the Mekong river, in the Champasak region.  Our journey there included a ferry crossing of the Mekong on a rather interesting boat that I have mentioned before…

One of the first things that we noticed when we arrived at the temple complex was how few people were there, particularly since we had been to Angkor Wat a few weeks before.  There were a few tourists, but they were outnumbered by the archeologists there, and there were not too many of them.  We were told when we were there that archeologists had relatively recently returned to the site after some of the unexploded ordnances from the Vietnam war were made safe.  Laos was neutral during the war, but the Viet Cong used to move through Laos as part of the Ho Chi Minh Trail.  The US bombed Laos, flying 580 000 bombing missions over the country and dropping two million tons of ordnance, making Laos the world’s most bombed country per capita.  Of the 270 million cluster bombs dropped on the country, it is estimated that 80 million did not explode.

Wat Phu is built on a hill and orientated towards the east, as is the norm for Khmer temples. It was designated a World Heritage Site in 2001.

We arrived, and found this set of steps that looked like they had jumped off the pages of a fantasy novel. 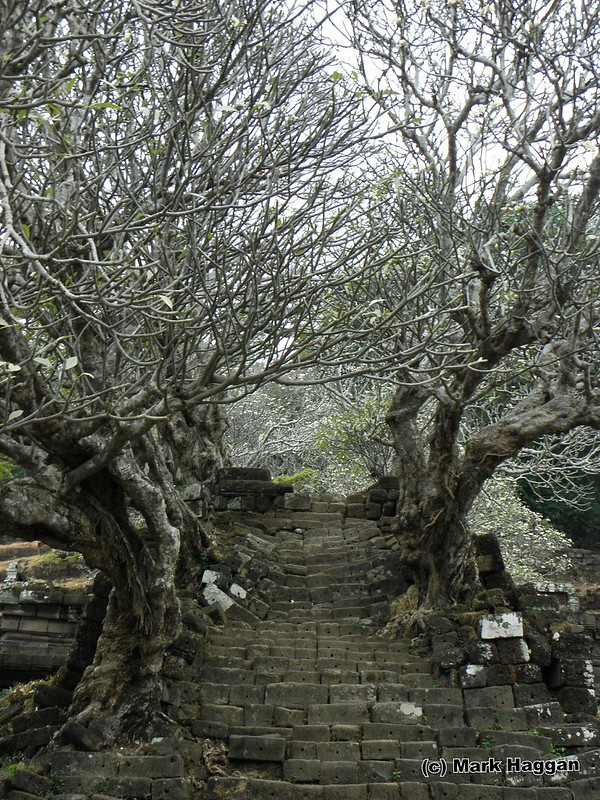 Climbing up the steps and up the hill gave a great view of the site around us. 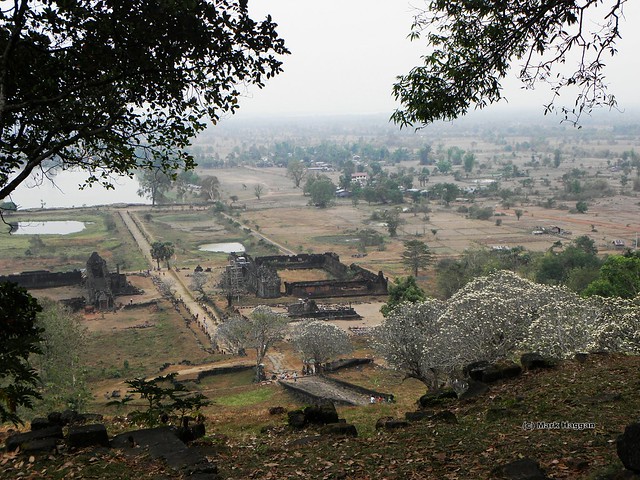 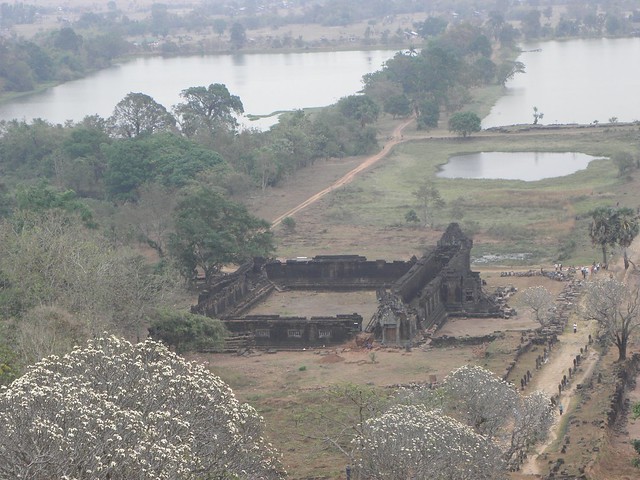 Like most Khmer temples, the walls of the building of Wat Phu are decorated. 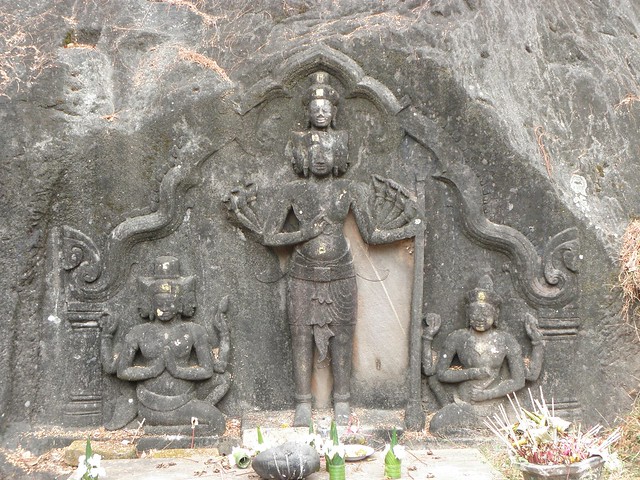 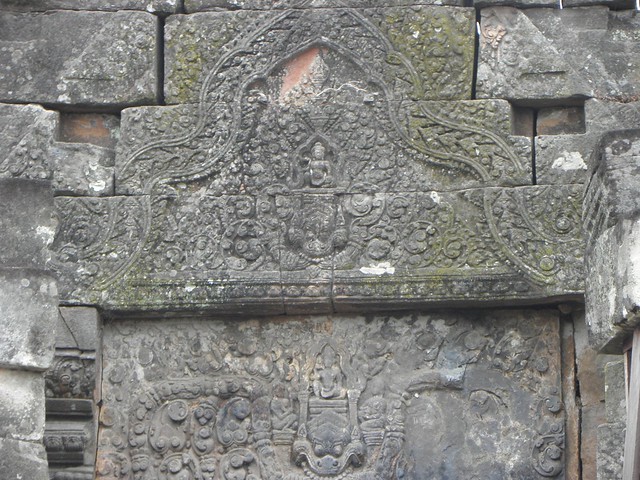 Archeologists were making up for lost time, with teams working on the various parts of the expansive complex. 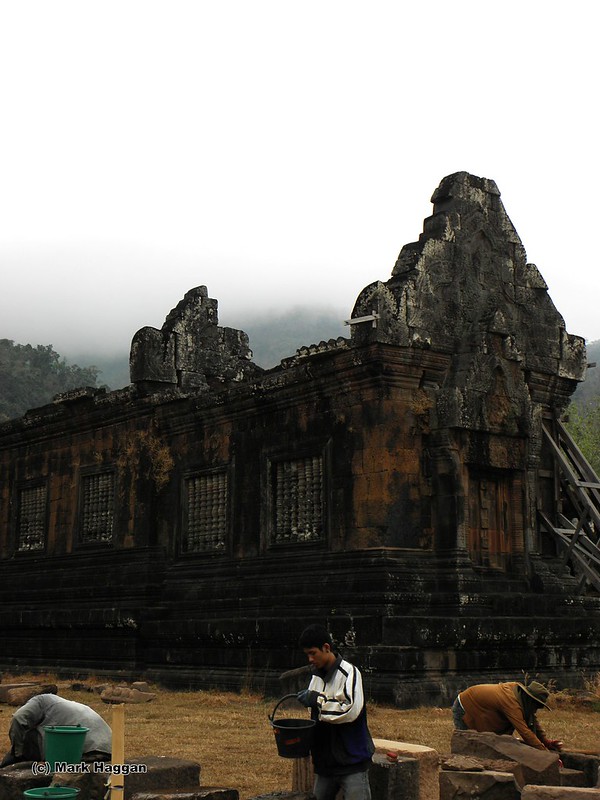 One of the things, though, that I did not expect to see at this, or any other Khmer temple, was a possible place of human sacrifice.  Any such sacrifices at this site, if they did in fact happen, were done in the pre-Angkorian days, and as was being explained to us in the photo below, it is possible that this carving was where an annual sacrifice might happen, with the shape designed to capture the blood of the unfortunate victim. 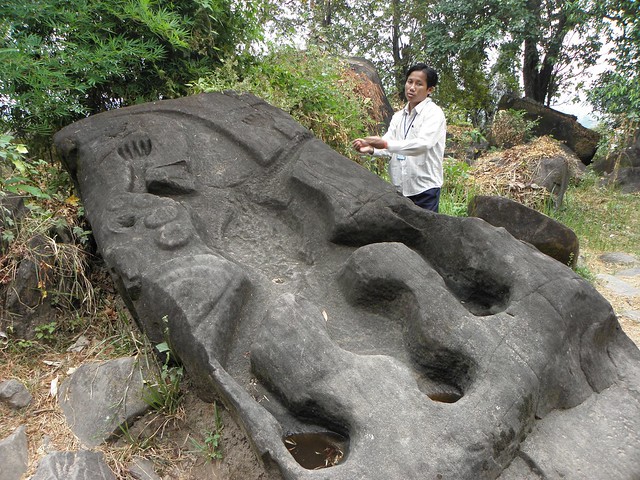 Behind the temple was rainforest, with clouds hanging over them in this relatively high location.  It felt rather strange being in such an impressive site with so few other people there to witness its magnificence. 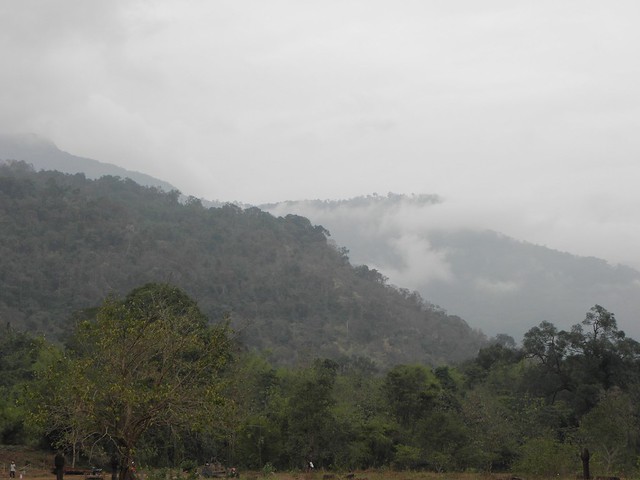 One of the oddest things about the trip, though, was the ferry that we used to cross the mighty Mekong.  It did have a somewhat homemade feel to it, and whilst I was keen to have a look at the construction of the vehicle, my fellow passengers were most interested, and amused, by the rather large European who was joining them on this crossing. Obviously, I thought, there is nothing unusual about a ferry made up of a few slats of wood joining a couple of boats together… 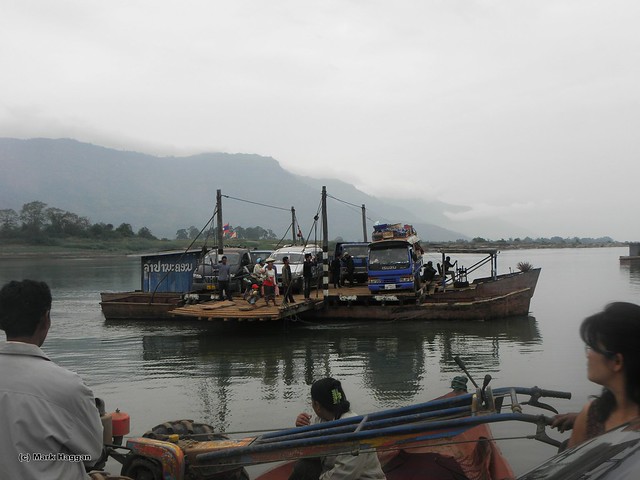