I have commented recently on visiting both Damascus and Crac de Chevaliers in Syria, and I mentioned in both that I was on my way to Aleppo at the time. Aleppo, or Haleb in Arabic, is the largest city in Syria, and like Damascus, is one of the oldest constantly inhabited places on the planet, with the city stretching back to the sixth millennium BC. One possible reason for the name Haleb is related to milk as the story goes that this is where Abraham gave milk to travelers as they moved through the area.

Before we could get to Aleppo from Crac, though, we passed by Apamea, the ruins of an ancient city not far from Hama. There are so many stunning archeological sites in the country that sites that anywhere else in the world would be a haven for tourists are remarkably empty, and you can sometimes be the only person there. We shared our time at Apamea with two or three other people, so far from being crowded. 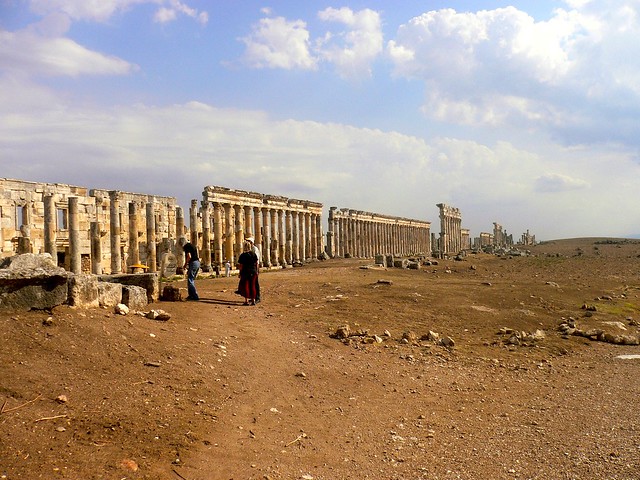 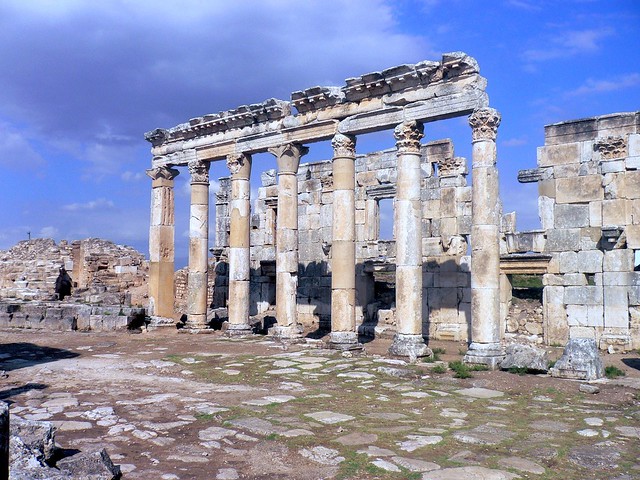 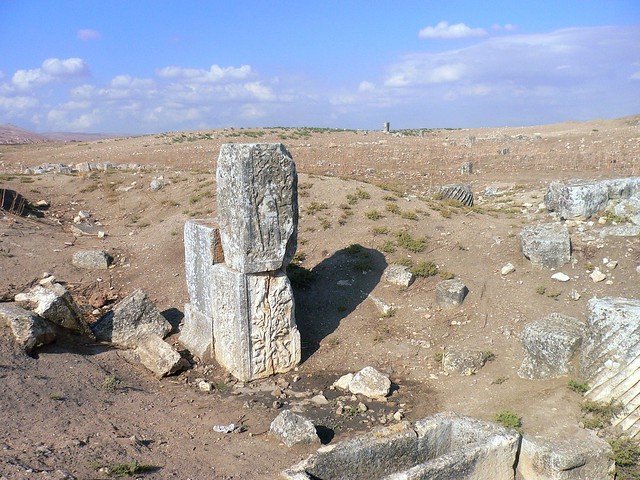 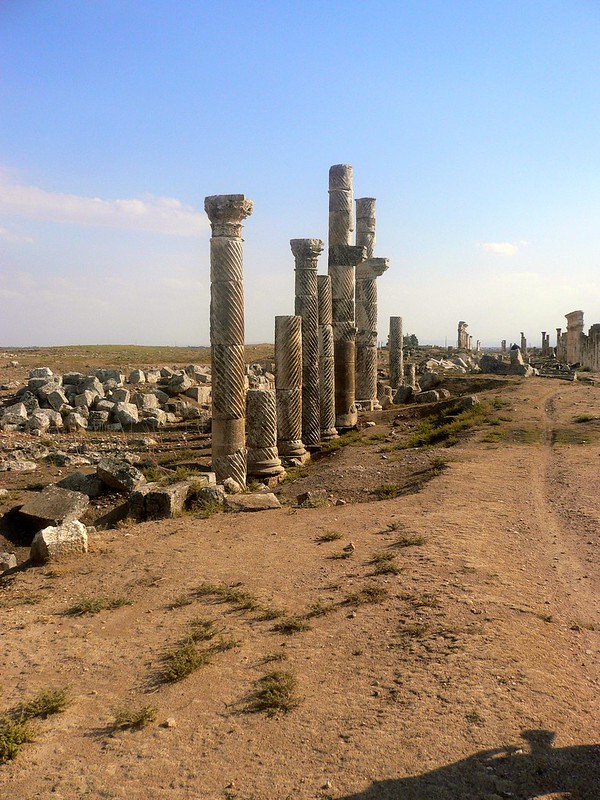 Many of the parts of the town have survived well, and water channels can still be seen, that appear to still have an ability to hold water. 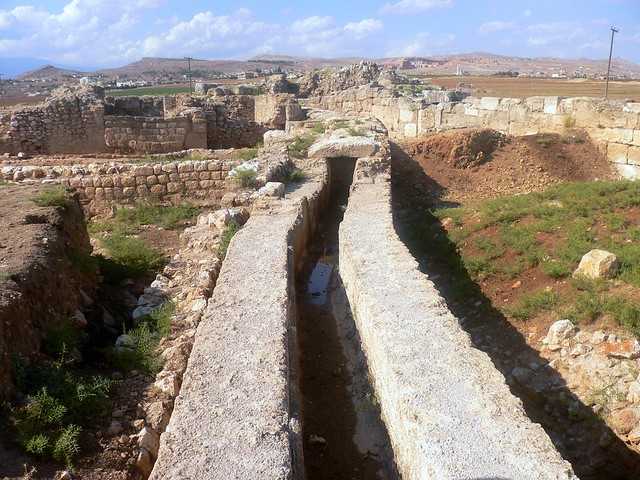 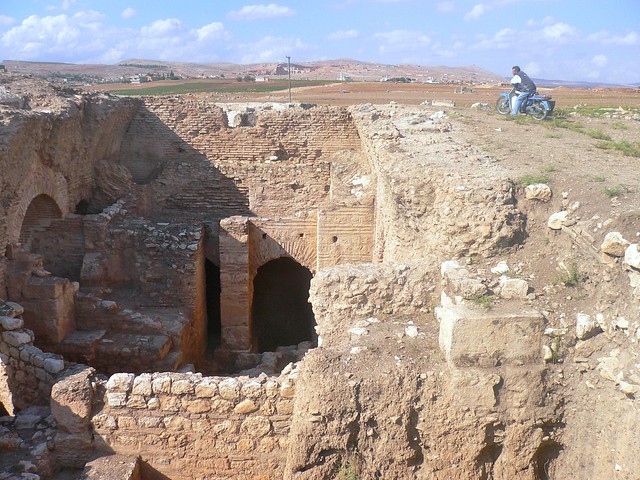 It was quite a place for a stop on our journey, and certainly rather scenic. 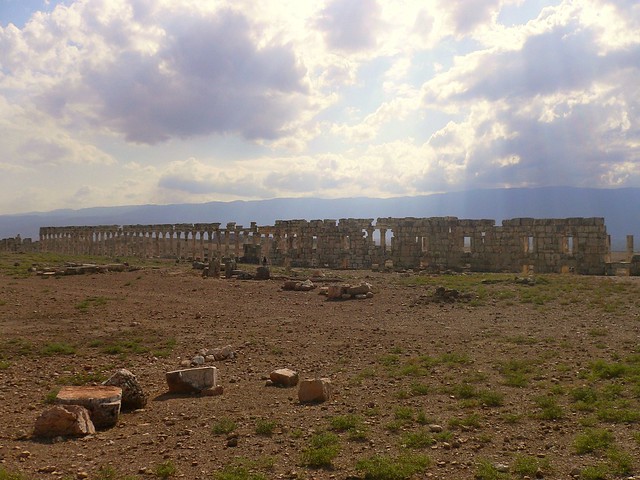 There are many things for which Aleppo could be known, and it always quite surprises me that it is not particularly well known around the world. Until the building of the Suez canal, Aleppo marked the end of the Silk Road, and was a major trading place. The souq, or market, is huge, containing miles – literally – of little streets and alleys where you can buy just about anything. Sadly, it has been reported that the souq has sustained much damage in the current conflict there, which given that these current markets date back to the 14th century, is particularly tragic. 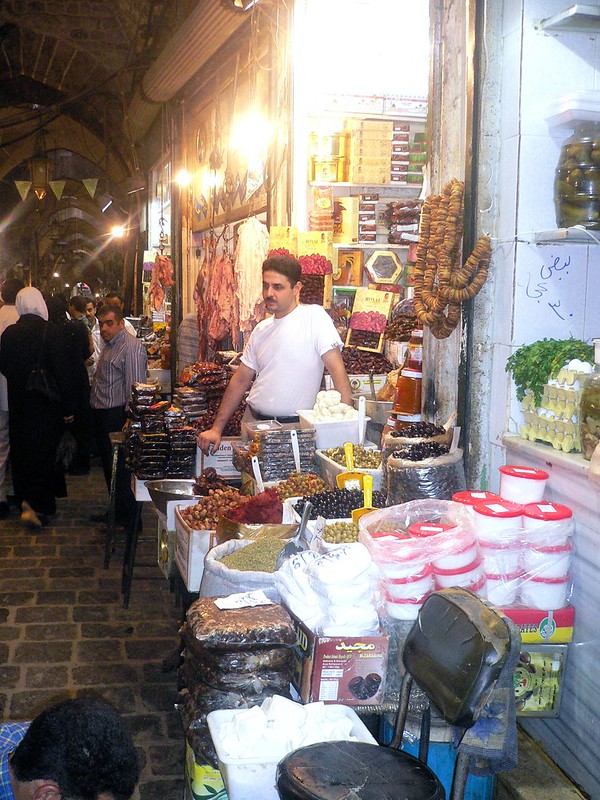 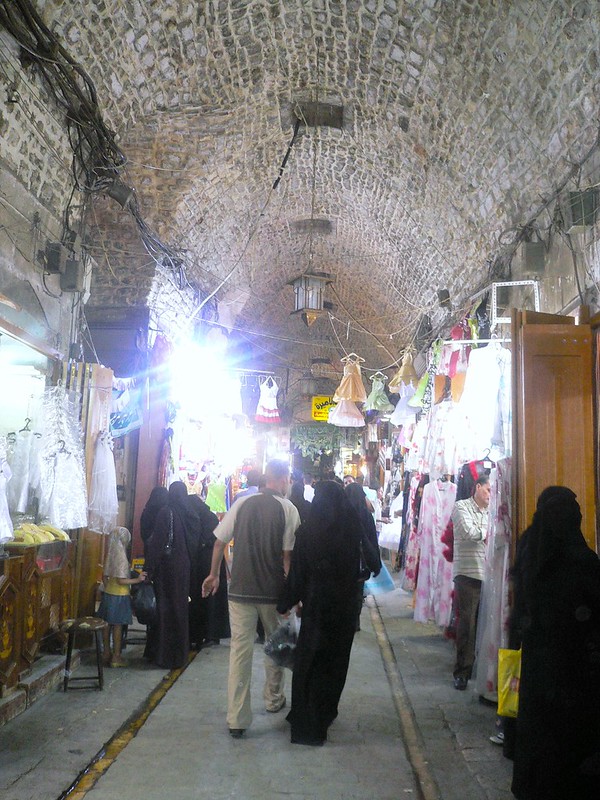 The centre of the city is dominated by a huge citadel, surrounded by a wonderful series of cafes where you can watch the world go by. We found ourselves sitting in the café and happened to bump into four or five groups of people that we knew there. Most odd! The citadel, though, is such a wonderful and imposing sight that I am surprised that it is not better known. 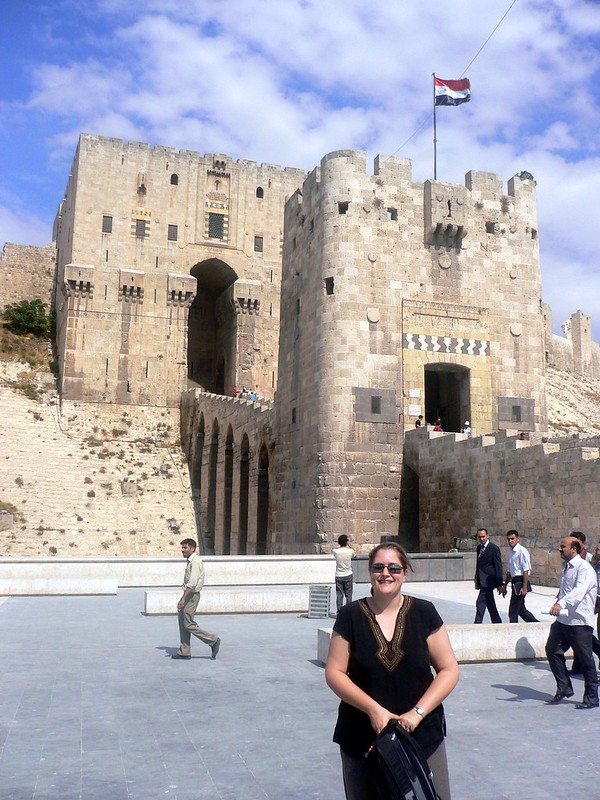 The citadel is believed to be one of the oldest castles in the world, with the site dating back to the third millennium BC, and is a huge site. The area has been improved and the fortifications strengthened over the years and through various invasions to give the current citadel. Given its location in the centre of the city, it provides a great vantage point over the city. 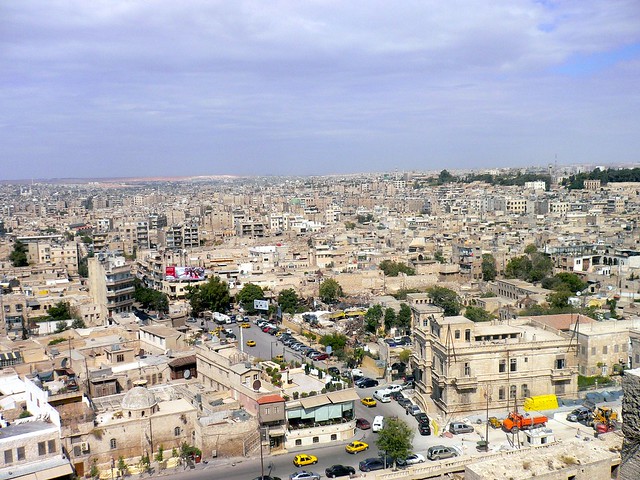 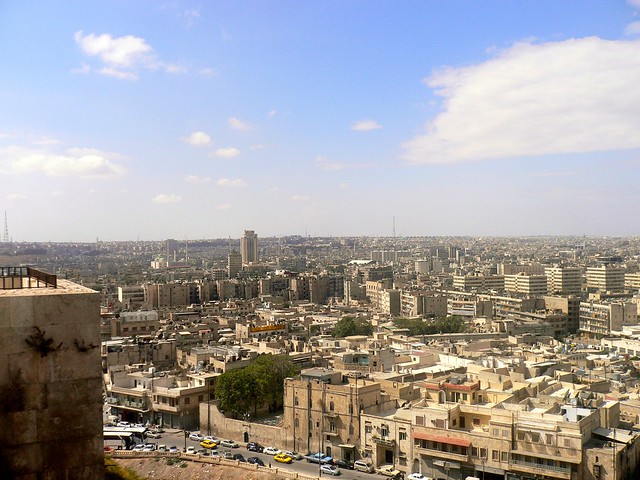 The city is also home to The Baron Hotel, which gives an idea of what this city must have been like in the not too distant past. The current hotel was built in 1909, and extended in 1911 and again in 1940. Lawrence of Arabia stayed in room 202, but did not pay his bar bill when he left, which is still hanging in the bar area. Agatha Christie wrote the first part of Murder on the Orient Express when staying at the hotel, and King Faisal declared the independence of Syria from the balcony of room 215. Other guests have included Charles de Gaulle, King Gustaf VI Adolf of Sweden, Gamal Abdel Nasser, Sheikh Zayed bin Sultan Al Nahyan (founder of the UAE), and David Rockerfeller, all of whom stayed in the presidential suite, of course. Julie Christie, Theodore Roosevelt, Kemal Ataturk, Lady Mountbatten, Charles Lindburgh and Yuri Gagarin have all been guests in the hotel. This list of the rich and famous gives some idea of the importance that this city enjoyed in the world once upon a time. 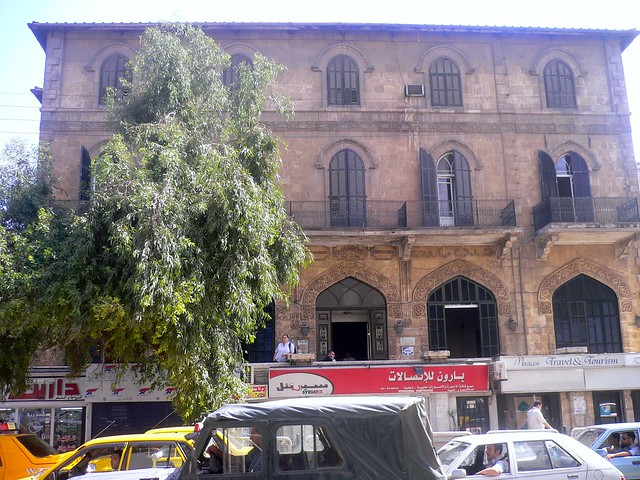 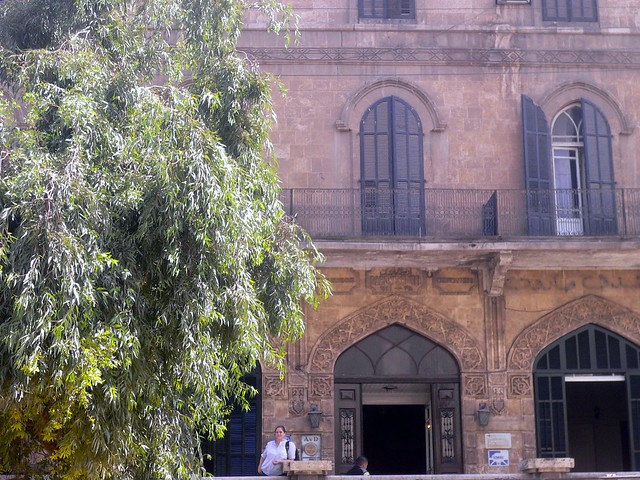 Of course, I did have to pay a visit to the bar there, just to see the unpaid bill…. 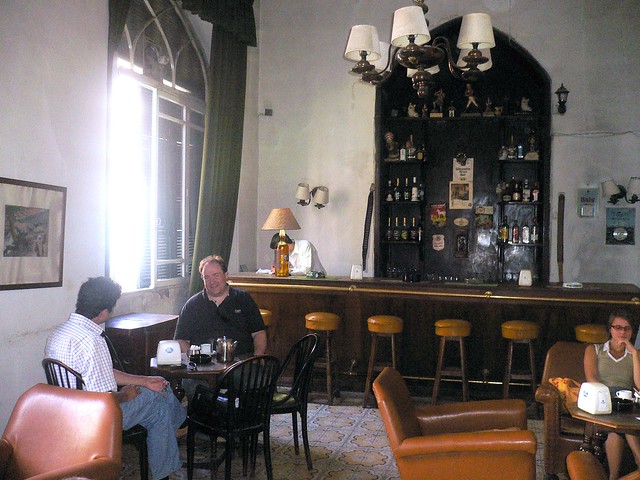 The city has a collection of interesting little lanes and streets, and we managed to find a hotel in the middle of this that included having breakfast in the very old basement, but enjoying dinner on a roof terrace looking over the city. 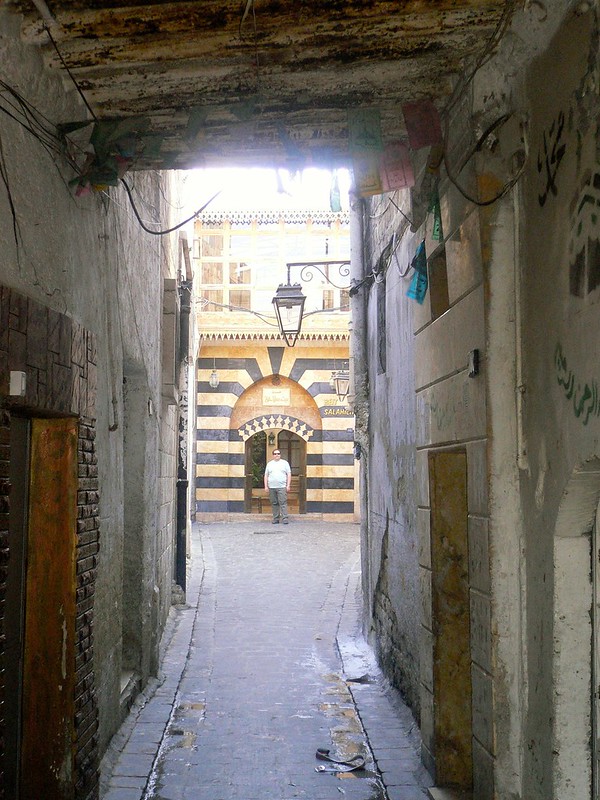 Another interesting part of the city is the Armenian quarter, which is a very pleasant area for a stroll. 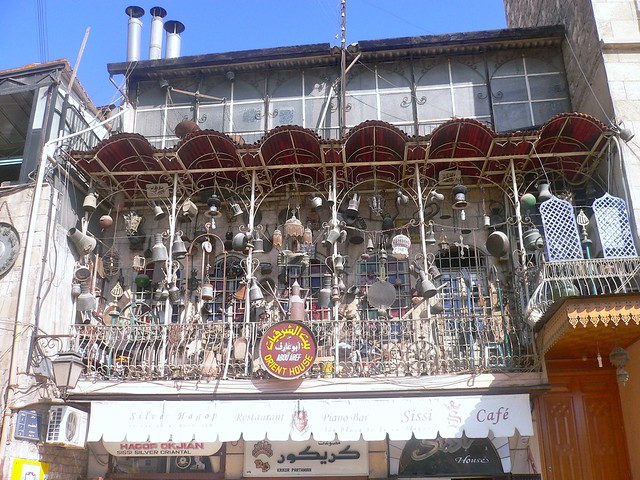 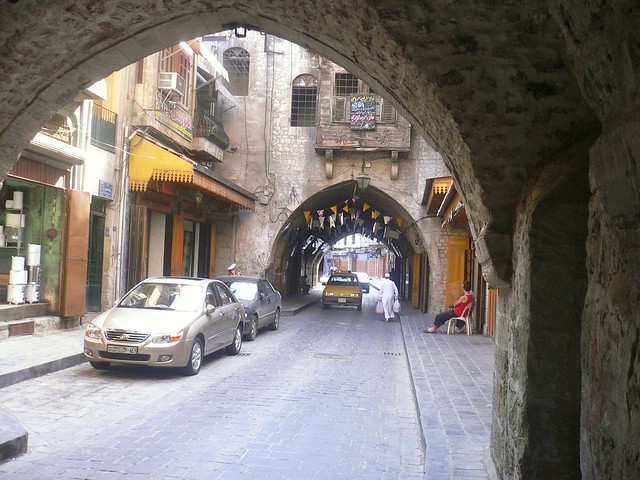 It was an interesting and vibrant city, but has suffered in the recent conflict. There are a series of interesting places to visit both in and near the city, and we spent a number of days in the area exploring, before heading East towards Iraq. I will leave that, though, for another post.