I have commented recently about travelling through Syria, from Damascus to Aleppo via Crac de Chevaliers. We made some trips from Aleppo, for example, up the Bastion of St Simeon Stylites on the Turkish border, one of the very many historic sites in the area. The Bastion, however, finds itself in the curious position of being a site of ancient ruins that is also home to two world records. If you have given up anything for Lent this year, and have been waiting for the arrival of Easter so that you can indulge in alcohol, chocolate, or whatever else you have given up, then spare a thought for the most famous resident of this place. 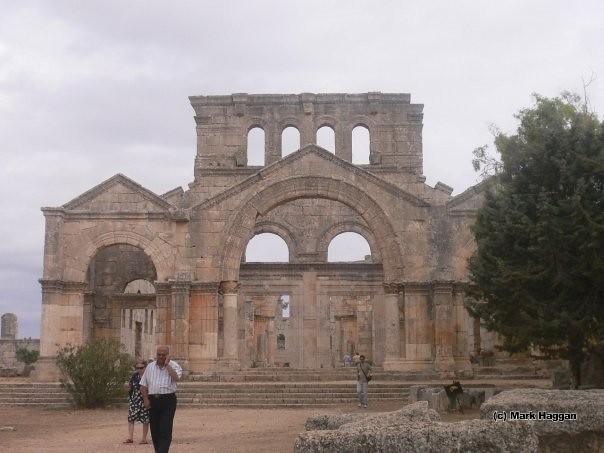 The Bastion, or Church of St Simeon Stylites is an interesting place. St Simeon Stylites was the son of a shepherd, born around 390AD, and he became very religious from around the age of 13. He started fasting and observing other austerities, before joining a monastery at the age of 16. One year during Lent, during which he was fasting, the head of the monastery left him some water and loaves. When other monks went to check on him a few days later, he was unconscious and the water and bread was untouched. They took him back to the monastery, and found that Simeon had bound his waist with palm fronds that were so tight that it took days of soaking to remove them from the wounds they had left. Simeon was requested to leave the monastery after that. He locked himself in a hut, and went the whole of the next Lent supposedly without eating or drinking, which was hailed as a miracle. He would stand up as long as he could without falling over, before leaving the hut after one a half years, and moving to a rocky area on a mountain, and limiting himself to a small area of that mountain. He was followed by crowds of pilgrims asking for his advice, which prevented him from concentrating. There were ruins nearby, and he found a pillar that he climbed the four metres to the small platform on top, where he stayed. Local children took him flatbread and goats milk that sustained him. He got a larger and larger pillar built, and eventually had a 15m high platform on which he lived. The natural image of this part of the world is of a hot desert, and whilst the summers are very hot here, the winters are very cold, and can include snow.
Simeon banned women from coming near his platform, including his own mother. His mother accepted this, and lived nearby, also in a state of retreat, living the silent life of monasteries. When she died, Simeon asked for her remains to be brought to him, to allow him to say goodbye.
Simeon spent an incredible 37 years living on top of his pillar, before he died in 459. Many other holy people copied his lead of living on a pillar.

The location of his pillar is now known as the Bastion of St Simeon, or the Fortress of St Simeon, or locally, Qala’at Semaan, north west of Aleppo. There are four basilicas on the site, built out from an octagonal court towards the four points of the compass to form a large cross. The column on which Simeon stood is located in the centre of the court, and is now topped with a boulder rather than the column itself. 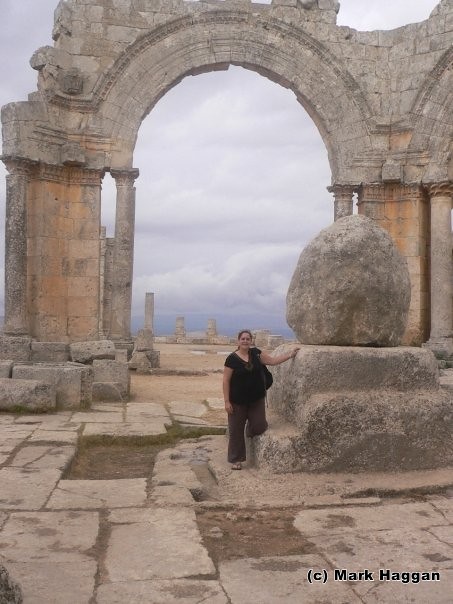 The column was known as a style, hence the name St Simeon Stylites. Linking him to the modern world, the Guinness World Book of Records lists not only Simeon as being the record holder for the longest time sitting on a pole, but the longest anyone has held a record, now he is approaching 1554 years as the record holder.

The location of Qala’at Semaan is stunning, on a mountain looking over Turkey, with beautiful olive trees growing around the site. I know that many religions contain some sort of self-denial as a remembrance of things more spiritual like the Christian period of Lent when Christians will remember the 40 days that Jesus spent fasting in the wilderness whilst being tempted by the devil, when Christians will give up something during Lent on the lead up to Easter, giving the origin of Mardi Gras or Pancake Day, when the excesses would be consumed before Lent, allowing Christians to be shriven, or obtain absolution for sins through confession and penance, hence the term Shrove Tuesday.

Interestingly, I visited the Bastion of St Simeon during Ramadan, the Islamic month of fasting.
There are many people in many religions who make these abstinences for periods of time, and I am have an enormous amount of respect for those who can observe a month of fasting or other difficult abstinence. However, it is hard to see how St Simeon’s 37 years on a pillar will be beaten in the near future, although I am not entirely sure I understand the benefit of anyone attempting to beat it.