As you may know, I quite like wildlife. I have spent time with all sorts of creatures, including, as I previously mentioned, a herd of reindeer and some Bedouin camels, and among the list of creatures that I have had the pleasure of spending some time are a series of birds of prey. If you have not tried falconry, or not seen falconry, then it is quite an incredible site to see these beautiful creatures in action. I should say that falconry started as a form of hunting, and it is still used as a form of such. These birds fly to find food, and even when you are just admiring the spectacle of these wonderful creatures, they will be out searching for living creatures to catch and eat. It’s not an event for the squeamish, as even during a display, there is every chance that a bird will catch an animal, kill it and eat it.

I became more aware of falconry when I lived in Kuwait, where it is a much more popular activity than in the UK. I remember people talking lovingly about their hawks, and the effort that had gone into training them.

When I tried falconry, one of the key birds involved was a Harris Hawk called Cassie. I was there with a friend called Caz, who was quite accomplished in falconry, and a bit of an expert in the terminology. Cassie is not just a beautiful bird, but rather clever too. 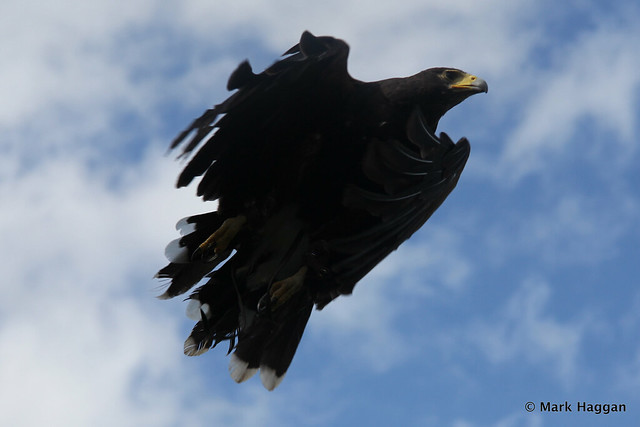 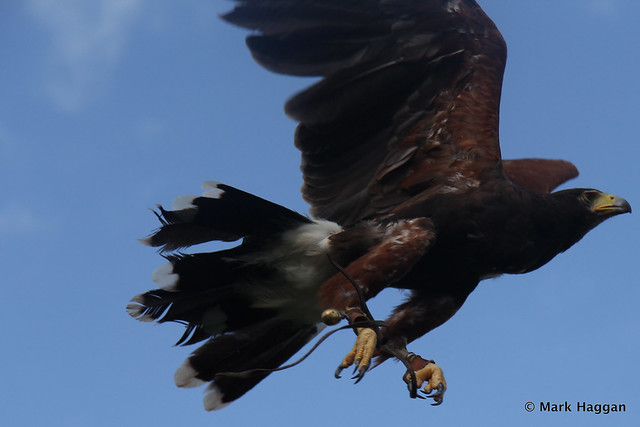 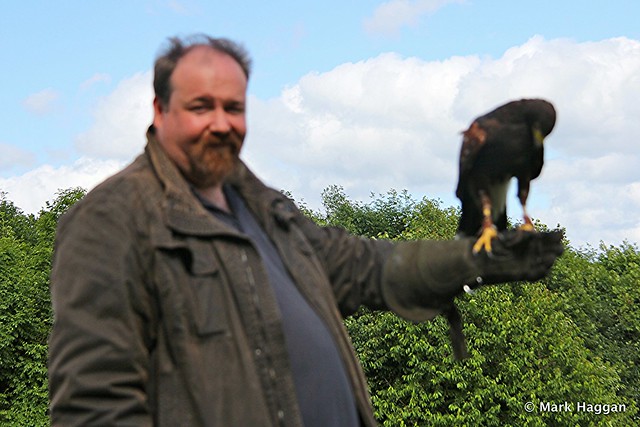 The traditional way to train a bird like Cassie is through the provision of food. This is also a good time to mention that there are a number of phrases in use in English today that derive from Falconry. A bird like Cassie can be provided with little bits of food in return for carrying out the tasks requested. Of course, it gets to the stage when the bird has had enough food, and will not do other things for food, or go hunting, because it is full, or “fed up”. Equally so, a hawk will be under a more tight control when its leash is attached to the fist of the falconer, either “under his thumb” or “wrapped around his little finger”. When a bird flies away, it “turns tail”. Shaking a bird’s feathers is knowing as “rousing”, and the device used to recall a hawk is a “lure”. Thank you to Caz for all of that. 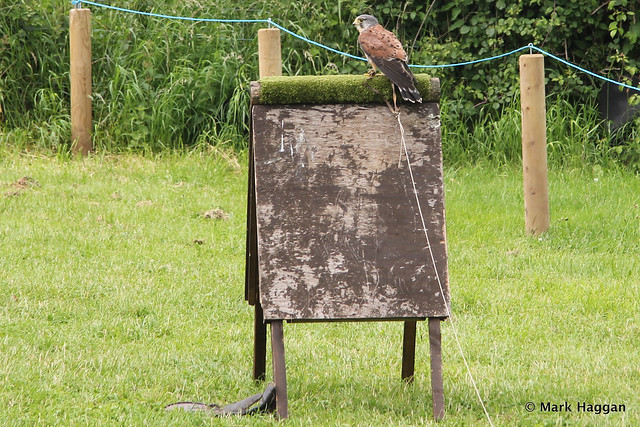 If you were unsure just how quiet these creatures could be, then just do what I did. Lie on the ground and have the bird swoop over you on the way to pick up some food whilst you have your eyes closed. You will have no idea that it has passed by only a foot or so from your face. 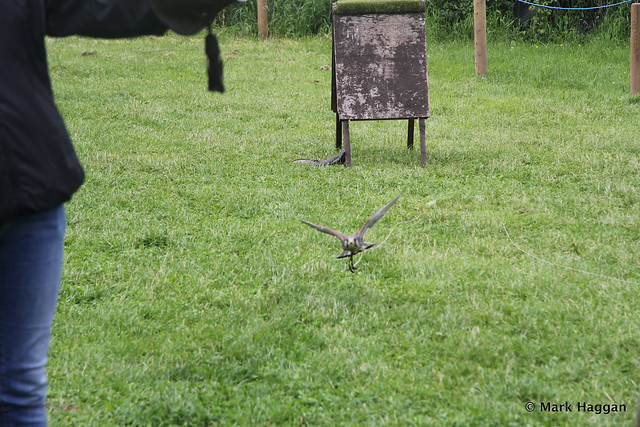 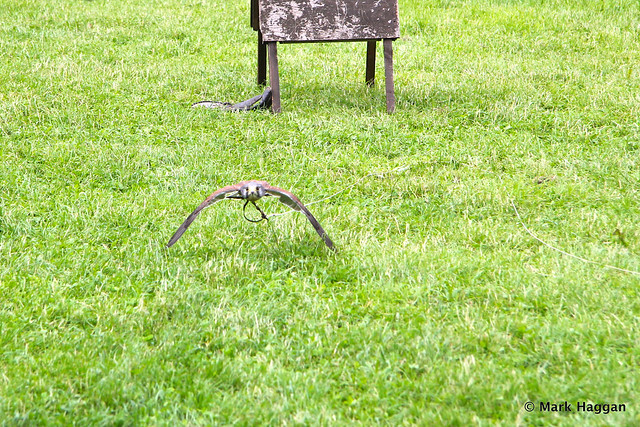 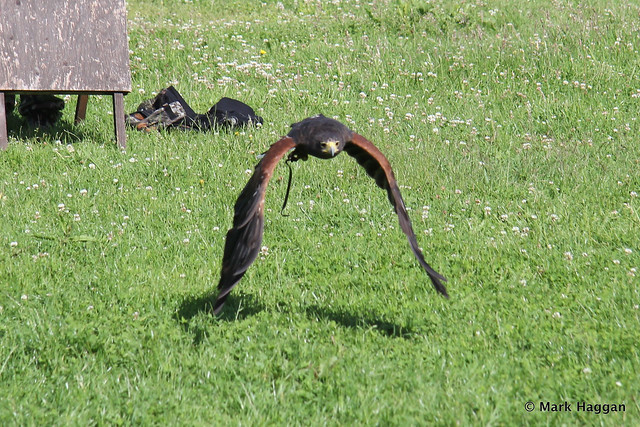 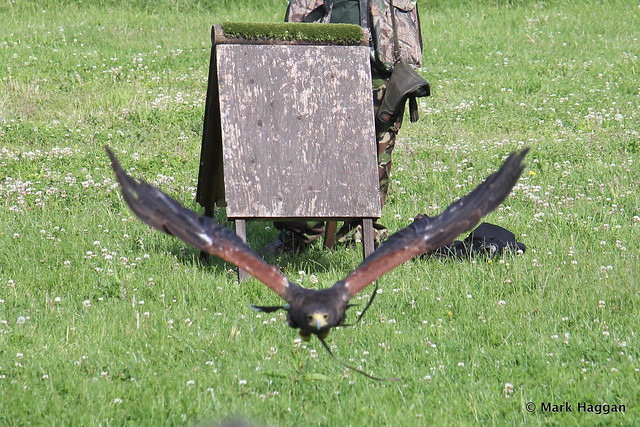 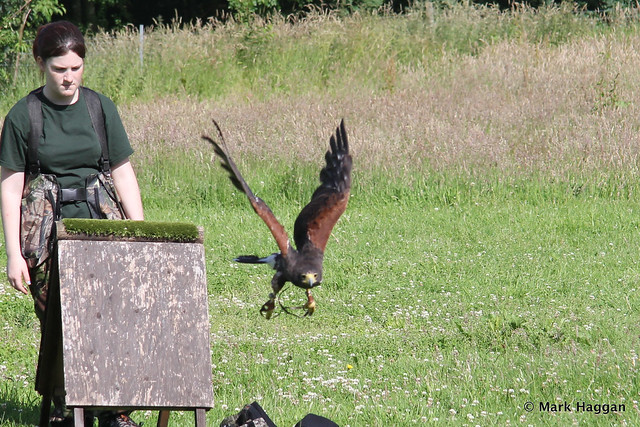 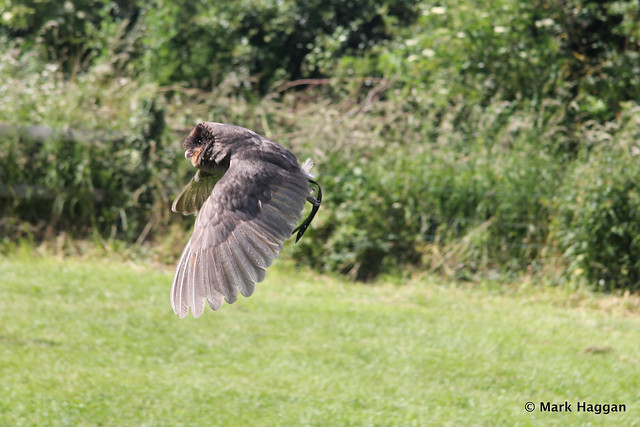 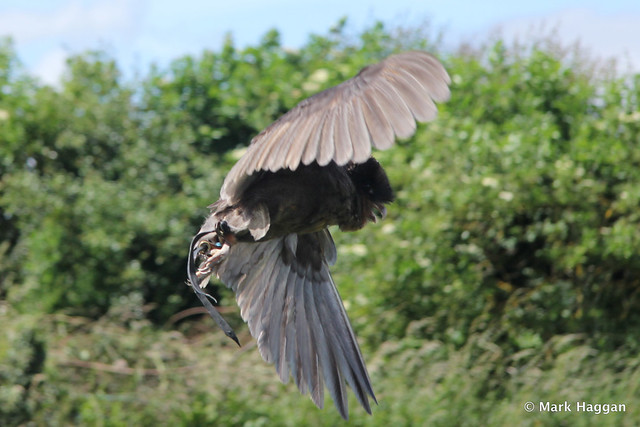 Throwing some food into the air and seeing just how quickly and efficiently that Cassie could take it also gave a great idea of just how efficient a hunter this creature can be. 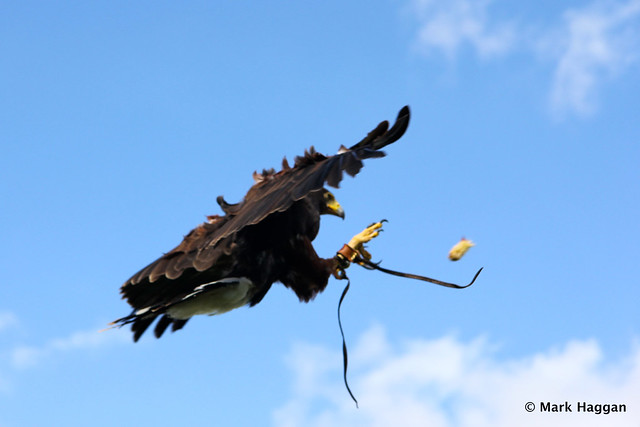 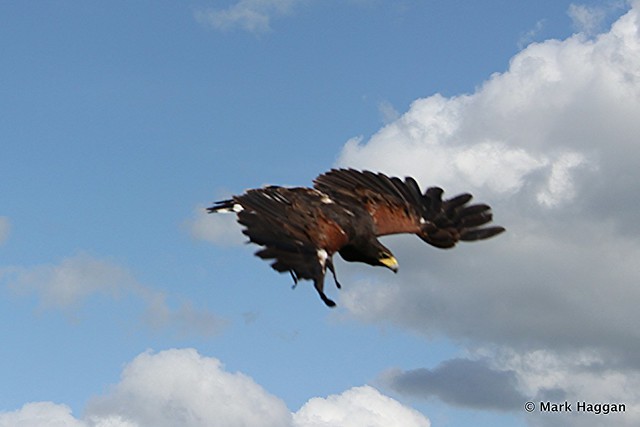 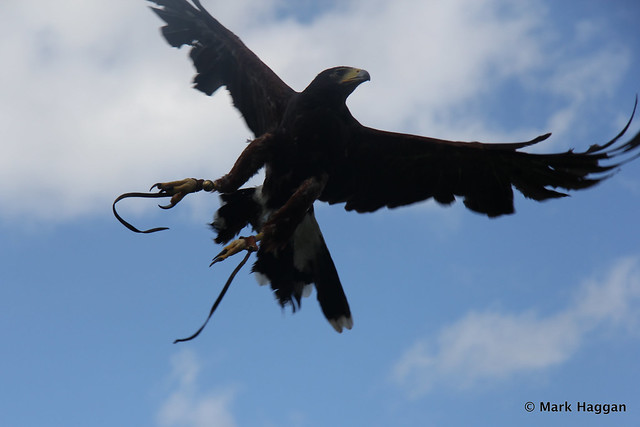 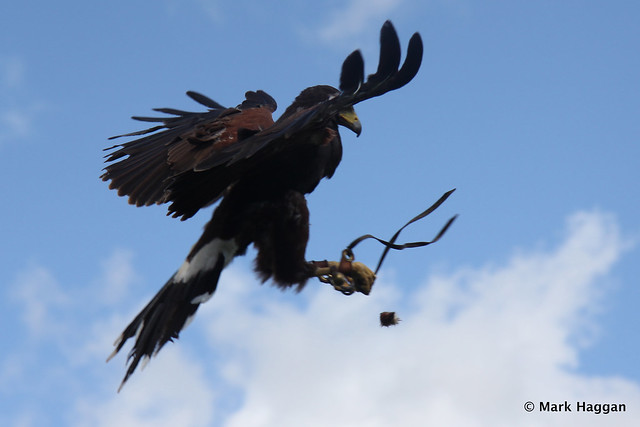 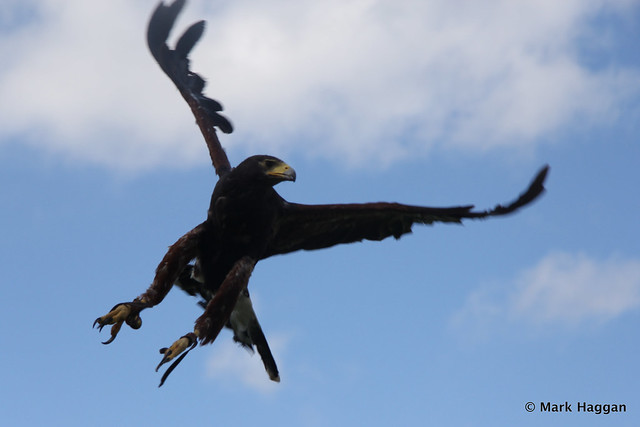 We also flew a series of other birds of various sizes. 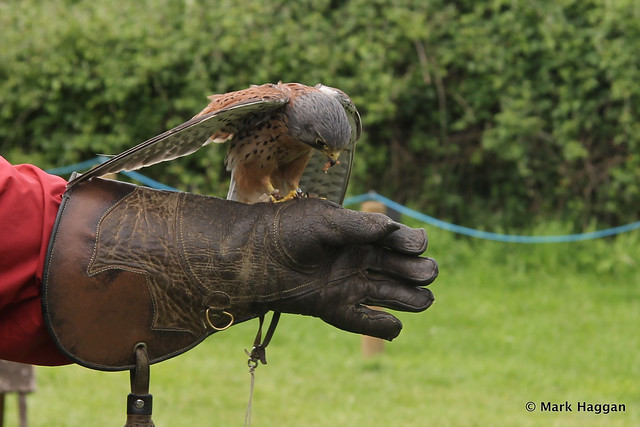 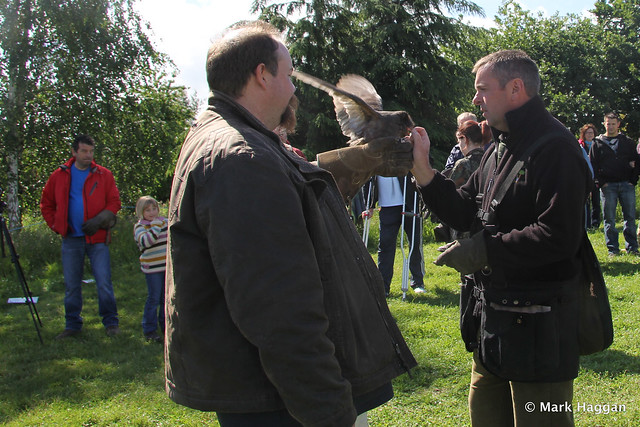 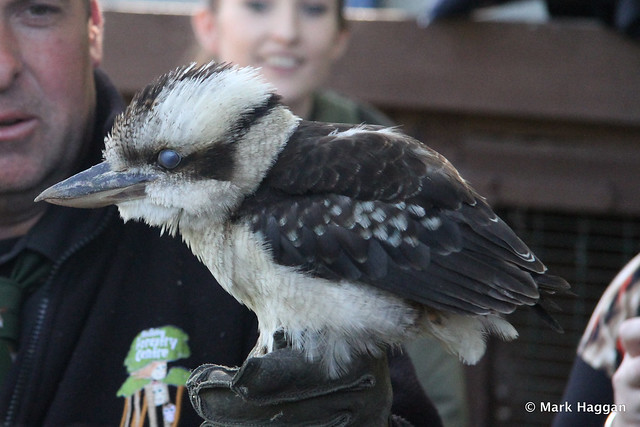 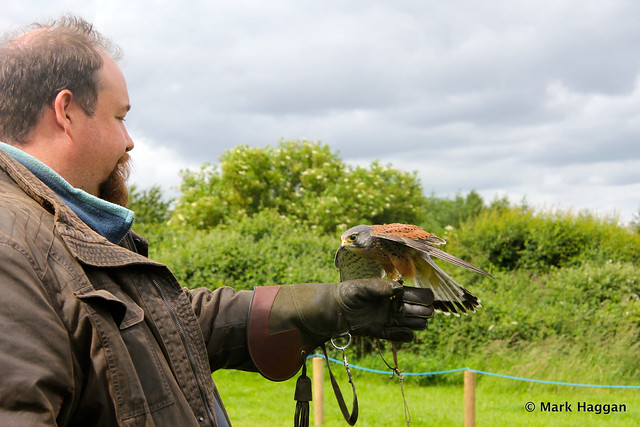 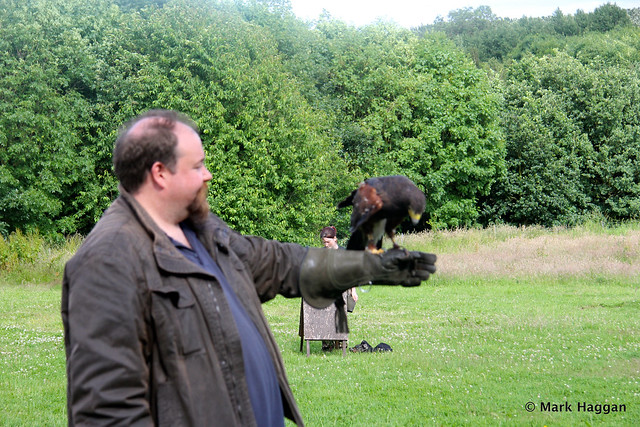 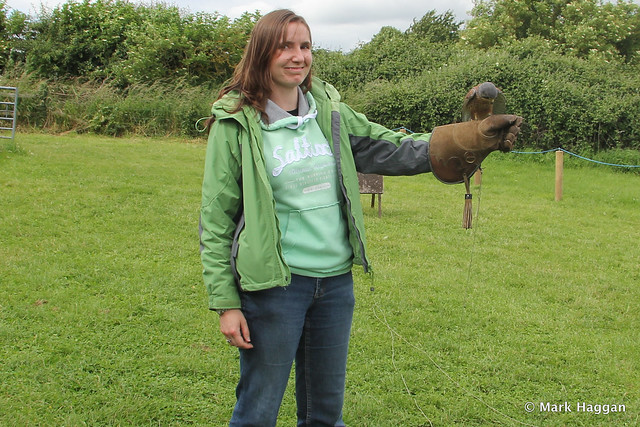 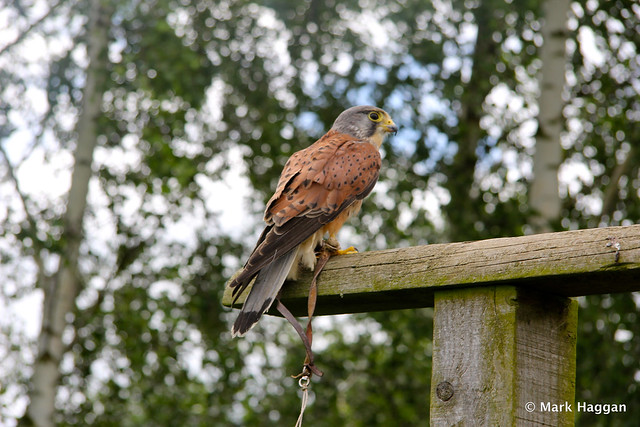 The largest of these was a golden eagle. Seeing the golden eagle on Caz’s arm gave an idea of just how huge this creature is. I remember seeing a question on Twitter when someone asked if a bird could take a domestic cat. They had heard this as a rumour, but did not believe that any of the native species of the UK could do this. This particular golden eagle had previously taken a deer, so a dog or a cat could certainly become a meal for a bird like this. 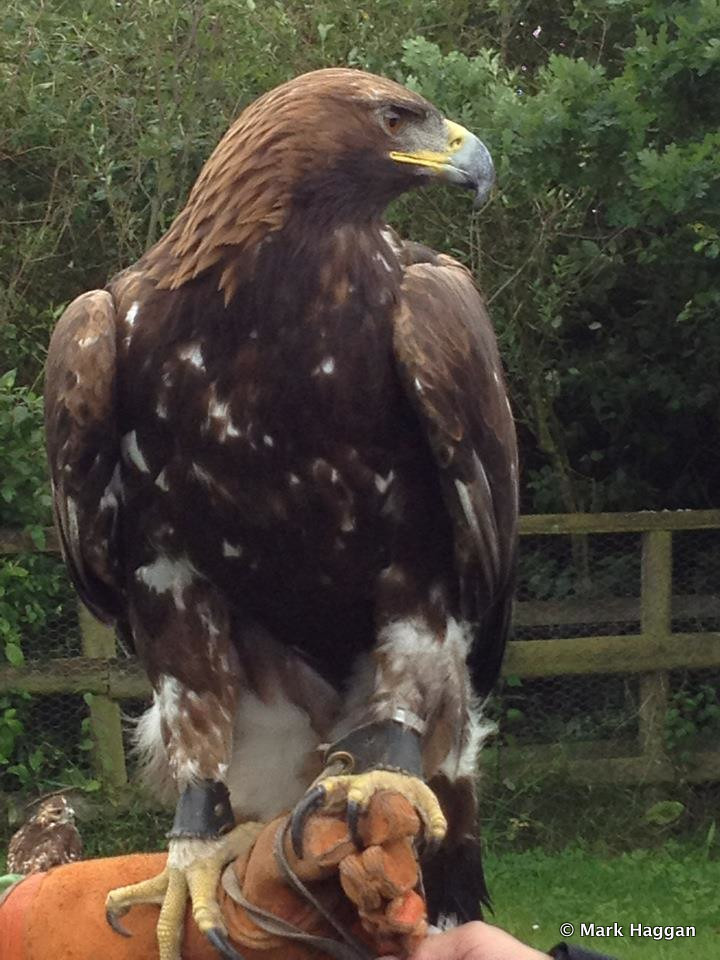 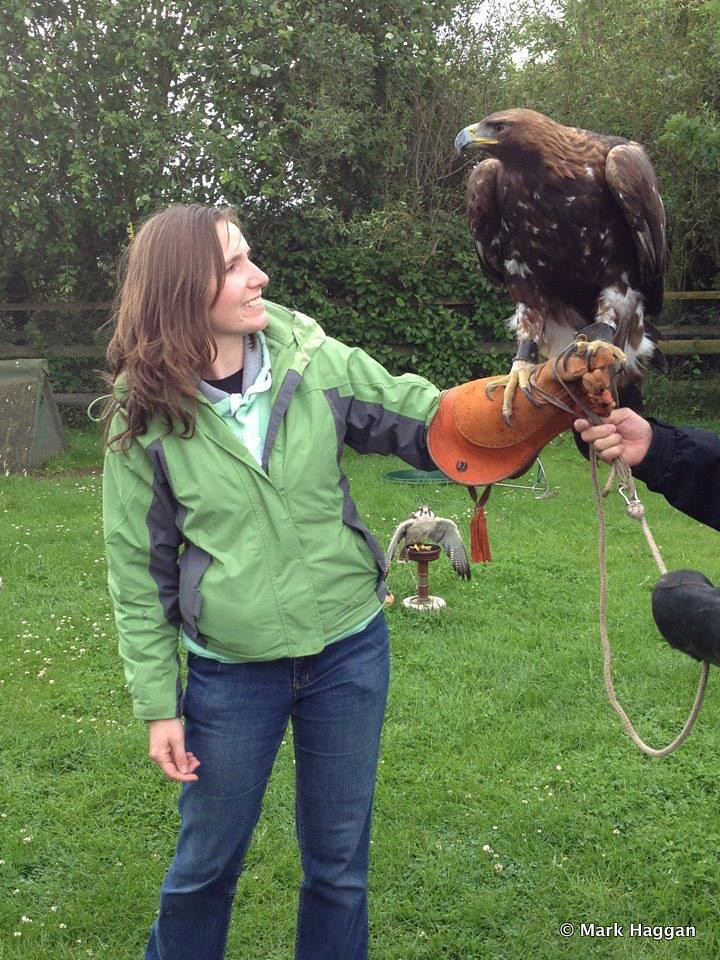 Although the eagle has the ability to be a ferocious and capable hunter, it is also a remarkably beautiful animal. Seeing it perched on an arm is quite incredible, and seeing it in flight is a stunning sight.
Our local falconry centre has a series of other interesting birds, including a large number of owls. Sadly, owls became common pets after the popularity of the Harry Potter books and films, and many of these quickly ended up being abandoned, and many have ended up in centres like this. 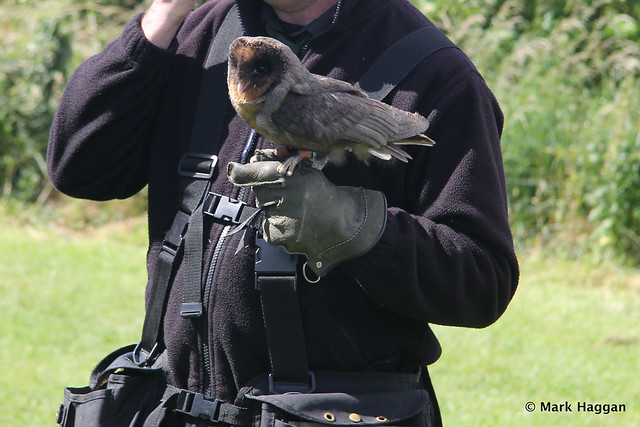 Whilst these are beautiful and powerful creatures, they do take expert care and attention to look after, and are not something that should be bought on a whim. It is surprising how many of these types of birds that can be acquired without specialist licences or permissions. If you do have a desire to see these birds in action, or even think that you may want to take up falconry, do what we did. Find your local falconry centre and pay it a visit. In my experience you will find people who are helpful and enthusiastic about the topic, and may well have a programme to get you involved. Do give it a go, you may well be surprised by just how much you enjoy it