For many years, I thought that Las Vegas was not somewhere that I would enjoy visiting, that it might be a bit tacky and plastic and not really for me. I had the opportunity to visit for the first time a few years ago, as some friends were heading there, and I agreed to go along. I have to admit, I did actually enjoy my trip very much, and had great fun in Vegas. They do say “what happens in Vegas stays in Vegas”, so rather than writing about that, I will tell you about a trip from Vegas that I made, to have breakfast in the Grand Canyon.

The Grand Canyon is one of those wonderful natural phenomena that its grandeur and beauty in its own right is made famous by the media attention that it attracts, on film and television. The opportunity to have breakfast in the Grand Canyon is provided by the large number of helicopters in the region that have tours. I should mention too that there is an environmental impact of helicopters in the area, that is not just about fuel emission, but also how the noise generated impact the indigenous wildlife. The National Park Service has been managing that, and has published a draft environmental impact statement.

There are public tours to the canyon, but as there were four of us wanting to go, we were able to charter our own helicopter to include breakfast in the grand canyon.

We were picked up at our hotel, and taken to an airfield just outside Vegas, and quickly spotted our very patriotically coloured aircraft waiting to whisk us off. 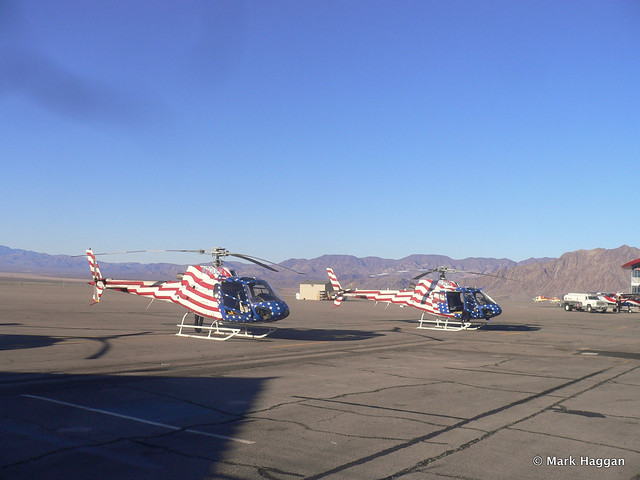 I got in the helicopter and took my seat, ready to depart. 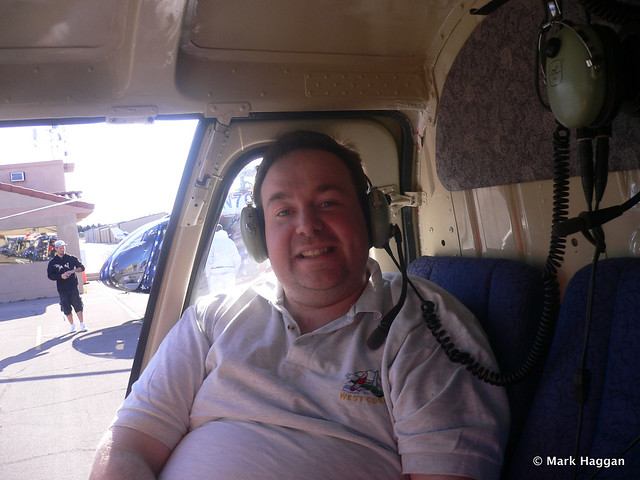 As we took off, we could see that our airfield was used mainly by small aircraft both rotary and fixed wing, no doubt for these sorts of flights and for local flying. 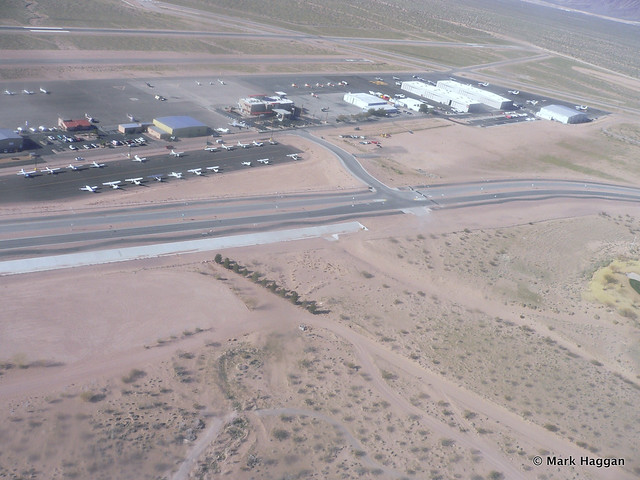 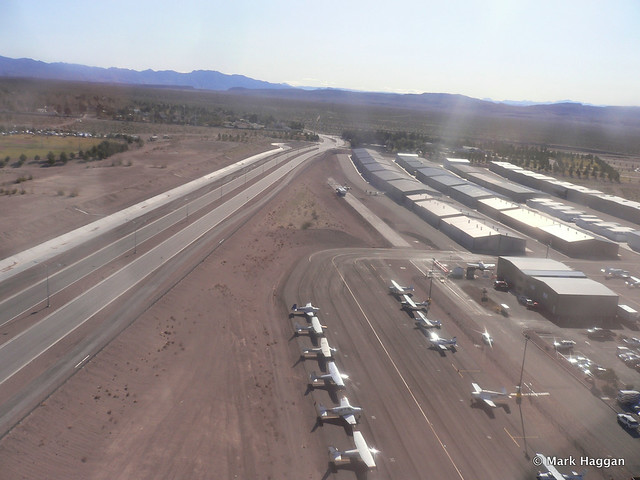 We headed off, and of course had a wonderful view from the helicopter. 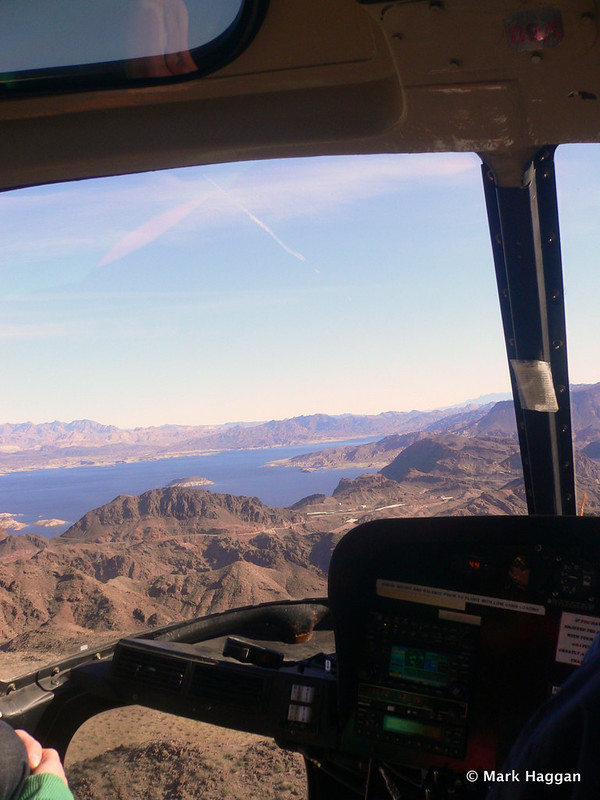 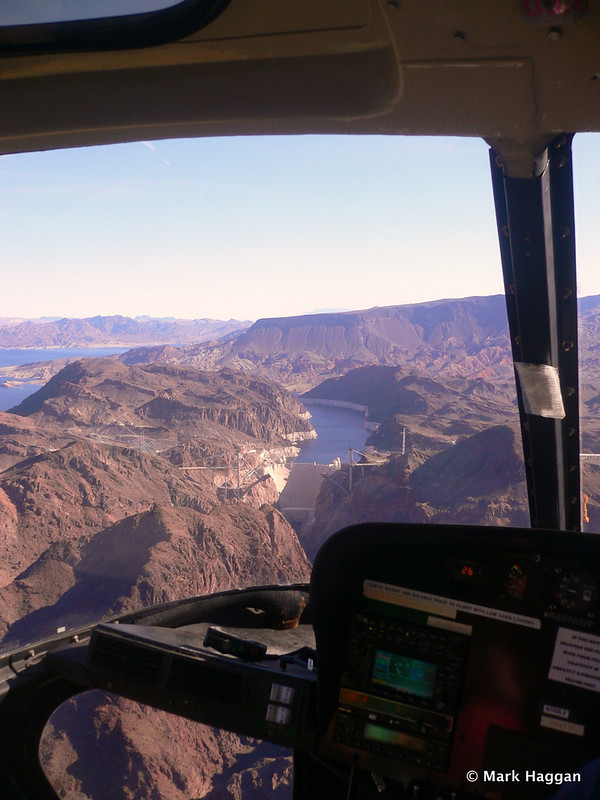 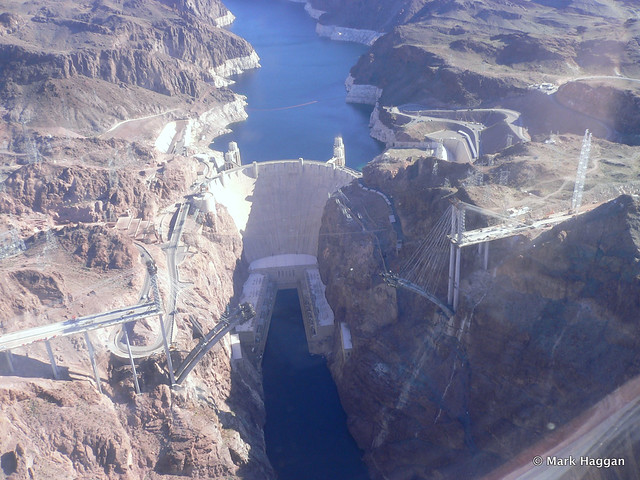 This edifice, formerly known as the Boulder Dam, was built through the Great Depression of the 1930s, and provides a dam at the Black Canyon on the river Colorado, producing hydroelectric power. More than one hundred lives were lost in the building of the dam.

The dam marks the border between Nevada and Arizona, so we were getting closer to the canyon.
We followed along the Colorado river, which has carved out the Grand Canyon over the years. If you have not visited, then to give you an idea of the scale of the canyon, it is 277 miles long, up to 18 miles wide, and over a mile deep in places. 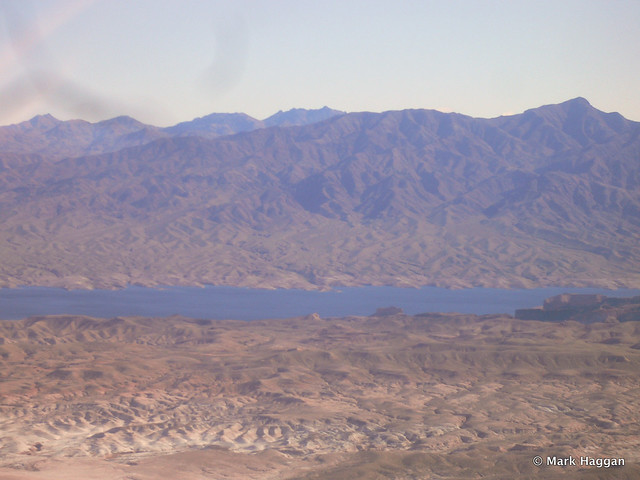 The landscape started to look more like that for which the canyon is famous, and we soon found ourselves at the mouth of the canyon. 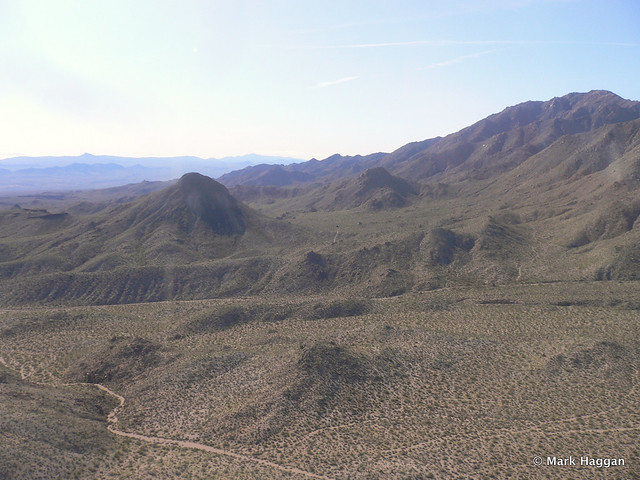 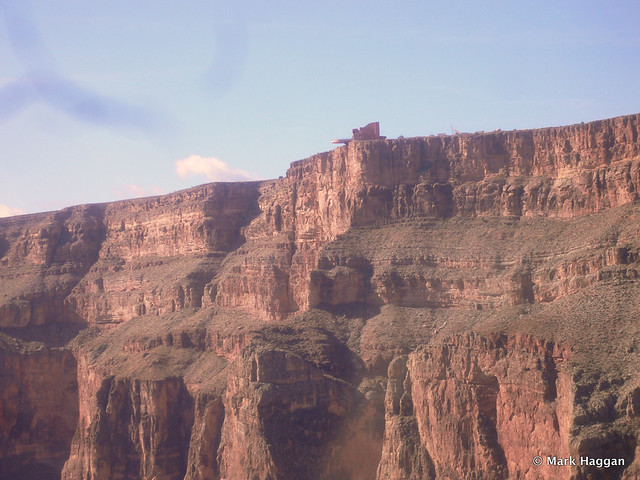 The drop into the canyon was quite spectacular, flying close to the walls as we out down on the ground. Once on the ground, we went for an explore. 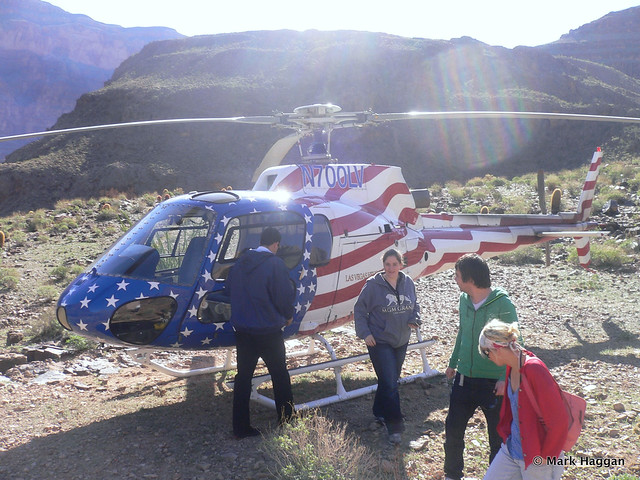 Our pilot then took a box from the back of the helicopter, which contained our food and drink. After all, we had come for breakfast in the Grand Canyon. 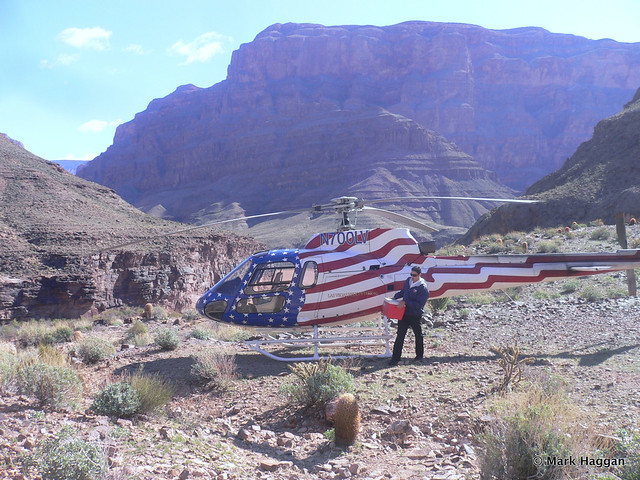 We had some breakfast which, rather decadently, included a bottle of champagne. Well, we had come from Vegas.

Then, we spent some time taking in the wonder of this magnificent work of nature. 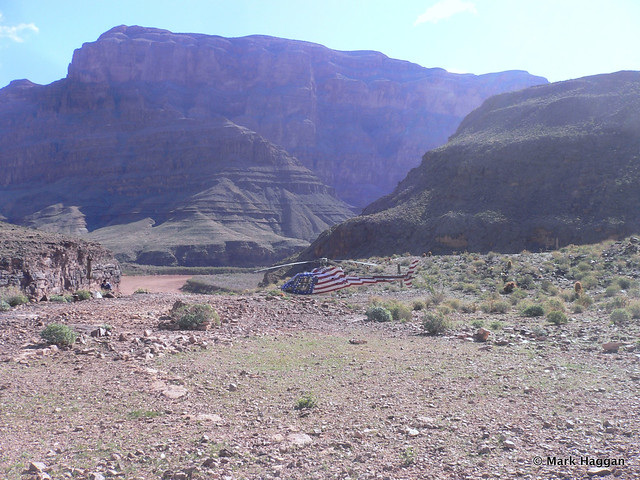 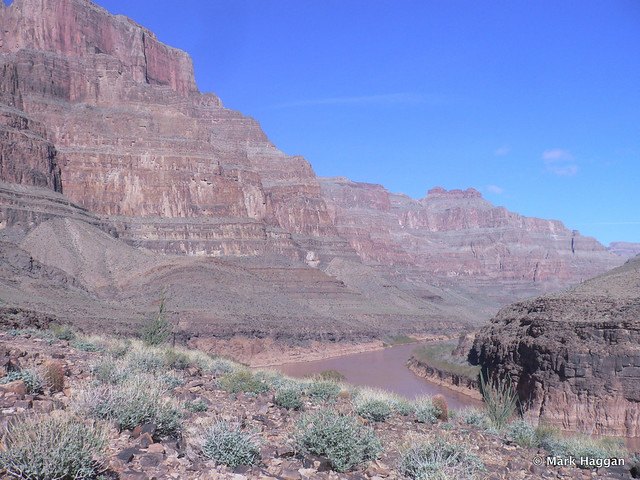 We had an obligatory group photo, taken by the pilot, and of course, a picture with the pilot. He’s the one who looks like a helicopter pilot. 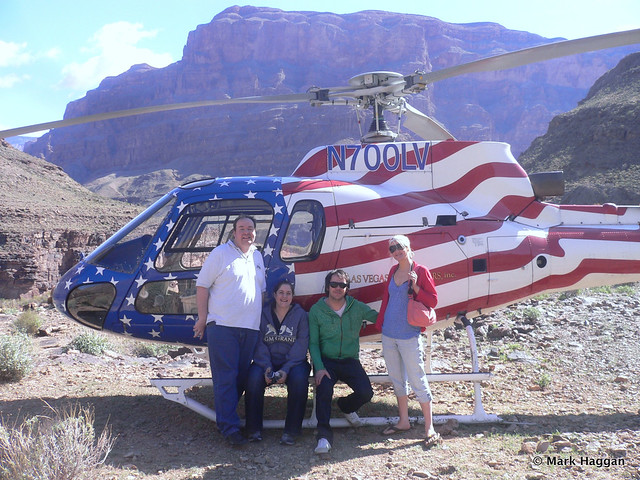 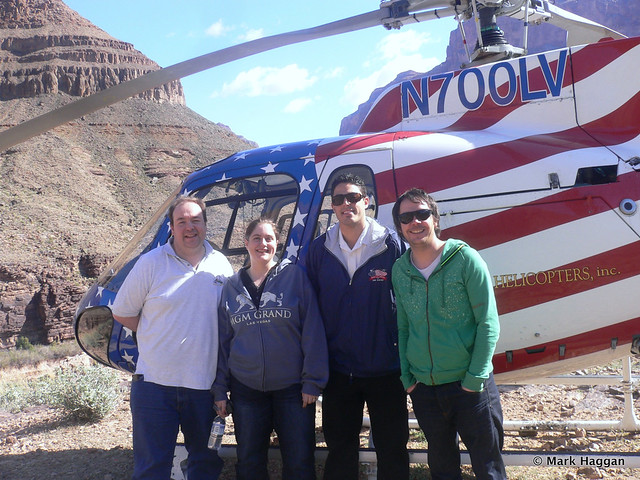 We took off again, and followed the river down the canyon and back towards the airfield from whence we had come. 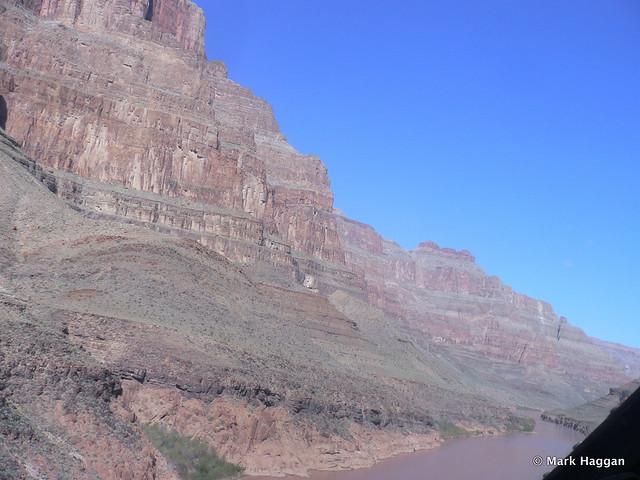 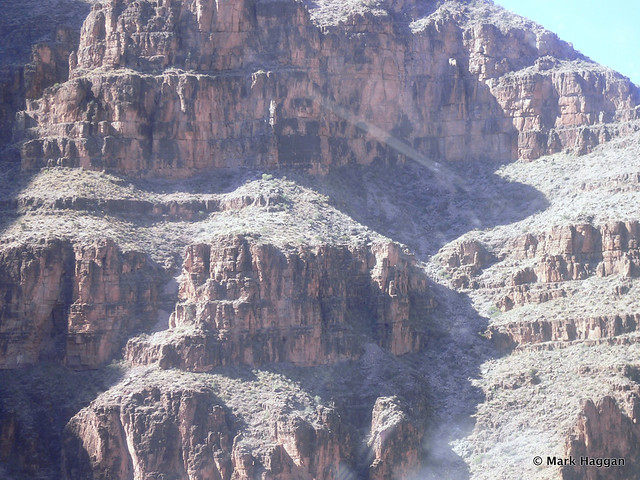 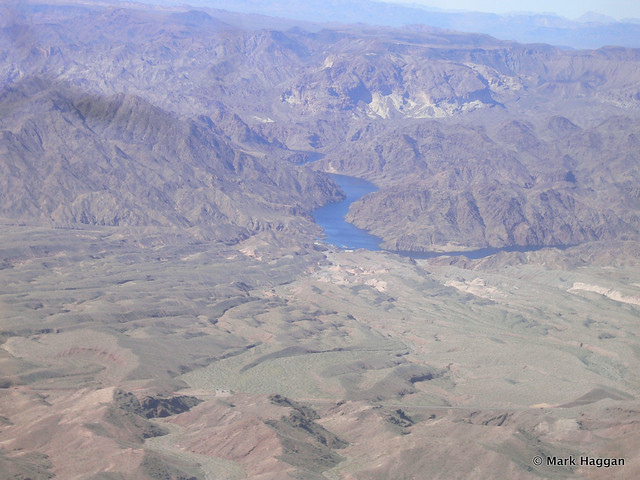 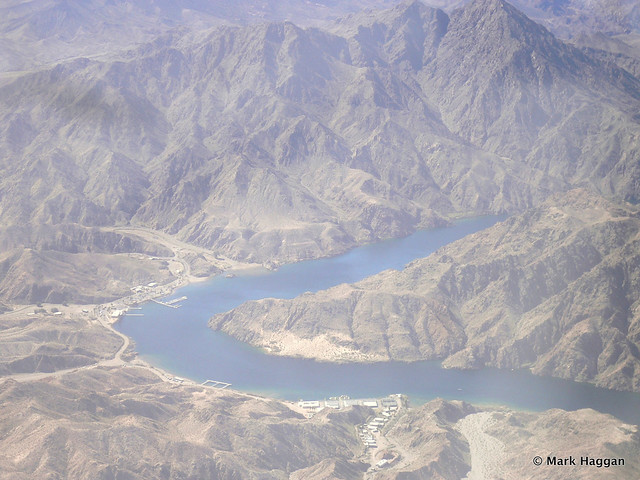 Soon, we were back at the airfield and ready to head back to Vegas. 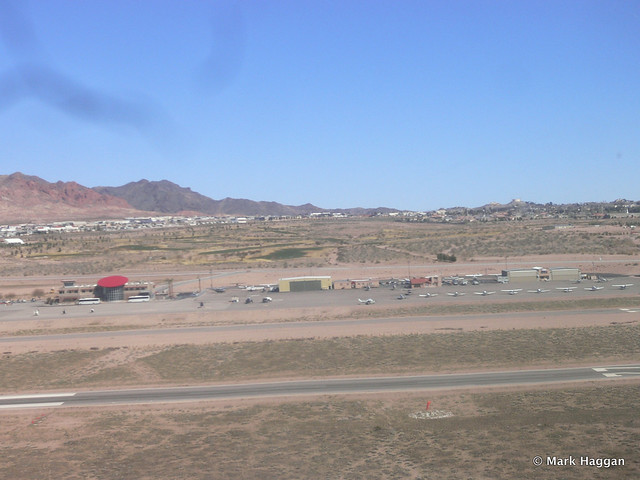 It was a spectacular way to spend the morning, and going by helicopter allowed us to do this in half a day. Most people travelling to Vegas are, like we were, only there for a few days, and if you are like me and do not get a kick from gambling, then this is a great way to spend your time in, or at least near, Las Vegas.