You may be aware that, as well as travelling and motor racing, I do like animals and spending time with them. It may be that I spend more time with my hound Berta than I should, and that she is an important part of our family. I have also been off to visit all sorts of other animals and spending time with them, and among the more interesting creatures that I have been lucky enough to spend time with are reindeer. Those in the UK may be surprised to learn that there is a reindeer herd in the UK that you can spend time with, and a couple of years ago, that’s exactly what I did.

The Cairngorm herd is, as you might expect, located in the highlands of Scotland, near Aviemore. If you find yourself in that ski resort, then it’s only a couple of minutes’ drive around to the reindeer centre.

As you get there, if you are enjoying the Scottish summer, then you will more than likely be greeted by some younger members of the herd in their pens. 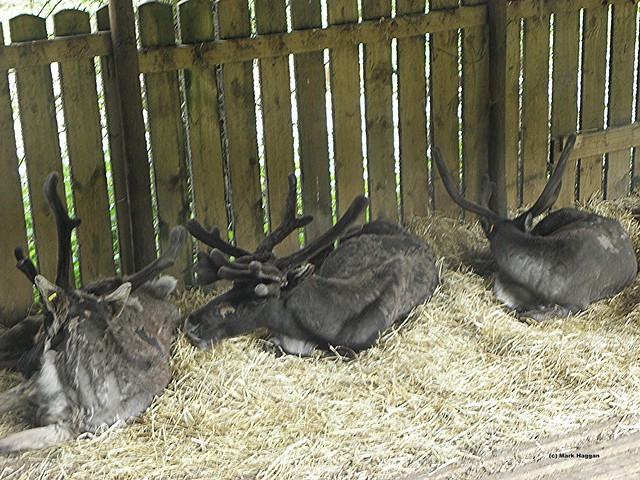 Once we left the pens, we headed up the hill to where the reindeer themselves are to be found.
It’s fair to say it is quite a pleasant view on the quick journey to the reindeer herd, with views like this en route. 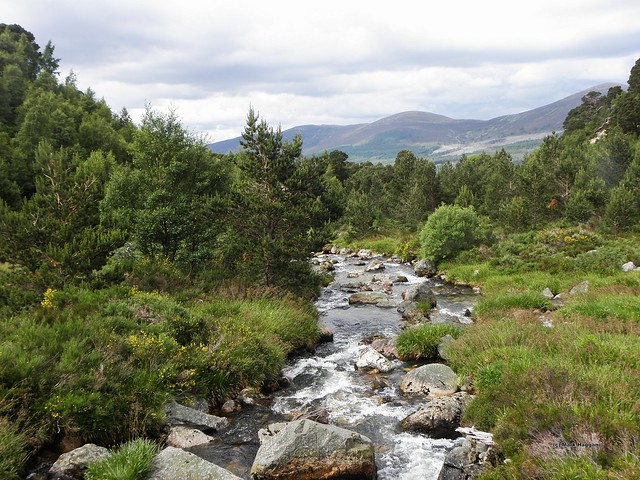 I was carrying a sack of feed with me for the herd, in an attempt to make myself popular with them. 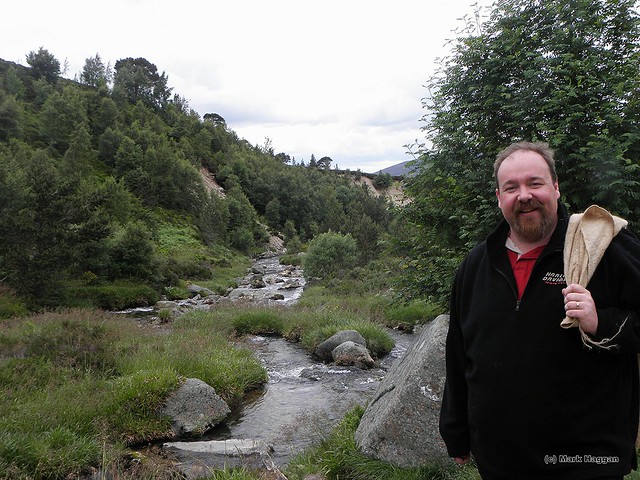 However, when I got there, I did look a little like an off duty Santa, complete with sack, beard, reindeer and belly. 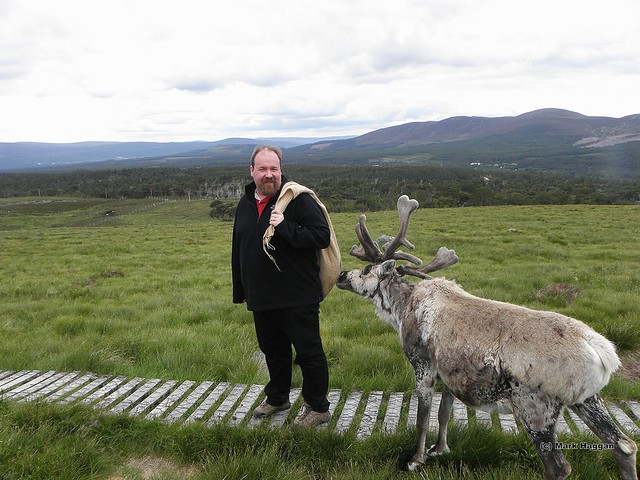 My wife was initially impressed that the reindeer came straight to me and happily trotted around with me, then realised that the bag of feed may actually have been what was popular rather than me…
I helped to feed some of the chaps in the herd, and as quickly as I became comfortable with these beautiful animals, they seemed to become equally comfortable with me. 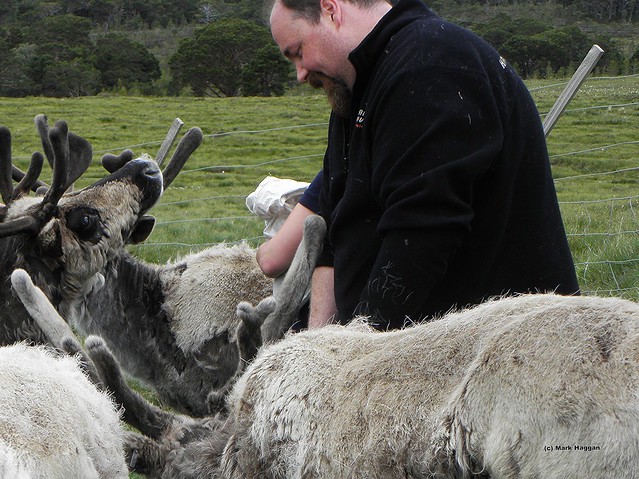 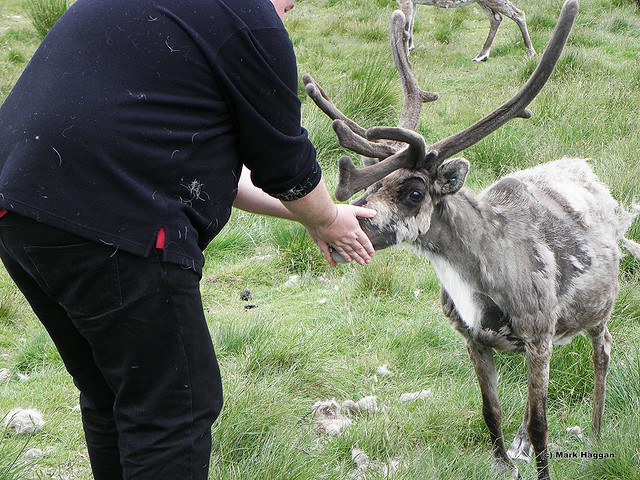 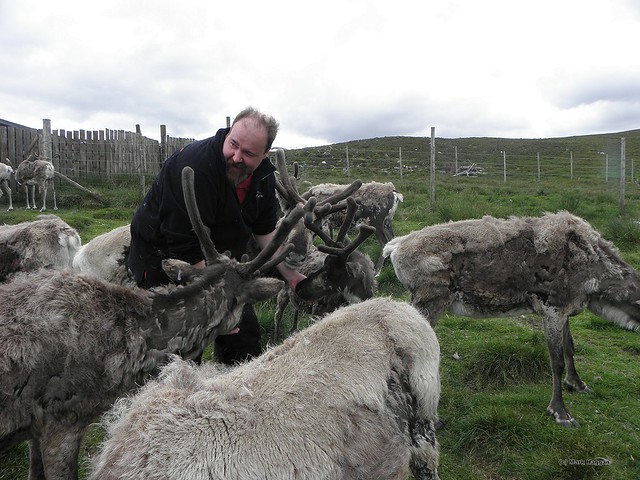 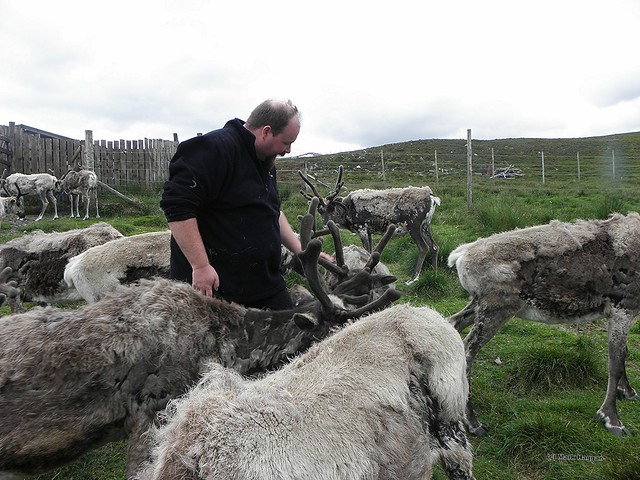 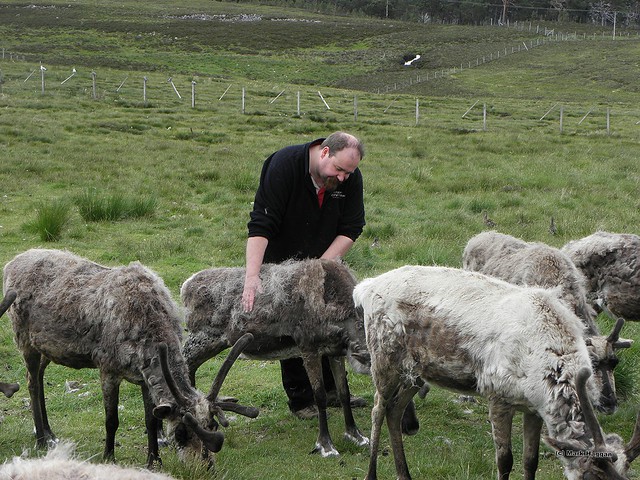 As you can tell from the pictures, the reindeer were moulting, it being early July in these pictures, and I spent time with the herd, I seemed to soon have more reindeer fur on me than there seemed to be on some of them. 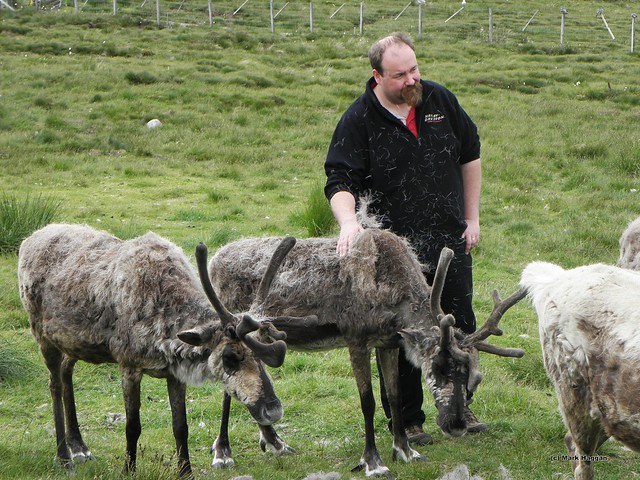 Reindeer are fascinating creatures. They were among the first creatures to be domesticated and to live with humans, and the reindeer herders of the arctic have spent centuries living with them. They are a little like the sort of vegetarians who enjoy the occasional bacon sandwich, in that they are ostensibly herbivores, but have been known to eat eggs and even small animals when the opportunity has arose. The reindeer of the Santa story are most likely female, as one of the interesting things about the life of reindeer is that after the calves are born, the males lose their antlers and the females retain theirs through the winter. Reindeer antlers are a little like human fingerprints in that each creature has a unique set. As a new set of antlers grow, they follow the same pattern as the previous year, but with new nodes. Some of this herd were happy to show me their antlers up close. 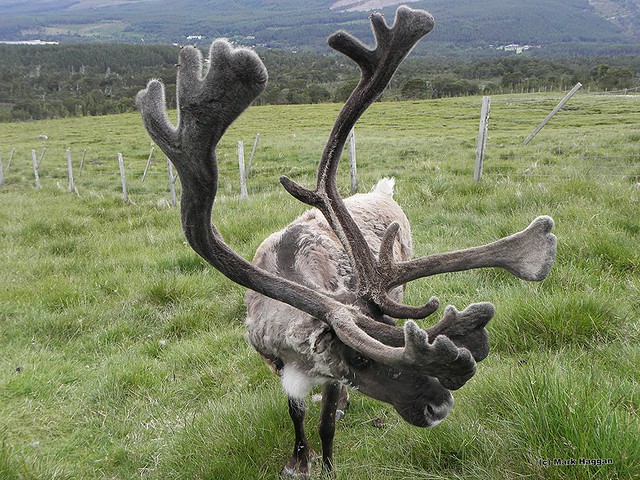 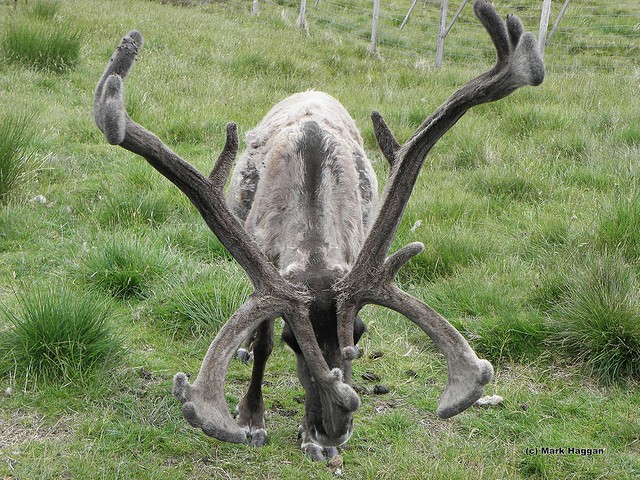 Reindeer also have an interesting approach to body clocks. Living in the arctic, they are not governed by an environment of night and day being a regular 24 hour cycle, and do not need to follow a normal day. They eat when they can, and can move huge distances, with North American caribou moving sometimes up to 5000km per year. Given that, they also sleep when they need to, and after a spot of lunch with us, it was time for a nap for some of the herd. 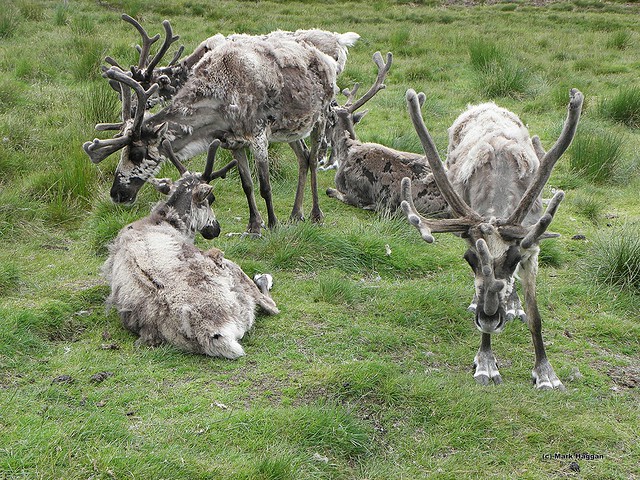 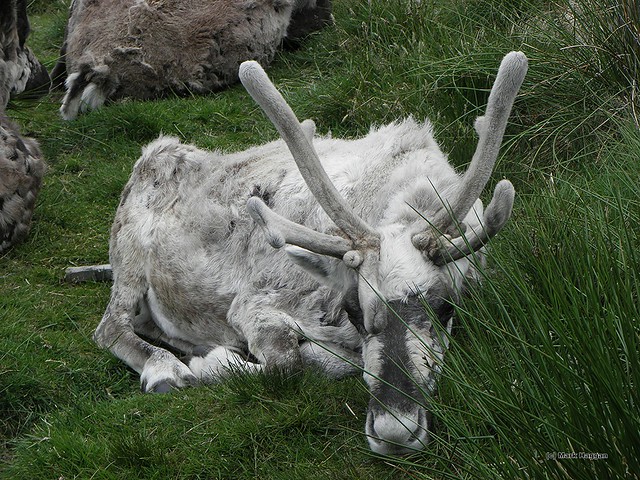 I did my best to join in, having a chat with them as they dozed off. 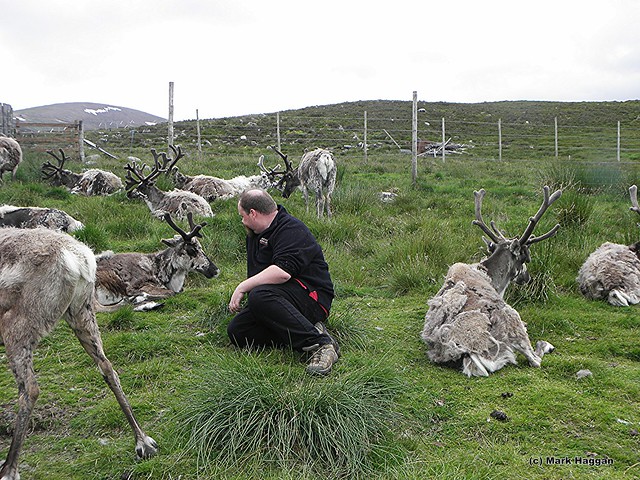 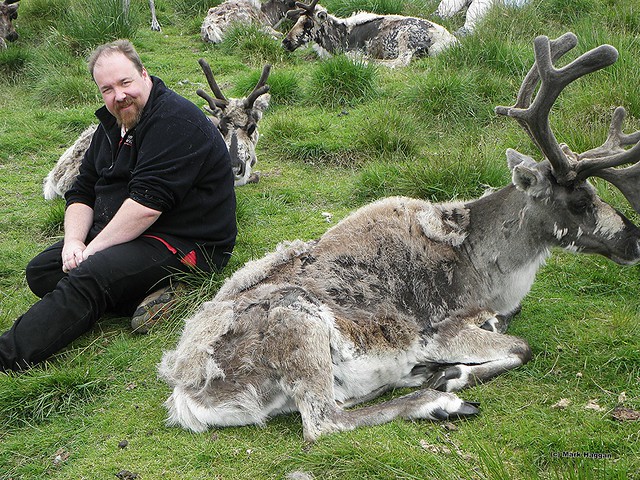 They are beautiful creatures, and spending time with them is a remarkably calming and relaxing way to spend some time. 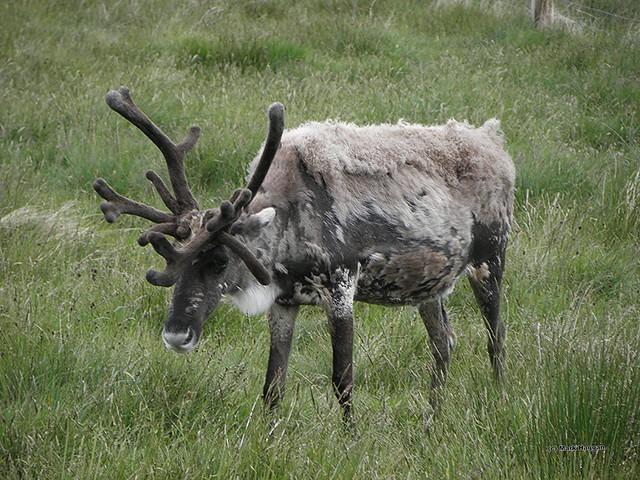 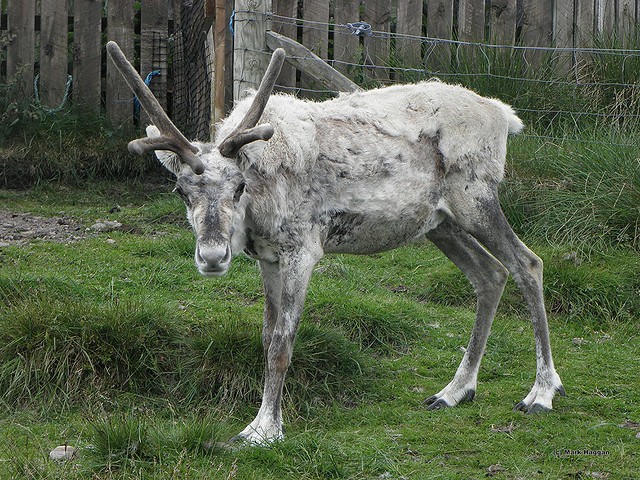 The Cairngorm herd celebrated its 60th birthday last year, having been introduced to the area in 1952. You may have seen some of them either at local events or on television, as the herd do get about during the parts of the year when they are not roaming wild across the Cairngorm mountains. They are herd animals, and need to live as part of a herd, which is sadly not true of all the reindeer that live in the UK, so it is worth checking when you see reindeer at Christmas events that they are properly looked after through the rest of the year.

If you are in Scotland, and near Aviemore, do go to see the reindeer. You won’t regret it. There are few things that I have done that I have enjoyed quite so much as spending time with these beautiful animals. 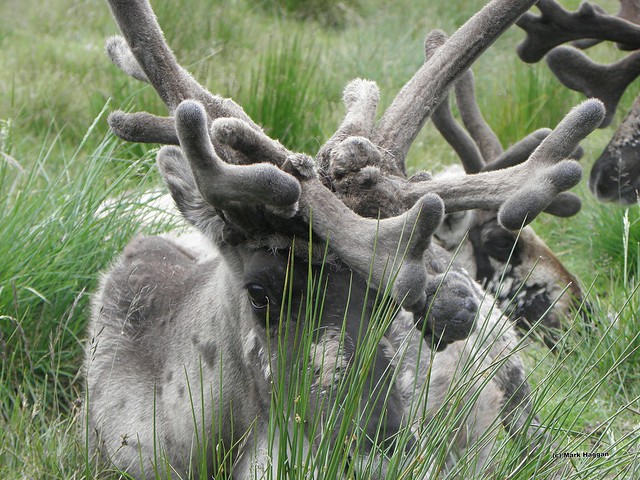