The city of Sydney is surrounded by beautiful beaches, some of which are more famous than others.  Among the most famous for those outside Australia is Bondi Beach.  The name conjures up images of surfers and golden sands, and there is some truth in that image.  The name itself apparently comes from an aboriginal word meaning “water breaking over rocks”, or “the noise of water breaking over rocks”, which helps explain the keenness of surfers to frequent the beach.
The beach became public in June 1882, and has been popular ever since.  The area has been one of waves of immigration, with New Zealanders settling the local area in the early 20th century, and after World War II, migrants arrived from central and eastern Europe.  More recent arrivals are from Asia and the Pacific island nations.
The beach has played an important part in the development of what counts as acceptable beach attire. The 1907 Sydney bathing costume protests were focused on Bondi.  In 1951, the US actress Jean Parker was one of those who had their bikini measured by Abe Laidlaw, who was responsible for enforcing the decenct laws, and was tasked with checking the dimensions of swimwear.  Parker’s outfit did not meet the requirements, ,and was escorted from the beach. 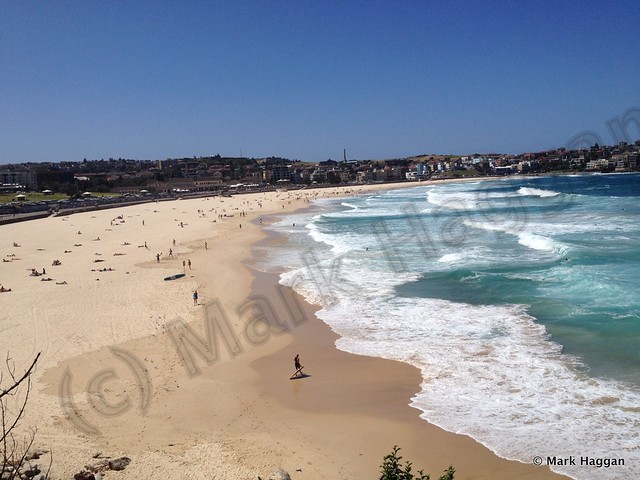 The beach itself is a curved bay, and the Friday lunchtime when we visited saw a relatively quiet beach that we could walk across without it being so packed that you would have to check where you could place your feet.  The sand is about 1km long in an arc, with a car park and a road separating it from the row of shops, cafés and restaurants that sit behind it.  Imagine the row of shops that you might find in a British seaside resort, although some of those at Bondi may be a little more trendy, and intersperse them with surfboard shops and related clothing and accessory shops. 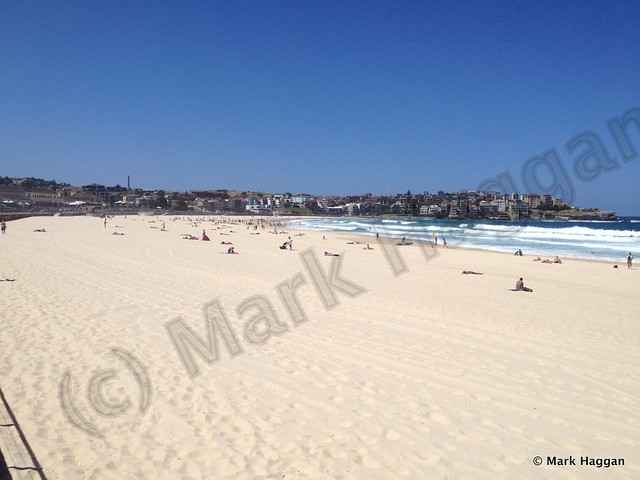 We had a pleasant lunch at the beach, before taking a stroll across and to the pool at one end. We looked across the beach and watched the surfers practicing.  It was one of a number of beaches that we visited whilst in the area, and Xander seemed to quite enjoy looking out to sea.  Definitely one of those “must visit” places when in Sydney. 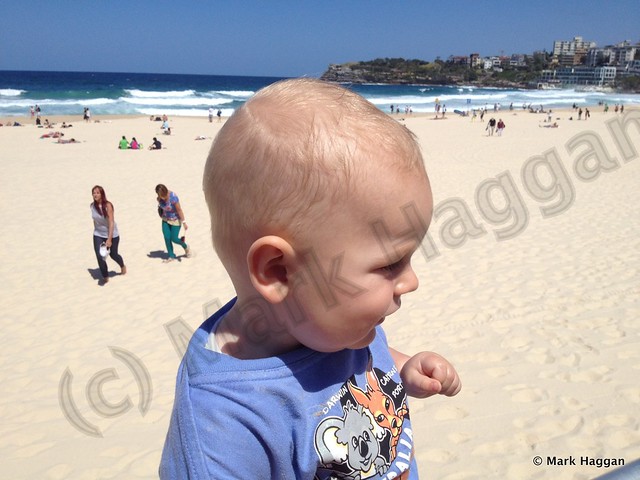