I wrote recently about the various forms of food that there are, and how some creatures that may be a delicacy in one place, are much less so in another. Deep fried tarantula, anyone?

Of course, there is another interesting thing about global cuisine.  Sometimes, food that is consumed in one way in one place may be eaten differently in other parts of the world. As a child, and through until my early teens, rice would have only been a pudding for me. The first savoury rices that I saw were a boil in the bag curry & rice from a supermarket, and Bachelor’s Savoury Rice. Equally, olive oil would only have been used for medical purposes – poured warm into your ear – and would have never been drizzled over a salad. Not that salads were particularly popular in my youth.

This week, I found another example. I was in Hanover, and when I went for lunch, I looked in the fridge to see what drinks were available. There were the ubiquitous global brands, water, fruit juices, and a few local options. The chap I was with picked up a bottle with a picture of rhubarb on it. I asked him what is was. It was, of course, a fizzy rhubarb drink. He spotted my surprise at fizzy rhubarb pop. He was surprised at my surprise. “What else would you do with it?”, he asked. I explained rhubarb crumble. “Like a pie?”, he asked looking surprised. I said yes. Apparently it is normal in Germany to bake it in a cake, or to make compote with it, but not pie or crumble. 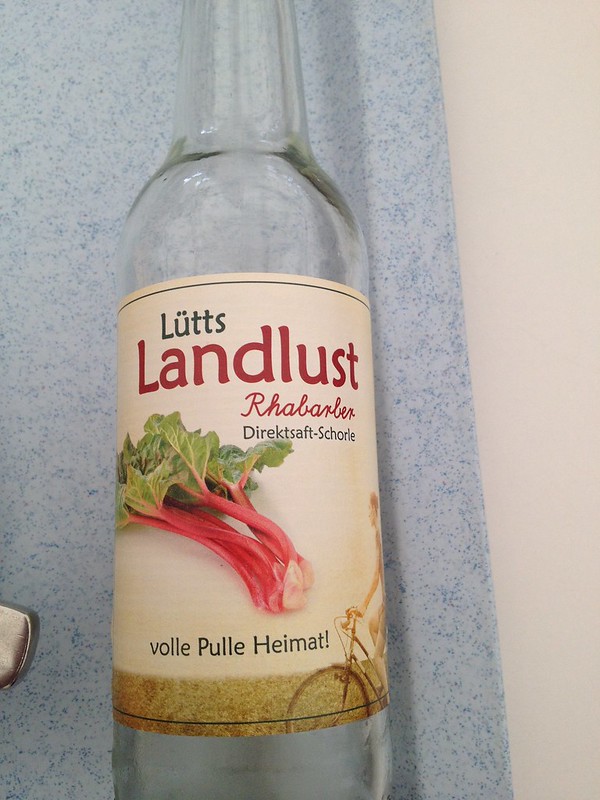 However, in a week where we learned that our beef may actually be more from horses, let alone he nationality of the horse, I wouldn’t be surprised if there was rhubarb out there claiming to be from Yorkshire but the closest it’s been is watching an episode of Last of the Summer Wine. If there are rhubarb smugglers out there passing off their rhubarb as being from Yorkshire, then they should catch them and throw the book at them. Lock them in The Tower. You know, the one guarded by the HorseEaters….