Much as I would love to spend every Grand Prix watching from the side of the track, sadly for me, like most of us, that is not normally the case, and the majority of my Grand Prix watching takes place from the comfort and relative privacy of my house.  Comfort, as I can watch in the warm and dry from the sofa – unlike too many of my Silverstone experiences – and privacy, as I can jump up and down and scream at the television without disturbing anyone, other than maybe attracting curious looks from Berta.

Some middle ground, however, is to watch a race as part of an organised event, and share the experience with other fans, whilst having a large screen or equivalent on which to view the action.  One rather excellent location for this is the Williams Factory in Oxfordshire.  I have been there a few times, not just to watch Grands Prix, but also to attend other corporate events.  I thought that I would tell you about my experiences watching the 2009 Abu Dhabi Grand Prix.   A key reason to go to watch that particular race courtesy of Williams was that I had arranged to take my brother Samuel, and his wife as an early Christmas present.  It was he who first got me interested in Formula One, and I suspect he considers it rather amusing that his brother has not only got interested in his sport, but seems to spend an inordinate amount of time watching motor racing these days.

Samuel and I are of the age where it is hard to say the word “Williams” without preceding it with “Canon” and following it up with “Renault”, and where the FW14b was a particularly special car. As a huge fan of Nigel Mansell, certainly the UK’s greatest Formula One driver of the last quarter century is his mind, the Williams factory and museum seemed to be a great place to watch a race.

Our first experience with racing that day started before we even got to Oxfordshire.  We left home in horrendous torrential rain that felt reminiscent of many a Silverstone summer, and were amazed when a small car raced by us on the motorway.  We were particularly surprised that the driver of this car had anything like the visibility required to drive at that speed.  A few miles further down the road, our concerns were confirmed when we discovered the same car spinning in circles in the middle of the road, clearly having lost control.  Thankfully, and luckily, the car had managed not to strike any other cars or fences, but it did remind us that driving fast requires a remarkable amount of skill, and certainly should not be done on the public roads. 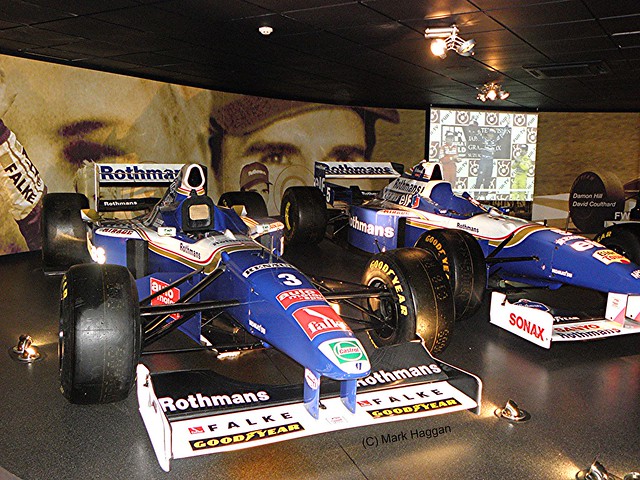 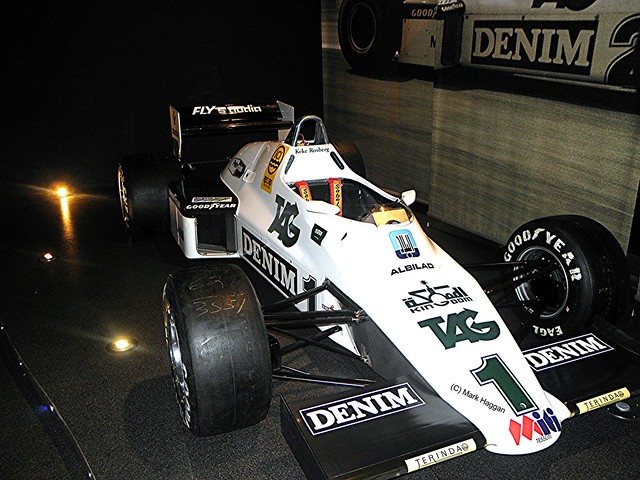 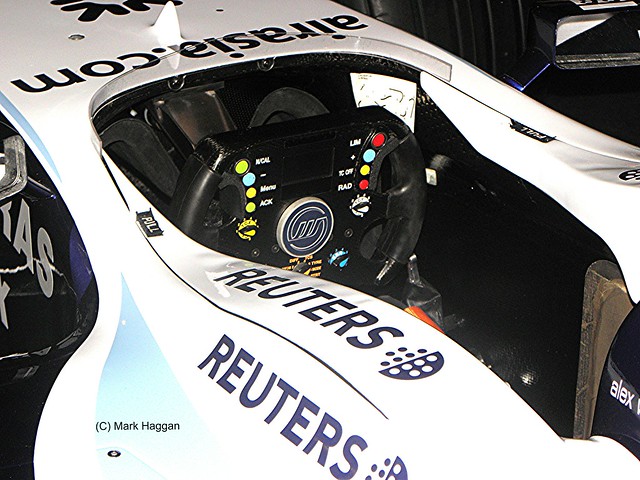 Every time I have visited Williams, the weather has been far from perfect.  The previous time that I had been there, the fog was so thick that it was genuinely difficult to find the building. At least this time we could see the factory, and previous experiences had taught me to give myself enough time to get there safely.  One of the great things about the Williams factory is the rather impressive Williams museum there.  The first sign of a Grand Prix car is the clever piece of topiary out the front of the office, an even better piece of formula one linked hedge than that produced by Lewis Hamilton in Korea in 2012. 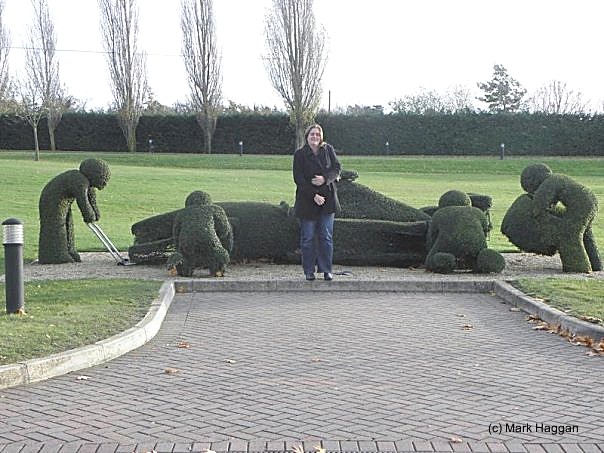 Inside, the last Williams to win the world constructor’s title, Jacque Villenuve’s FW19 from 1997 hangs over reception, reminding visitors of the glory years through the 90s of Williams.  We were met as always by the excellent hospitality team there, and headed into the museum for a tour of the various cars from various years through the history of Williams.  Although there were one or two other cars, like a rally car, the vast majority of cars on view were Formula One.  Williams have a remarkable list of former drivers, including, in addition to those named above, names like Senna, Prost, Rosberg, and Hill, and walking around the well laid out museum was a trip through my Formula One memories. 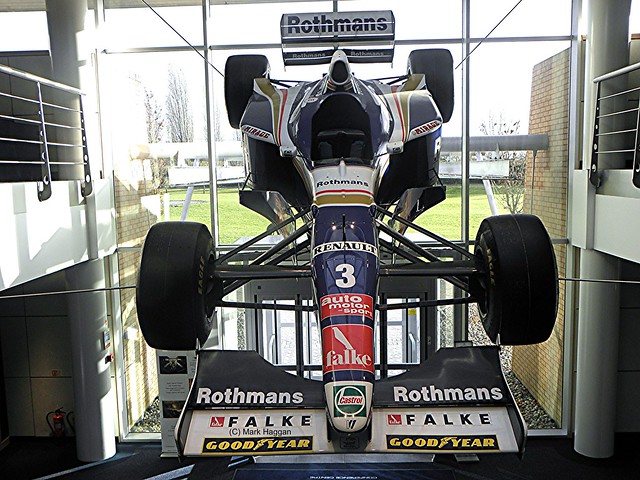 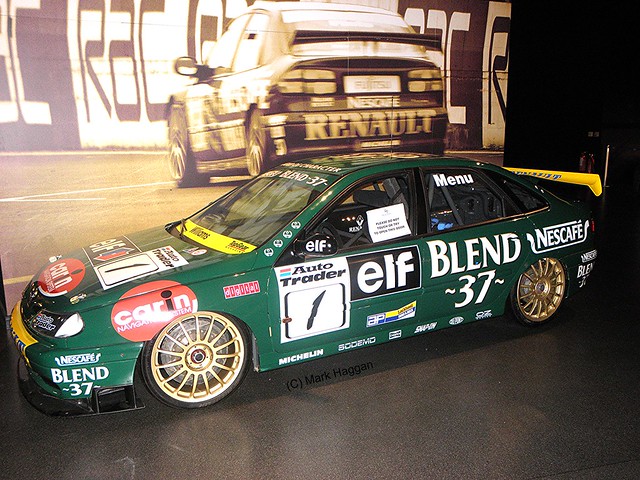 Of course, one of the big attractions for us was Nigel Mansell’s FW14b from Hungary 1992, when he was proclaimed the first British World Drivers’ Champion for sixteen years. Given that we were a group not normally star struck by famous people, we took turns to have a photo taken beside the car like a group of giggling teenagers at a One Direction concert.   The sister car from 1992, as driven by Ricardo Patrese, was also good to see.  Of course, for others, the cars of Aryton Senna, Alain Prost, Nelson Piquet, Damon Hill, Keke Rosberg, Carlos Reutemann, JacqueVillenueve, Juan Pablo Montoya, or Heinz-Harald Frentzen, to name a few of those on display, may illicit the same emotional response as we were showing for Mansell’s Red Five. 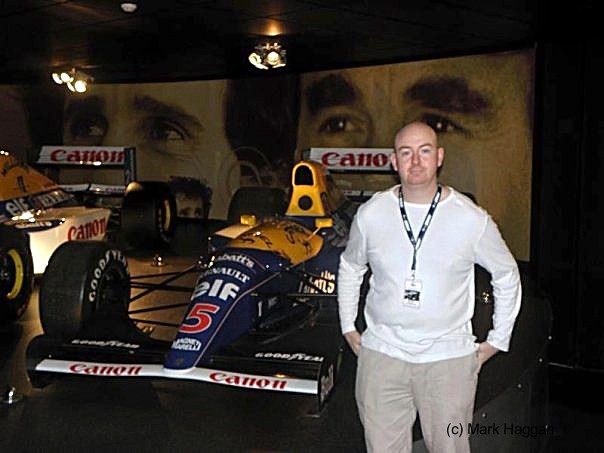 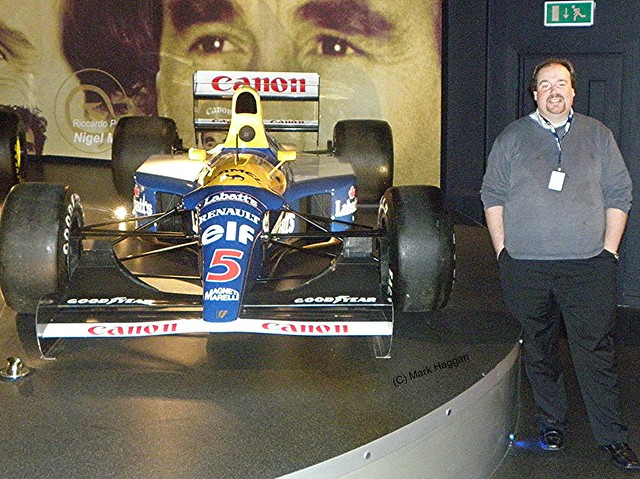 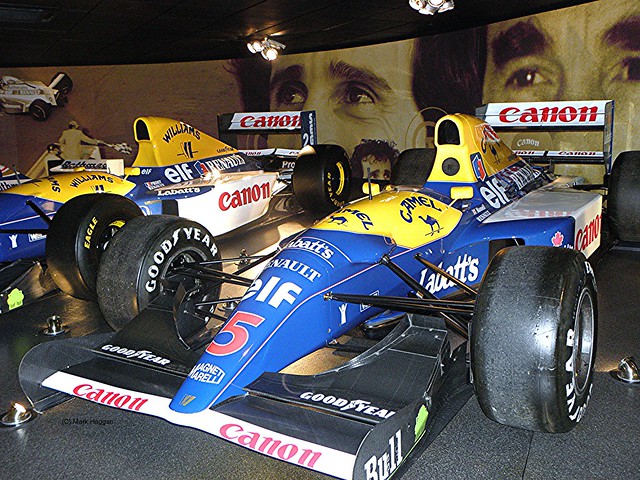 After some time – quite some time – walking through the museum, we went upstairs to the trophy room, which was another wonderful trip through the impressive history of Williams, and home of the two competitions for the day; a prize draw based on the results for the day, and a spin in the simulator, which is built around Jenson Button’s FW22.  At a previous trip there, my good friend Mike Lovegrove was having a go in the simulator, and after one of a number of spins, found his car driving around the circuit in a different direction to the rest of the cars.  “Why are all of the other cars driving in the wrong direction?” asked Mike.  “They’re not”, was the reply.  Mike found himself in the unenviable position of managing to be disqualified from a simulator for dangerous driving. 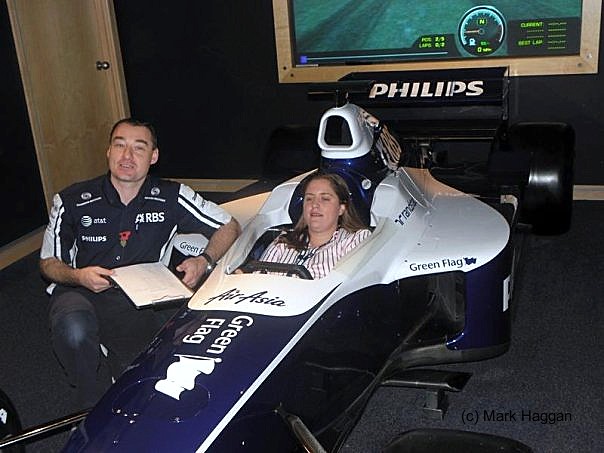 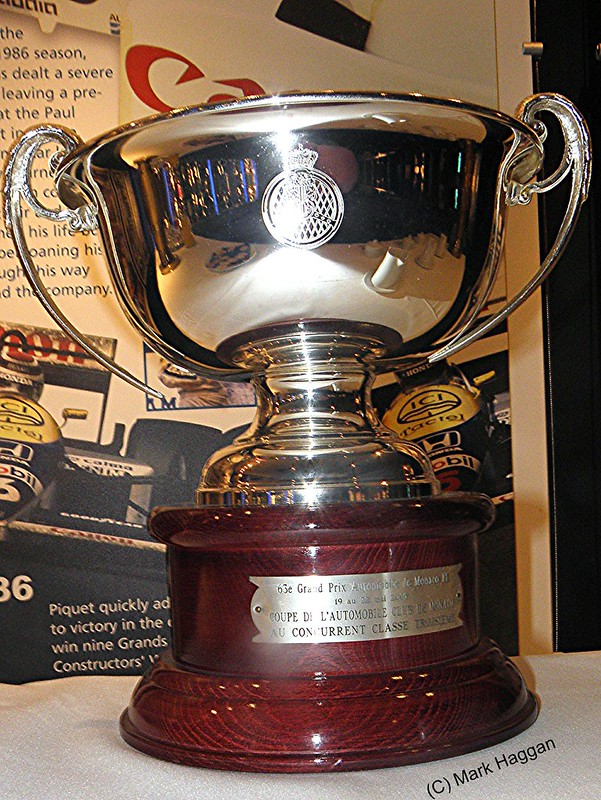 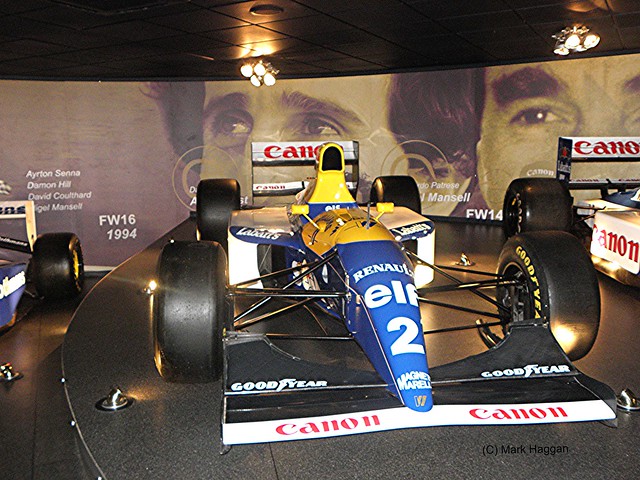 We moved on to have a rather lovely lunch whilst the race build up was taking place, which included seeing some interesting details on a series of big screens, and a live link up with Patrick Head in Abu Dhabi, who told us, among other things, about the exciting new driver who would be announced the next day.  That turned out to be Nico Hulkenberg.  There were a series of large screens with a mix of the view from the race and other technical details being displayed.  The race started, and we watched it whilst continuing to enjoy the hospitality provided.  Sadly the race did not result in a win for Williams, but it was a great spectacle to watch. 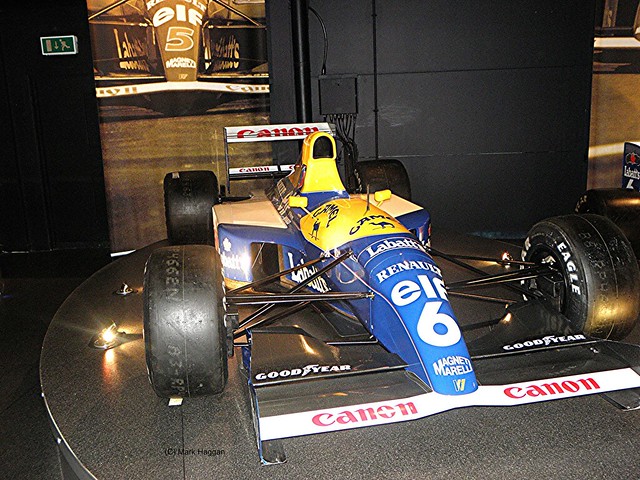 We headed off afterwards, and thankfully the rain had stopped.  However, after commenting on Facebook that I was watching the Abu Dhabi Grand Prix at the Williams Factory, I had a series of messages from friends in the UAE suggesting we should meet up before I headed back home.  I had to explain that I was in Middle England, not the Middle East.

All in all, for those for whom the journey to Oxfordshire is not too onerous, it is an excellent way to watch a Grand Prix – although maybe not quite the same as being at the circuit – and it is a great opportunity to meet one of the Formula One teams.   A definite recommendation.