I do live in quite a rural part of the country, so farm animals are a relatively common sight.  That said, they are normally in, or in transit between, fields.  They certainly do not pop around for dinner on a frequent basis.  Last night, I went out to put some rubbish in the bin, and heard a noise at the end of the drive.  I went to investigate, and found a few faces staring back at me, although not the human faces that you might expect, but our unexpected visitors turned out to be a herd of local cows who seemed somewhat intrigued as to what was going on.  Thankfully, my dog Berta was still inside.  Their owner was trying to herd them home with limited success, so I went to help. 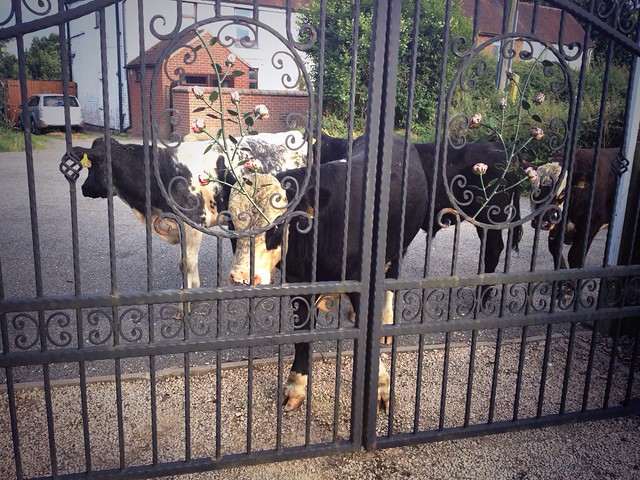 There were a couple of dog walkers at the other end of the lane, and the farmer asked them to wave their arms and make some noise so that the cows would walk away from them.  The dog walkers were not so sure about that.  We eventually got the cows to start to move, and herded them down along some country paths to get them back towards their field.  The poor things looked frightened to be walking around unknown ground, and to have everyone they met – well, the four of us – staring at them.  Luckily, they did not bump in to many other dogs.

Our unexpected visitors certainly made for a rather unusual Friday evening!