I mentioned the Moira Canal Festival in my last post, specifically the Morris Dancing that was going on, and how enjoyable that is, and I made reference to the large number of events that were going on in the festival.  It is an annual event at Moira Furnace, on the border between Derbyshire and North West Leicestershire, and as I live around the corner, is a regular place to visit.  I am always impressed with the range and diversity of events going on, and how there always seems to be something going on at the stage by the furnace.  We walked along the canal to get there, and passed a series of birds there.  The canal is in the process of being extended, which should be interesting for the local wildlife.

We passed a boat with a quartet playing some classical music as we arrived, and some model aircraft buzzed overhead.

We walked by some people in historic uniforms with various stands and props to show what World War I was like, which was a great attraction among the young and the old there.

As well as the World War I activities, there were also a number of people from an English Civil War re-enactment group, who performed on stage complete with cannon.  I decided not to get to close, hence the lack of photos, in case the bang from the cannon was all too much for Berta, but she seemed to take this in her stride, without even blinking, and giving it no more than a curious glance.

We crossed the bridge to see some of the classic cars that were on display on the far bank of the river, and in doing so, spotted some old tractors including a rather nice Ferguson on display.

There was even a small sit-on railway.

We moved on to watch the Morris Dancers, the details of which can be found here, although there were a few pictures.

I could have spent all day watching the Morris Dancing, but we went to see what else was going on, and came across the dog dancing display.  I went to get some food, and whilst in the queue, a spitfire flew overhead, very low, which both looked and sounded great.

I particularly liked this picture of the Spitfire, which was taken from the queue for the crepes… 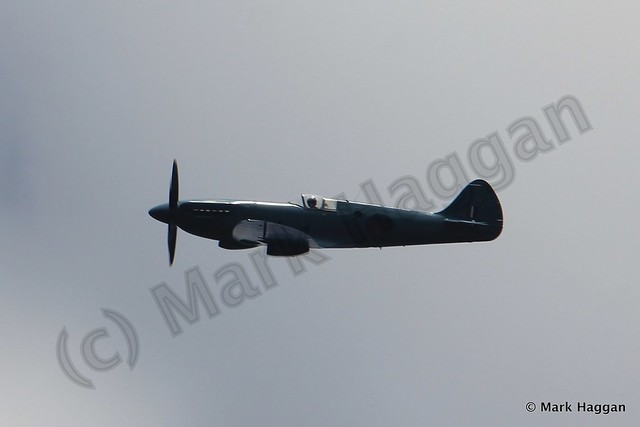 Next up on the main stage was a display on falconry.  There was a black barn owl – a rare thing indeed – called Sweep who was somewhat shy of the crowd after a difficult and life-threatening winter for him, and then his rather larger cousin, Pudsey the Eagle-Owl made an appearance.  I have tried falconry before, and it was quite a remarkable experience.  Pudsey flew with skill back and forward and around the members of the audience there, showing off his skill.

We watched the large steamroller, saw other stalls, tried the food, listened to the folk music at the Beer Festival tent, and took an interest in the various historic displays, before heading home back along the canal.  All in all, a rather excellent day out.