I am in Germany at the moment, and it struck me last night that I was tweeting in English whilst speaking in German in the hotel. When I say speaking in German, I mean making very poor attempts at communicating in German and just about understanding what I am being told. That said, I do enjoy speaking a little of the local language wherever I am, and one of the wonderful things that I always find about Germany is the remarkable patience and tolerance that the locals seem to have whilst listening to me mangle their language. In my experience, Germany is a friendly and helpful place, and a wonderful country in which to be a tourist.

There are, of course, some languages that I can speak better than others, like all of us. I can cope reasonably well with the basics in French and German speaking countries, with Arabic probably being my next best, although that’s a little rusty now. One of the great things about speaking a little Arabic is the unexpected look that you get when you try to speak a little. I remember arriving in a small café in rural Jordan once with my wife, and had that moment where everyone stopped and looked at us when we arrived. I asked for a table in Arabic, much to the relief of the waiter, and we ordered from the Arabic language menu. The local children were brought to meet us, and although we ordered four or five dishes, we were served a banquet, and when the bill came, only about half of what we actually ordered, let alone what we were served, was listed, and the waiter was adamant about not taking a tip. Again, everyone was exceptionally helpful and friendly, driven by speaking a few words in the local language. I have had the same experience in many countries in the Middle East, and even with my even more limited handful – literally five or ten words – in Swahili in East Africa.

Of course, one of the things that it is important to do is to make sure that you are speaking the right language. I remember arriving in Almaty in Kazakhstan, armed with a few words in Kazakh. I always try to learn a range of basic words like please, thank you, hello, goodbye, etc. I was met at Almaty airport by a colleague who took me to meet a driver who was delivering me to my hotel for the next few days. “Qayrli kesh” I said. The driver smiled. He took me to the hotel, and I said “Raxmet”, thinking I was thanking him. Again he smiled at me.

I had arrived in the early hours of a Sunday morning, due to the timing of flights, so I had all day Sunday to myself to look around the city before I went to the office on Monday. I came down for breakfast, and chatted to the hotel staff with my few memorised Kazakh phrases – which seemed to go down well, although a felt like a cabaret act – before we ended up conversing in English. Although it was a huge hotel, I felt like I knew lots of the staff just by chatting to them. It always amazes me how many people ignore hotel staff, or seem to treat them like automatons. I went off to explore the city, which is a tremendously interesting place, which no doubt will form a blog post in it’s own right one of these days – but as a quick brief, the Zenkov cathedral in Panfilov Park, which is made of wood, including the nails, is quite an amazing sight, particularly on a Sunday morning when it is in full use. 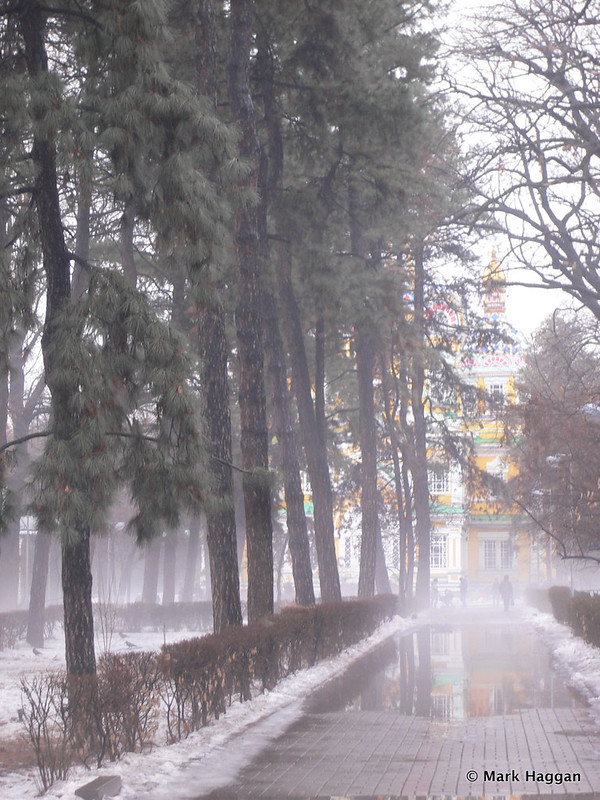 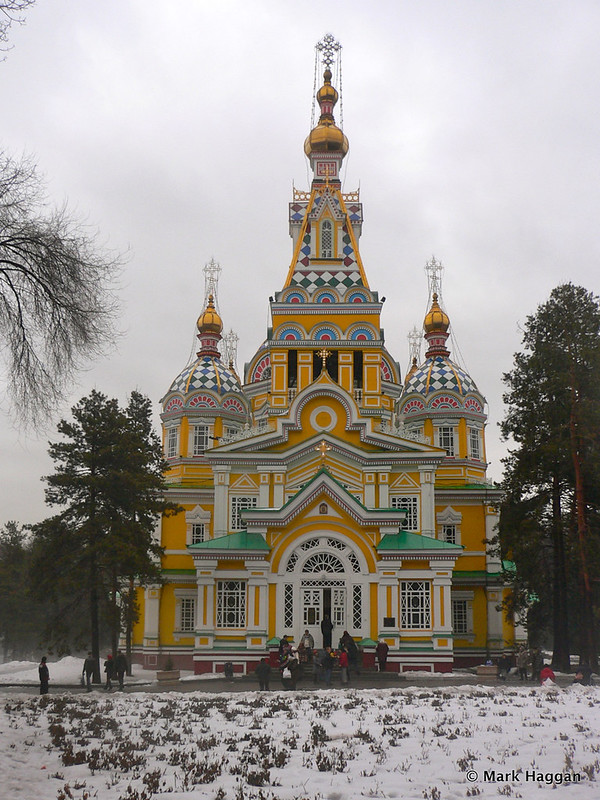 After my tourist day, I got up early the next morning to have breakfast before being picked up and taken to the office. Most of the other hotel guests appeared to be western Europeans or North Americans, and from the snatches of overheard conversations, most seemed to work in the oil industry. 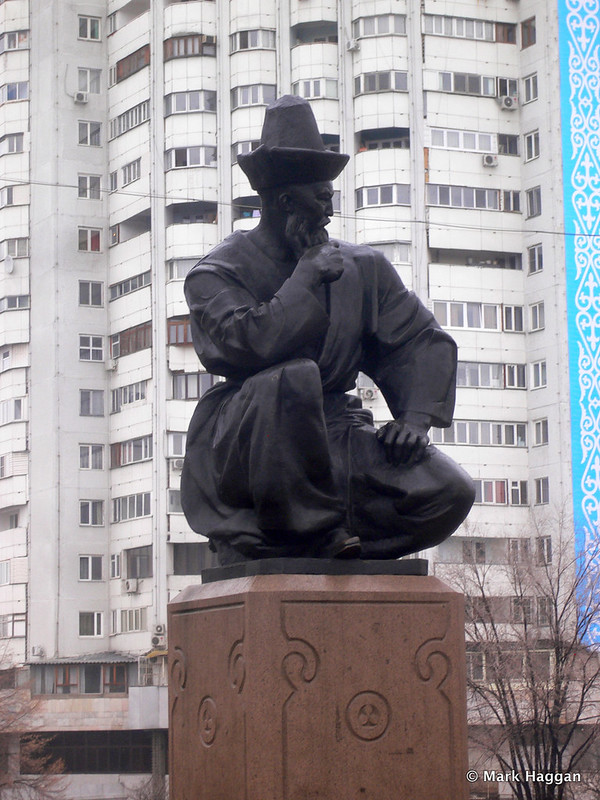 As I arrived in the restaurant for breakfast, the staff recognised me and intercepted me. “Qayrili tan!” (good morning) said the lady who spotted me in a jolly way , and talked to me like I was a regular guest. She took me through the main restaurant and into a room at the end which appeared to be a meeting room that was being used as an additional breakfast area, and which seemed to be separated from the main breakfast area. I sat down at the table, had a sip of coffee, and went to avail of the well -stocked but typical buffet, and realised first of all that I was the only man in the room, and was probably the oldest person there. I was also, by a remarkably long way, the least glamourous person there with the most remarkably flat shoes. I was, most definitely, in the wrong room. My fellow guests smiled politely at me, and I returned their smiles. I suspected that they were questioning why I was there every bit as much as I was.

When I finished my breakfast, I left the room, and by this time a sign had been put up by the door explaining that I had been eating my breakfast as part of a private function, which was product launch by Chanel. I have no idea what it was about me that made the staff think that I was part of this group, but in my mind, it was related to my attempting to speak Kazakh. Perhaps the staff just assumed that I was a model.  I’m not convinced, however, that was the case,

My colleague met me, and took me to the office. I was walking around the office getting on with the work that I was there to do, and overheard some of the phone conversations. My colleagues would answer the phone and say “Dobroe utro”. This was odd, I thought, and it was a language I recognised. I asked one of my colleagues why she and the rest of the team were answering the calls in Russian and not Kazakh. She explained that the normal language of business in Almaty was Russian, although some other parts of the country only spoke Kazakh. I must have sounded most odd in my attempts to speak a few words in a language that, not only was not the main language in the city, but was one which a significant number of the inhabitants could not speak. From then on, I used Russian for my hellos and thank yous. This seemed to be received better than my Kazakh.

I had a similar incident in Rwanda where after attempting to spend a day speaking in French in the office, I was asked to speak in English because some of the people I was meeting did not speak French.

So, all in all, I do believe that not only is it polite to learn a few words in the language of a country in which you are a visitor, it’s quite fun, it leads to all sorts of adventures, and it might just make your life easier. But, before you go to the trouble of learning a few words in the language, make sure that you are speaking the right one.