I was part of a group recently looking for something to do in London for an evening, and we came up with the idea of doing a treasure hunt.  However, rather than us having to research the trip and putting together a plan for the evening, with someone to oversee it, we used the services of a company called In The Hidden City.

The Hidden City tours offer a series of tours of various cities, and in London there are multiple tours in different parts of the city, starting at different times of the day.  We chose one appropriate for an evening, and turned up at a bar on the South Bank.  The great thing was that we did not have to start at a precise time. Each of our team captains had a mobile number registered, and when the teams were ready to start, we sent a message to a mobile phone text number.  In reply, we received the first clue for us to solve, and when we had solved that, we sent the answer by text message back to the number.  In return, we got our next clue, and so on.  Like all good treasure hunts, the clues were cryptic enough to get us thinking, but very solvable.  They also took us through parts of London where we might not otherwise go – even though they were in the centre and in the tourist areas – and drew our attention to some of those wonderful things that are easy to walk by every day without noticing; a particular statue, or an inscription carved into a building, or a view that although spectacular is easy to miss.

The hunt took around two hours to complete, which included times to stop.  Each stopping point was an impressive location, and with a bar.  Each of the bars was a little quirky, and that we might otherwise miss.  In one of them, we had to ask for something specifically from the bar staff – it was included in the price – and guess some of the flavours, which was quite fun.  We also had discounts in some of the bars.  If you wanted to skip a stop, you could do that by text message too.  Either way, it did not impact your treasure hunt time.

We continued around London to complete the treasure hunt, and successfully managed to get the answers to all of the clues, and settled into the (very interesting) last pub of the evening.  It was great fun, and educational, all for a few pounds each (it cost £16 per team).   There are hunts around the Science Museum, and the Museum of London, as well as several in various areas of London, and also in Manchester, Brighton, York and Newcastle.

Of course, as well as enjoying the company, the competition and the conviviality in the bars that we visited, we also enjoyed the wonderful views that London provides. 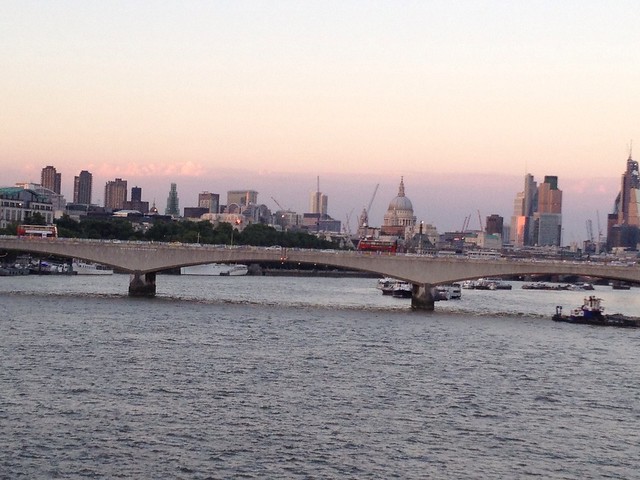