You might start to think that I am obsessed with Castle Donington. I mentioned how it has a great history in motorsport, rock music and aviation, and how wonderful the Donington Collection, the world’s largest collection of Grand Prix cars, is. I also have mentioned that when I was there for lunch yesterday, Ayrton Senna’s 1984 Toleman had arrived at the café at Donington. I have not, though, commented much on the impressive aviation pedigree of the village, other than that it was the home of the great and alas now defunct British airline bmi British Midland, and home to East Midlands Airport. There is also the rather wonderful and quirky Donington Aeropark.

The village has an impressive number of fly bys, given not just the airport and bmi being nearby, but also as it is on the periphery of Derby, home of Rolls Royce aviation engines. I have watched all sorts of aircraft make close approaches, including retiring military aircraft, like the BAe Nimrod, and new civilian aircraft like the Airbus A380 and the Boeing 787 Dreamliner. 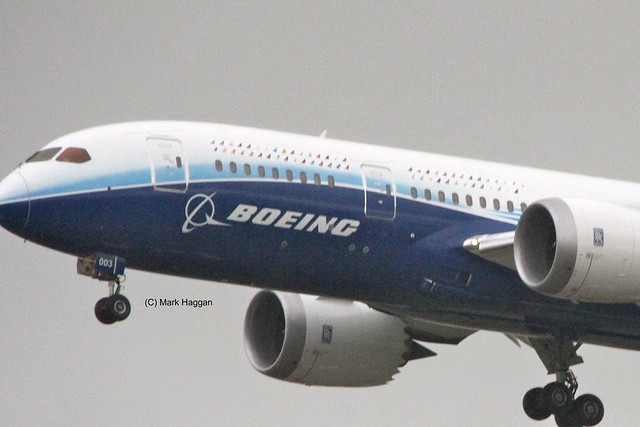 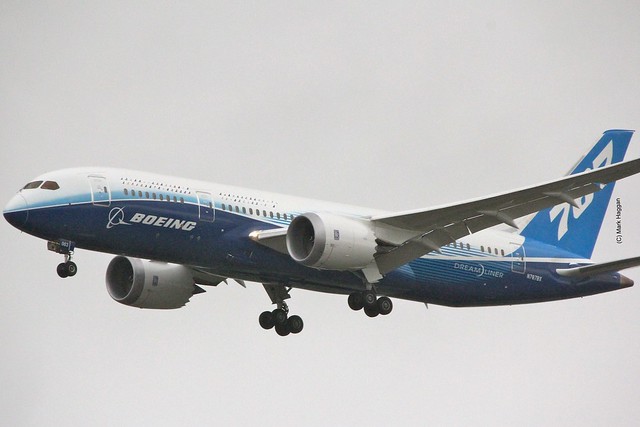 Some of these aircraft will see the end of their days at the Aeropark, near the end of the runway at East Midlands airport. Last time I went, it was a princely sum of £2 to spend the day among the planes.

In my mind, the star attraction is XM575, the Avro Vulcan. It is a beautiful aircraft, and if you are my age or a little older, you probably know it for three things; that it is the aircraft that was designed to carry the British nuclear deterrent, that it flew the incredible Operation Black Buck missions of 1982 as part of the Falklands War, and being famous for being a beautiful aircraft. Pictures of Operation Black Buck, when it was part of the campaign to end the neocolonial aggression of the Argentinian junta, which featured the aircraft flying out of Ascension air base, were common in the press at the time. The operation was undertaken by the V fleet, with the Vulcans flying from the single runway at Wideawake airfield on Ascension, and fourteen Handley Page Victors acting as a refueling fleet to support the Vulcans. The Vulcans had Dash 10 pods from Buccaneers added to provide additional electronic countermeasures against the Argentine Tigercat missiles.

When Black Buck I started, Vulcan XM598 headed off to bomb the runway at Port Stanley, with XM607 in reserve. XM598 had a pressurization fault meaning that XM607 operated the mission. Eleven of the Victors were used to refuel the aircraft, with some of the Victors being refueled themselves by other Victors whilst in flight to get the Vulcan to Stanley. The crew onboard knew that there may not be enough fuel to allow the mission to complete and return safely to the limit of the refueling fleet, and that this may be a one way mission. A ditch into the South Atlantic would probably not have provided any realistic capability to rescue those onboard. The crew decided to keep going, completed their mission, mainly in radio silence, and as they passed over the British Task Force sailing to liberate the Falkland Islanders from the aggression, they used the codeword “superfuse” indicating a successful mission. XM607 managed a successful rendezvous with the refueling fleet and made it back to Wideawake. Flight Lieutenant Martin Withers, commanding XM607, was awarded the Distinguished Flying Cross, and the pilot of the last Victor to refuel XM607, which did it at risk to its crew, was awarded the Air Force Cross. Six more Black Buck missions were operated from Wideawake and played a very important role in the liberation of the people of the Falkland Islands.
I still find the Vulcan a beautiful aircraft, and it is an incredible aircraft to behold. 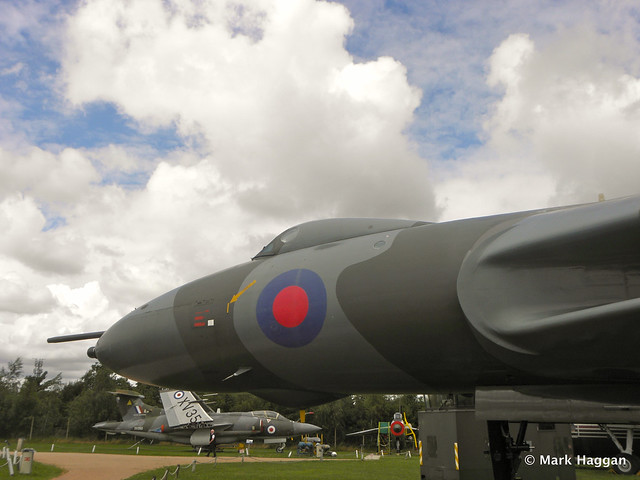 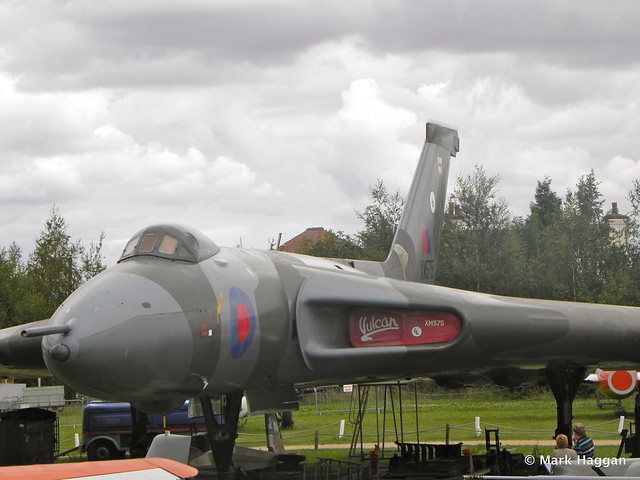 There is also a Nimrod, which helped with the mission, on display at Donington Aeropark, as well as a Buccaneer. 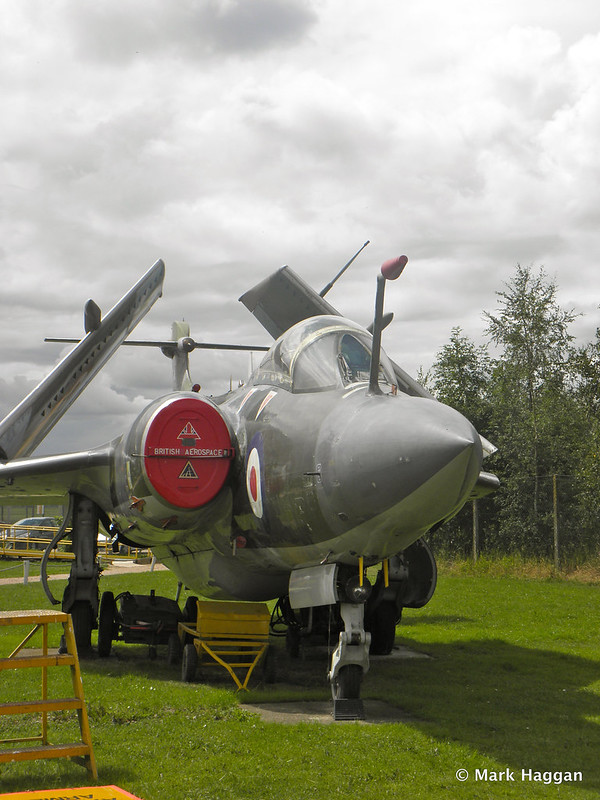 Among the other classic aircraft there is a replica of a Mark IX Spitfire. 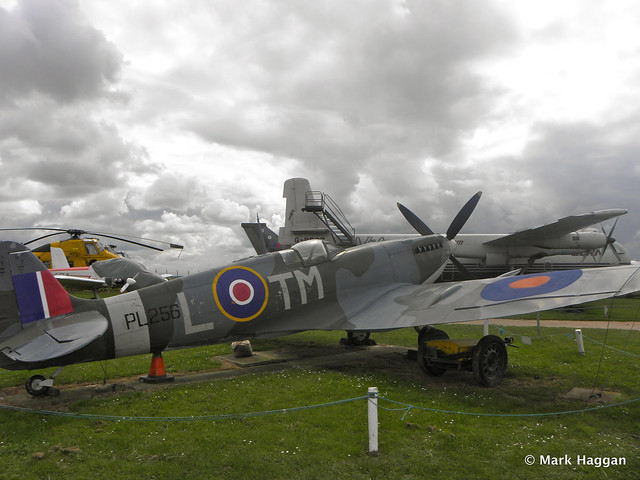 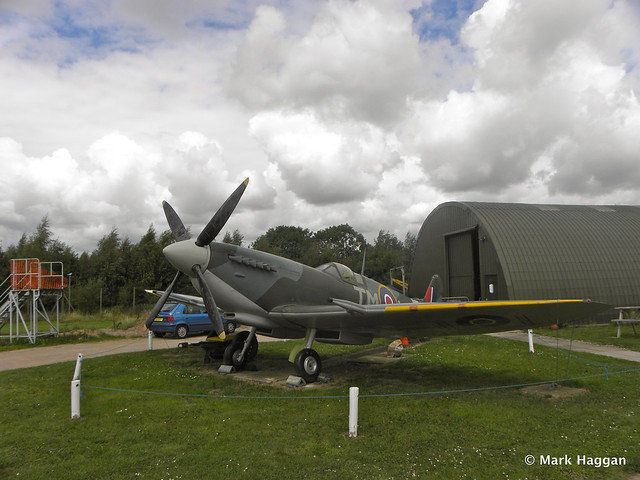 The English Electric Lightning is another aircraft that will be familiar to military aircraft fans. 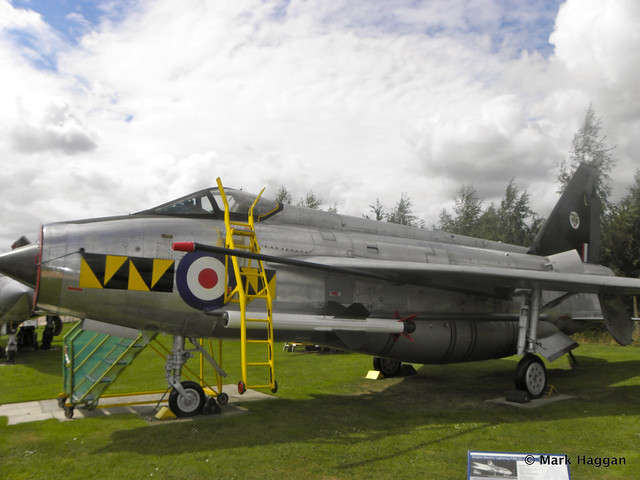 There are, of course, a series of other military aircraft there. 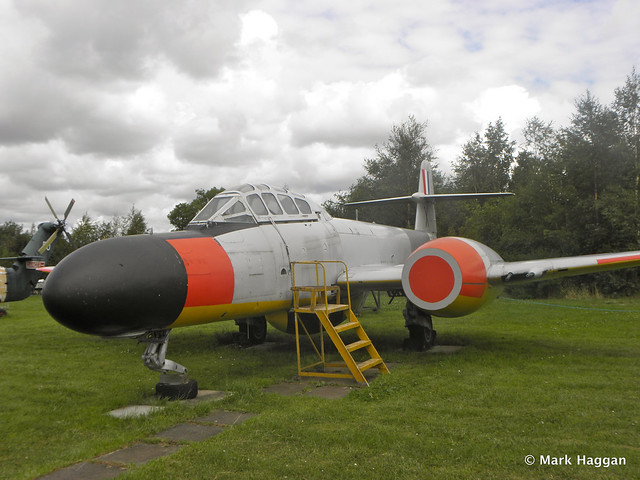 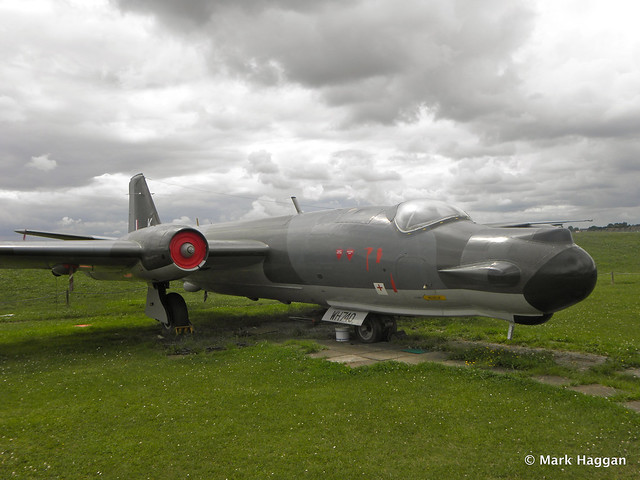 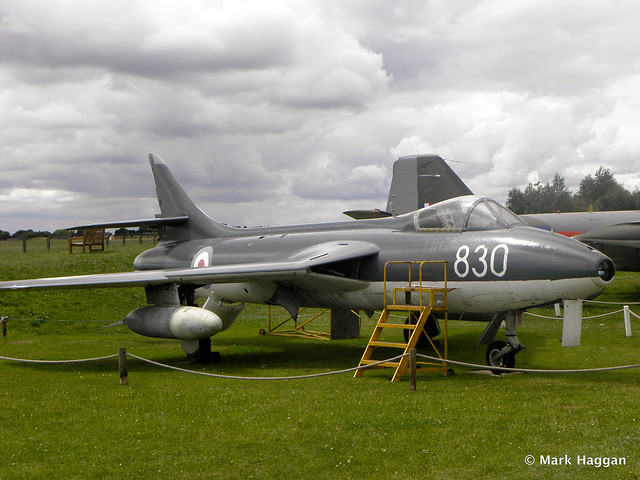 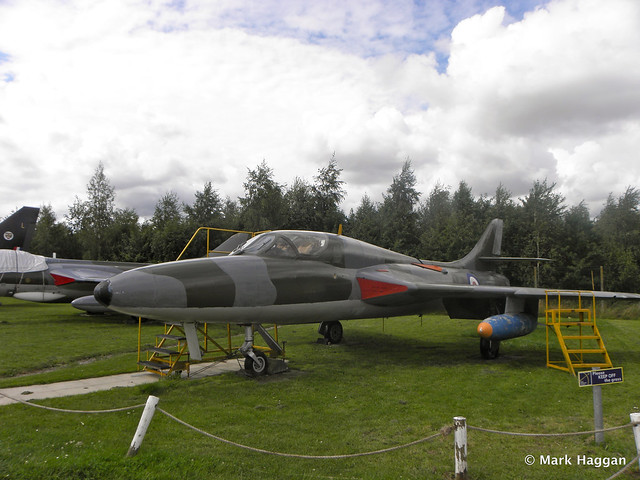 There are also some helicopters on display. 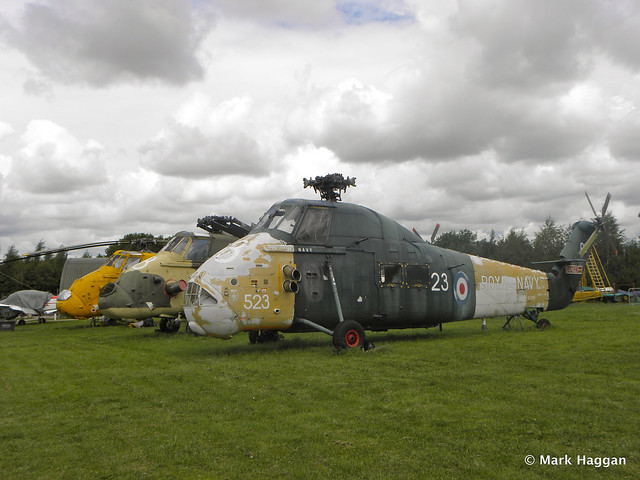 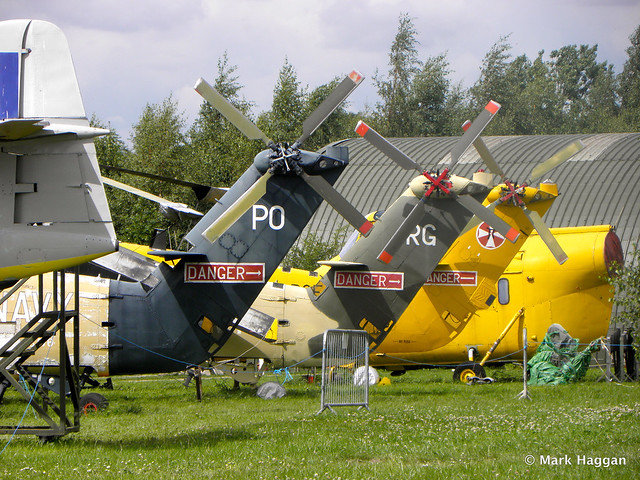 There are also civilian aircraft on display, including those that you can enter. 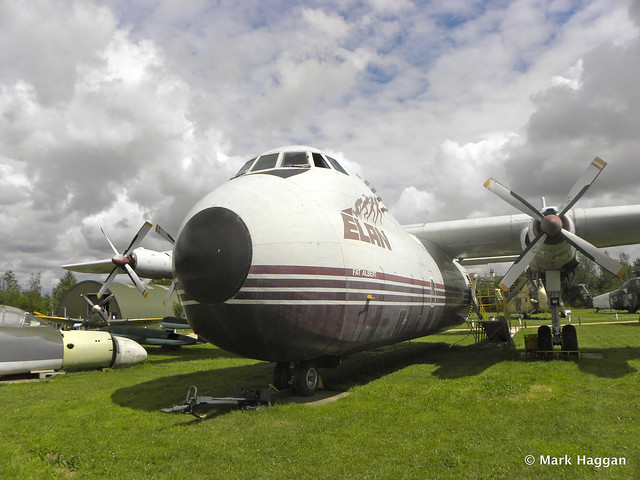 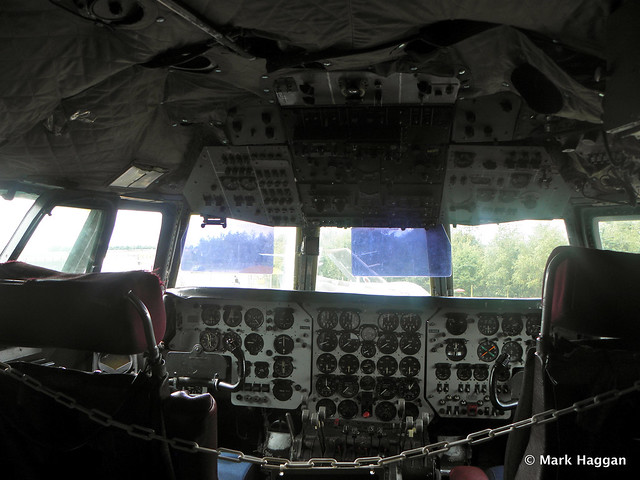 Some of the civilian aircraft are limited to just the cockpits being there. 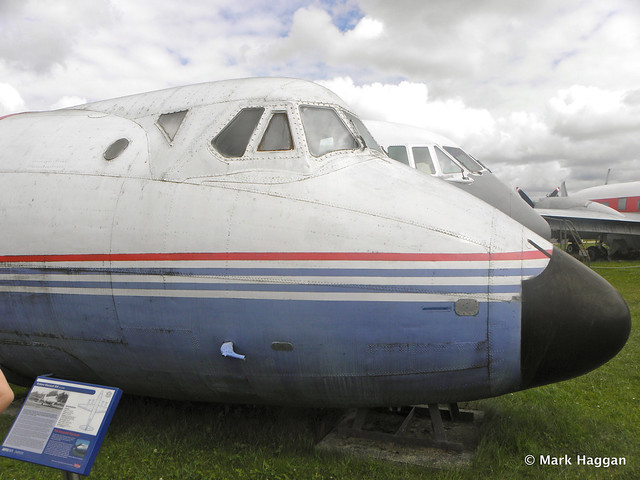 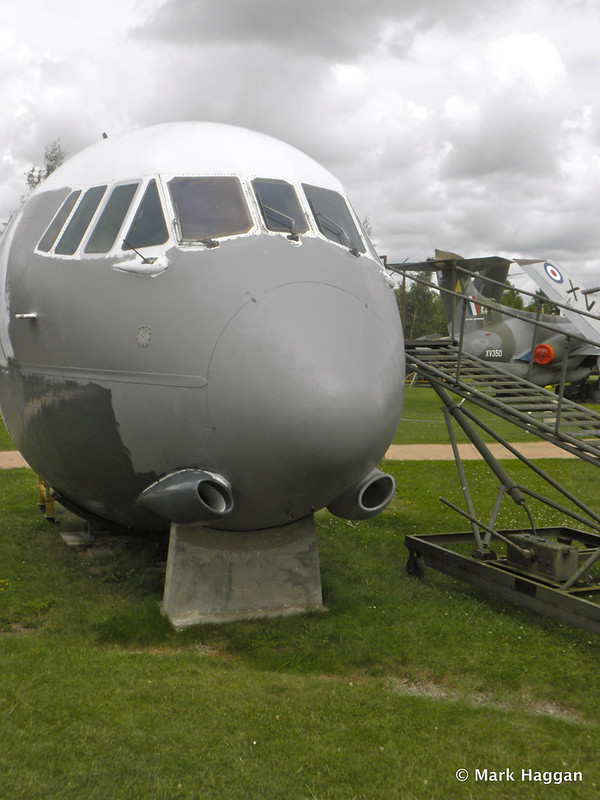 You also can sit on the hill at the park and have a good view over East Midlands Airport. 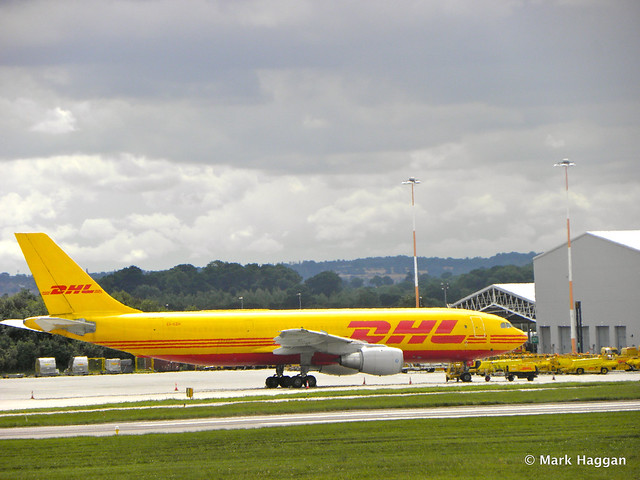 The Donington Aeropark website does have some details of the aircraft that are on display. It is only a few hundred yards from the Donington Collection – come out of Donington Park near The Collection, turn left, and when the road turns left at the roundabout, go straight on into the Donington Aeropark car park – so worth visiting both if you are in the area. For fans of fast moving vehicles, it is a wonderful trip.

Thanks to Tonia & Andrew on Twitter last night for reminding me about this wonderful place.