Bosnia – or rather, Bosnia & Herzegovina – is not necessarily the first part of Europe that comes to mind when people think about holiday destinations, but it has, like most of the world, some remarkably beautiful places. One of the places in particular that is worth visiting is the city of Mostar, in the Herzegovina part of the country. The city is most famous for its bridges, with the name deriving from the local word for bridge, Most, and bridge keepers, Mostan. The Old Bridge, or Stari Most, is an incredibly scenic bridge across the river Neretva, originally built by the Ottomans in the 16th Century, after being commissioned by Suleiman the Magnificent. The story goes that the bridge was built by Mimar Hayruddin, who was ordered on pain of death to build the bridge, which at the time was the world’s widest man made arch. 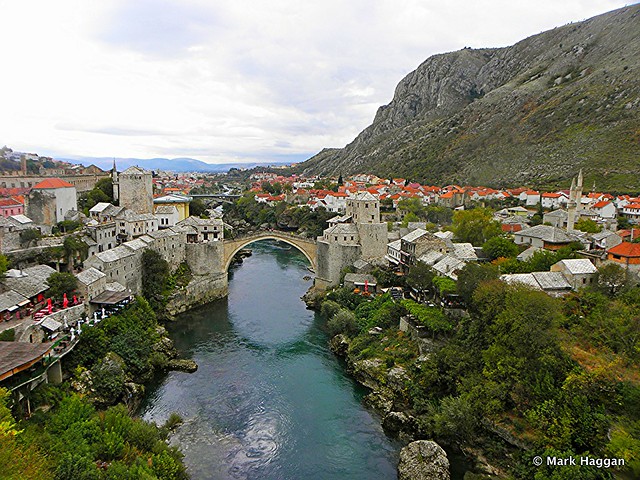 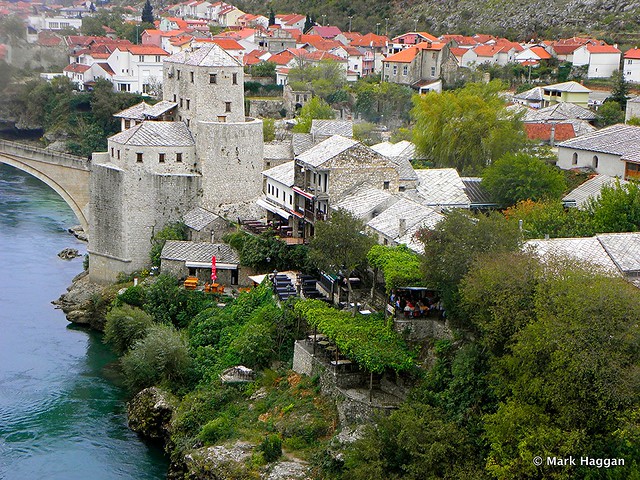 Many people will remember television coverage of people ducking and running across the bridge, during the wars in the former Yugoslavia in the 1990s, before it as finally destroyed on the 9th November 1993. The bridge was reconstructed between 2001 and 2004, and stands again across the river. 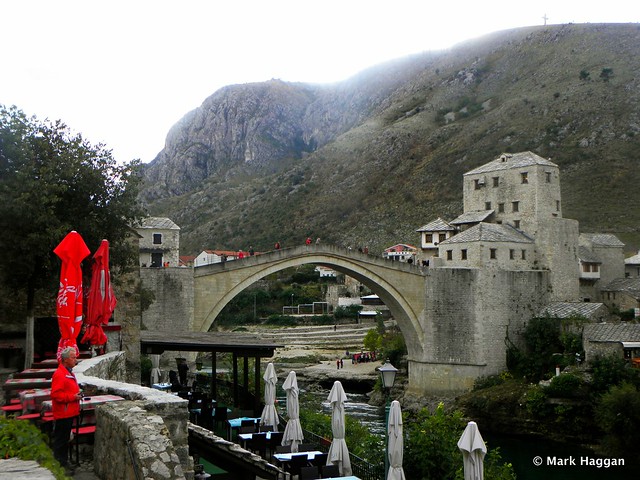 We drove to Mostar, and the urban sprawl quickly gave way to the old city. I was expecting to see Stari Most, but was surprised by the number of other impressive buildings around the bridge. Walking along one side of the bridge looked like a scene from Lord of the Rings, with a series of small shops and cafes. We followed along this side of the bridge to the also impressive Koski Mehmed Pasa mosque. The staff there were remarkably friendly, and for a small contribution, they allowed us to climb to the top of the –very narrow – minaret, which gives a spectacular view over Stari Most. 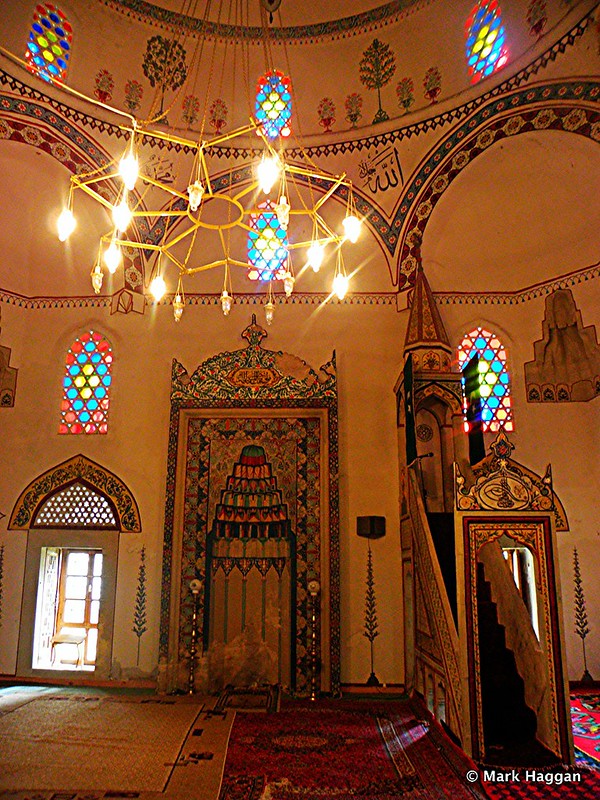 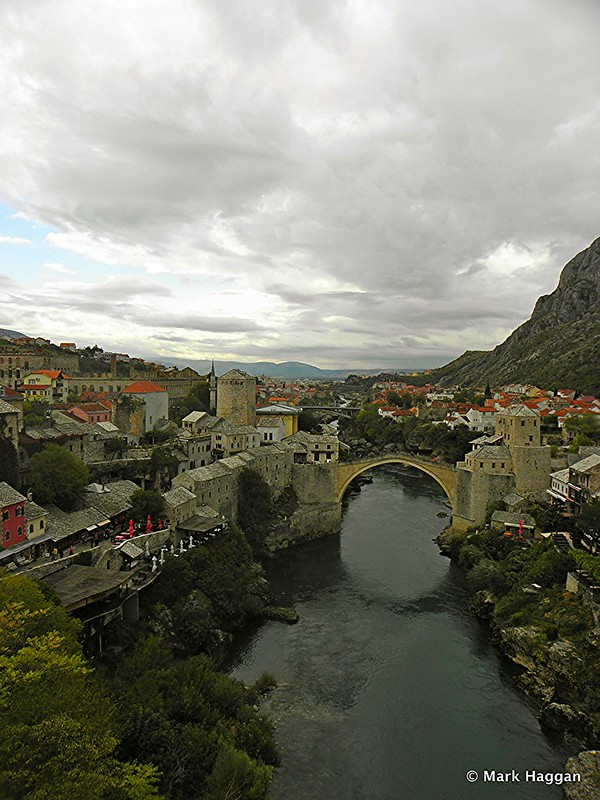 We headed back over the bridge, admiring the old town around it, and stopped to have some lunch. One of the interesting things about Bosnia & Herzegovina is the currency. The currency is, officially, the Convertible Mark, or Konvertibilna Marka, which was established as part of the Dayton Peace Agreement, which was linked to the Deutsche Mark at the time, hence the name. It retains a fixed exchange rate to the Euro based on the old Mark. However, given that many people are passing through the city, the various shop keepers and café owners will accept Euros or Croatian Kuna for payment. It was an impressive piece of mathematics in each location to work out the bill in our chosen currency. 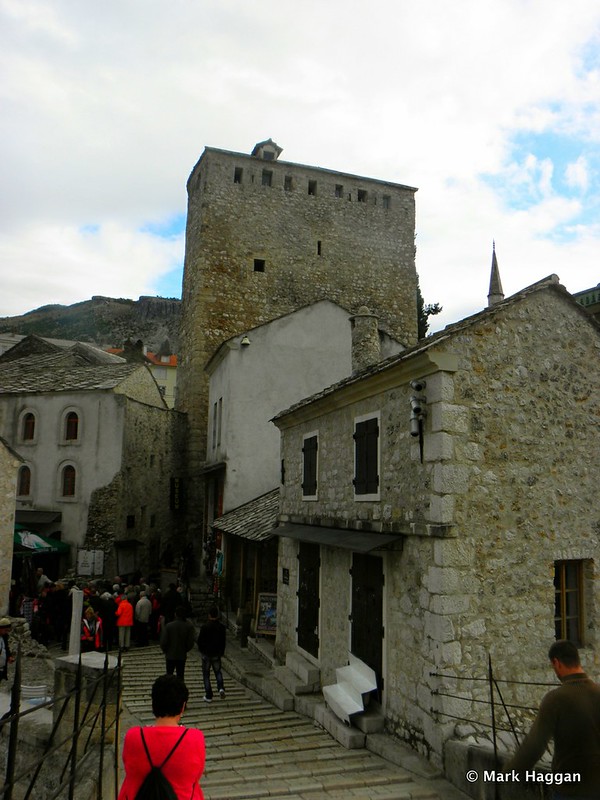 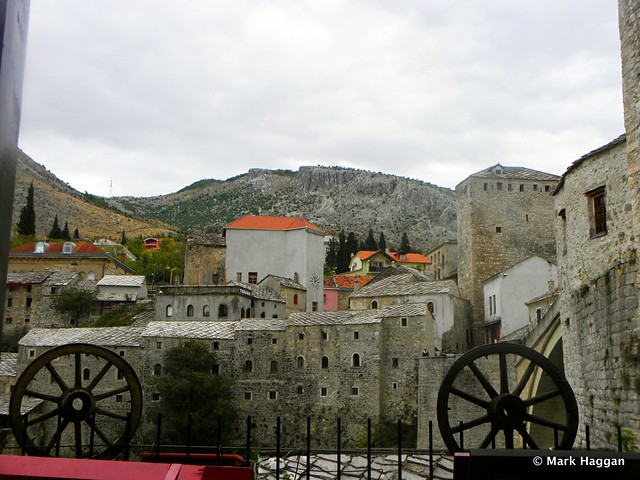 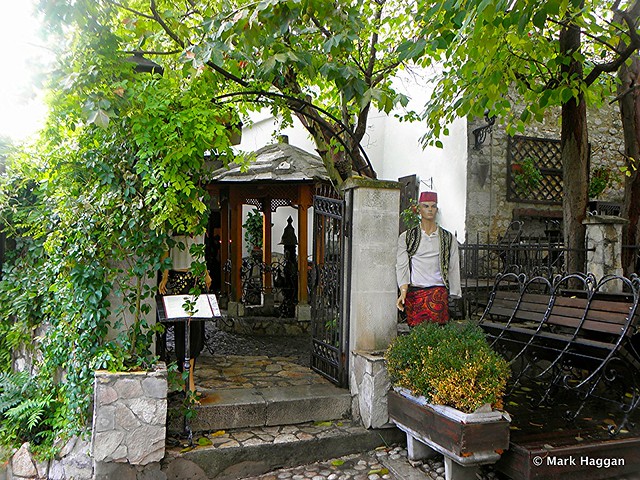 The food was good and plentiful, and was made up of local delicacies, such as cevapi, or kebabs, which were delicious. We sat in a small café staring at the bridge, watching the world go by, which was an opportunity to see the famous Mostar Divers. There is a tradition of diving from the bridge into the river below, and the view from the bridge below shows that there is a deep middle of the river, but a very shallow edge at each side, and it is a way long drop to the water from the bridge. 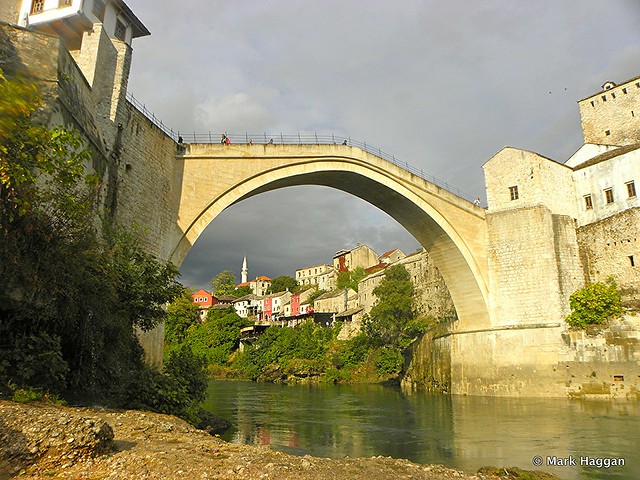 As well as the local divers, you can, for a fee of €25, become a diver for the day. This was an offer I decided not to take up.

There is also a second, smaller bridge, called the Crooked Bridge, or Kriva Cuprija, that crosses the Rabobolja creek, a tributary of the Neretva River. The story behind this bridge is a little less clear than Stari Most, but one of the tales that we heard was that this was a test to see if the design would work before moving on to Stari Most. It is an impressive bridge in its own right, even if it is much smaller than the more famous river crossing. 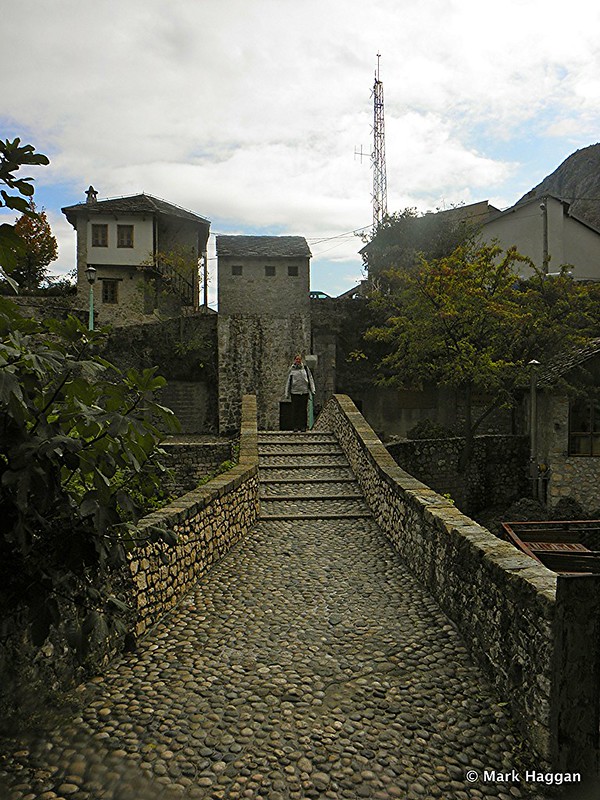 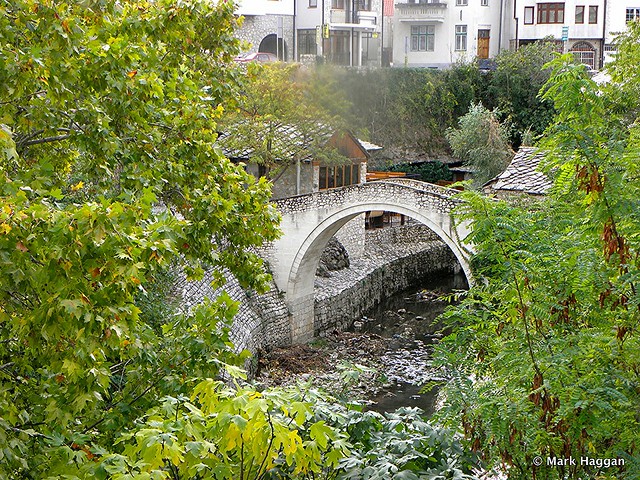 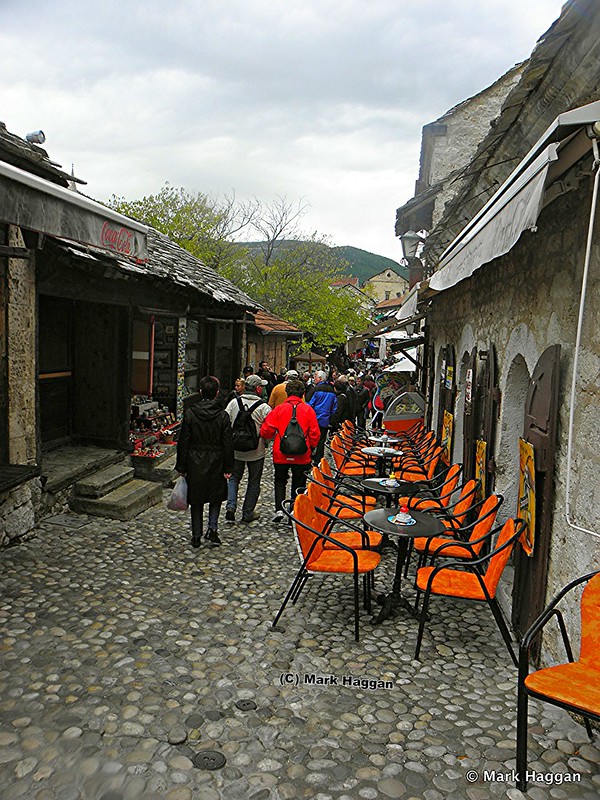 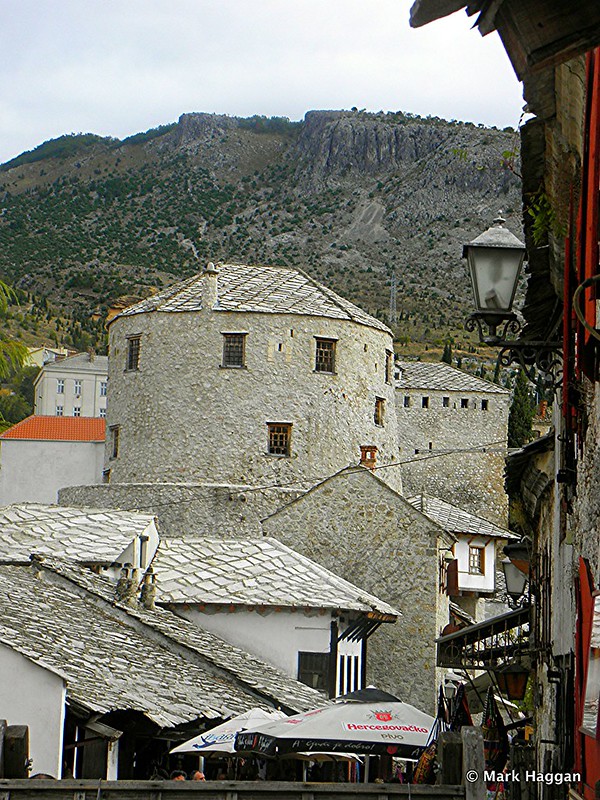 A short walk from the bridges into the more modern parts of the town contained stark remainders of the recent history of the city and the country, with walls covered in shrapnel damage and bullet holes. The city bears the scars of the wars of the 1990s, and the juxtaposition of this against the beautiful old town and Stari Most was quite sobering.
This is just one of many impressive places to see in Bosnia & Herzegovina, which hopefully will soon be remembered for the impressive architecture and landscapes rather than the somewhat more violent recent past.