I know the title, “Siri and The Three Laws of Robotics” sounds like the topic of a really dull lecture or the title of a science fiction episode, but it is neither….

My investigations of humorous responses when asking Apple’s Siri silly questions has so far included an awareness of Monty Python, a view on the new Dr Who, and even knowledge of the Ylvis song “The Fox”. One of my colleagues, Emma, pointed me towards another Easter Egg in the programming of the digital personal assistant today.

Those of you who are interested in robotics, or are fans of science fiction, are probably aware of the Three Laws of Robotics, or The Three Laws, as written by Issac Asimov:

If you are not familiar with them from Asimov, then Dr Who fans might remember them as the laws that governed the actions of the robots in The Robots of Death, one of Tom Baker’s adventures (I was very young at the time). Even the bookshop Waterstones mentioned them in the Q&A about their recent O.W.L.S. (Ornithological Waterstones Landing Service) launch:

Q: But aren’t you worried about the owls developing intelligence and using the knowledge of our home addresses to enact some sort of sky-based revenge? Enslaving us all to deliver their internet orders to their nests?
A: No, the laws of robotics means that this can never happen. The owls will be incapable of harming a human.

(Go on, click the link above if you have not already. It’s great).

So, with all these people knowing the Three Laws in some detail, it would be safe to assume that Siri is aware of them to prevent some attack on humanity predicated on voice activation through a personal digital assistant. Well, it seems that Siri’s memory is not what it used to be. When you ask Siri, the response is: 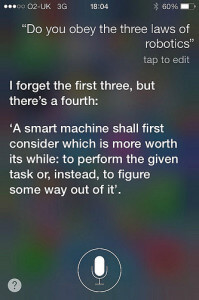 Siri and The Three Laws of Robotics

So, be very careful what you allow your iPhone to control…