Last weekend saw the final round of the BRDC F4 Championship 2014 at Snetterton, with the unusual situation that six drivers could still win the championship with the last three of thirty races to go. The season has been filled with fantastic racing and close action, and this last weekend was likely to be no different.

The first of the weekend’s three races was held on Saturday, and it was not short of drama. Diego Menchaca made a great start, passing the pole position car of George Russell, and taking the lead, with Gaetano di Mauro also having a great start and passing Russell. However, further through the field, collisions between Diego Borrelli and Rodrigo Foseca, and Will Palmer and Jordan Albert, saw the red flags make an appearance, and the race was halted. Menchaca did well at the restart, and led the race to the chequered flag, followed by Charlie Eastwood and title challenger Sennan Fielding, with Gaetano di Mauro in fourth.

This result left Maini leading the championship from Russell – who finished eighth and seventh respectively – by nineteen points, with Fielding into third place, just three points behind Russell. Sunday was going to be an interesting day.

The conditions on Saturday had seen bright blue skies and a wet but drying track, whereas Sunday was a cloudy but dry day. The second race of the weekend saw championship leader Arjun Maini start from pole, with his key challenger, George Russell, right behind him. Raoul Hyman passed Russell at the start from third position, while Maini got a good start. Hyman was challenging hard, knowing that a win for Maini would mean that Hyman would no longer be in contention for the championship. On the fourth lap, Hyman passed Maini, as did George Russell. Sennan Fielding was in fourth place. The battle was now between Hyman and Russell, with the young South African managing to stay ahead of Russell, as Russell set the fastest lap of the race. Meanwhile, championship leader Maini was going the wrong direction in the race standings, with Sennan Fielding and Struan Moore also passing him. The race finished in that order, with Gaetano di Mauro in a good sixth place. GP2 champion, Joylon Palmer, was on hand to award the trophies.

This made for an interesting last race on Sunday afternoon. There were still, incredibly, four drivers who could be champion. A podium finish for Arjun Maini would see him as champion. All of the four drivers had already won four races this year, giving an idea of just how close the series had been.

We stopped to chat to Gaetano di Mauro in the paddock before the race, and he was the perfect gentleman, spending plenty of time with us, and even posing for a photo with my son Xander, who was more interested in getting back to see some racing than having his photo taken. We wished him well for the final race. 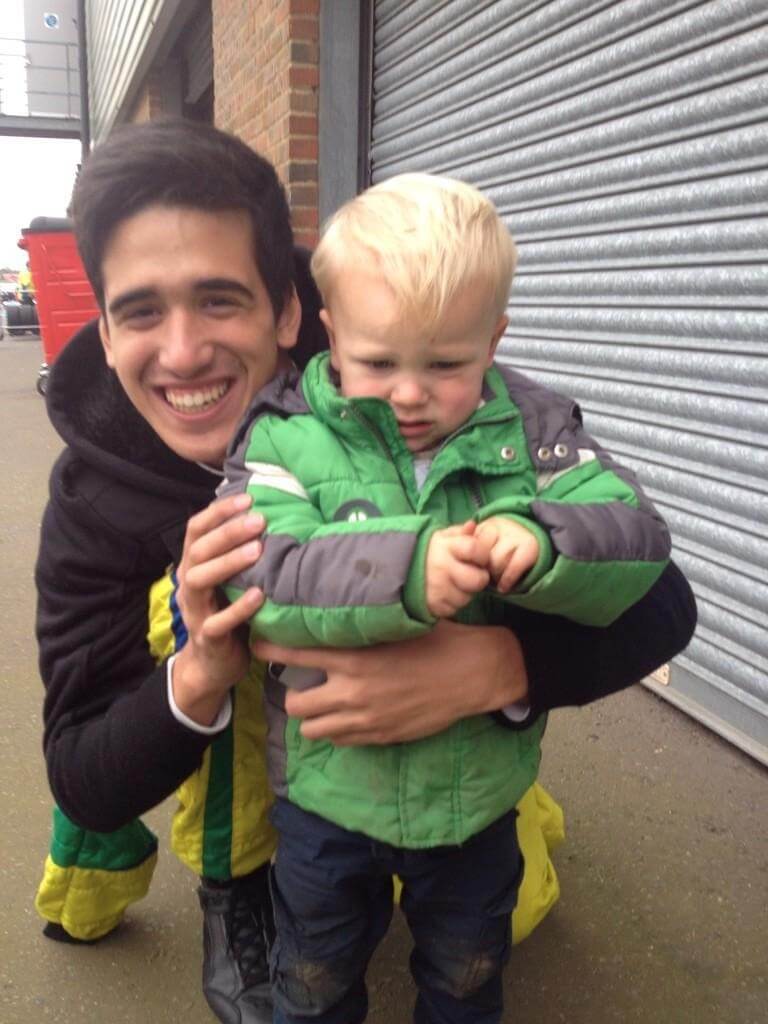 Just about everyone who was not part of a pit crew left the paddock and headed up the hill that overlooks Riches, the first corner at Snetterton, at the end of the Senna Straight. Actually, the hill gives a great view over Montreal, Palmer, Agostini, Hamilton and Oggies, the first six corners of the circuit.


George Russell started the race from pole, with title rivals Hyman, Fielding and Maini following in that order. Our new friend, Gaetano, was starting from eighth. The green flag lap seemed to take an age as Russell controlled the field around the track. The race started, and Hyman passed Russell for the lead. Palmer spun at Riches, but managed to keep moving. Russell fought back and retook the lead, and started to pull away from Hyman. However, George’s championship chances were not entirely in his hands, as a second place finish from Maini would see him stay on the top step for the series title. Russell’s lead was soon over a second, and Charlie Eastwood passed Maini, then Fielding, for third place. The race finished in that order, and that meant that George Russell had overhauled the points total of Arjun Maini, and became the BRDC F4 2014 Champion by just three points.


The hill emptied, as we all headed over to watch the podium celebrations. George Russell went to the top step and received the trophy for winning the race. Next up, we had the podium for the Jack Cavill Pole Position Cup, which again saw George Russell take the championship. Finally, we had the championship podium, and by this stage, I’m sure that George had become well acquainted with the top step. His prize of £25000 is augmented by a test drive in Abu Dhabi with the Arden GP3 team. He seemed, understandably, delighted, as did his many supporters watching him, as Jonathan Palmer gave him his trophy. A mention too for Arjun Maini, who was very soon in front of a television camera, and who gave a wonderfully professional and upbeat interview, which must have been far from easy given how close he had been to becoming champion. I am very sure, though, that we will see plenty more from the four drivers racing for the title in the last race.


Russell’s Lanan Racing team have had a fantastic year, taking both 1st and 2nd in the championship, and they soon posed for a team photo on the podium.

Of all the many racing formulae that I have watched in 2014 – and there have been many – I have found the BRDC F4 championship to have been consistently the most exciting and close fought races of the year. I am already excited to see what 2015 holds.