Last weekend saw a different type of entertainment at Donington Park as motor racing made way for the Download Festival 2016. Donington has been home to heavy rock festivals since August 1980 when seven bands made up the first Monsters of Rock festival. The annual event has been known as Download since 2003, and this year’s line up saw Rammstein, Black Sabbath and Iron Maiden as the headline acts for the three nights. My first trip to Donington had been back in 1996 for the Monsters of Rock festival, with a line up headed by Ozzy Osborne and Kiss, and Download 2016 saw some continuity, with Saxon who had performed all the way back in 1980 on the bill this year again, as was Ozzy from that show 20 years ago as part of Black Sabbath.

The week had seen beautiful sunshine, and as I had a drink in a pub garden on the Thursday evening, I was hopeful for a lovely sunny weekend of watching some good music. Social media was filled with pictures of the beautiful sunsets in Donington on Thursday evening, and although Friday started well, a band of rain moved in early in the afternoon and never really left. Unsurprisingly, I didn’t take a DSLR camera to Download, so the quality of the photos is not quite the same as normal, and I was spending more time enjoying myself than taking pictures, so they are few in number too.

The main stage this year was renamed the Lemmy Stage after the lead singer of Motorhead who had passed away at the end of 2015, and there were no shortage of tributes to the ever popular performer. I had seen him perform many times, including several times at Donington, and he and the band never disappointed.

The Lemmy stage saw Alien Ant Farm on Friday, then the rather unusual act that is BabyMetal, the Japanese group that see heavy metal music with three teenage singers of the J-Pop style. I suspect it was the first time that I have seen performances that included that style of synchronised dance moves at Download, but I have to saw, the performance was great, and certainly entertaining. It got the crowd going, and a remarkable number of people seemed to know the words.

Some more @babymetal_official from yesterday 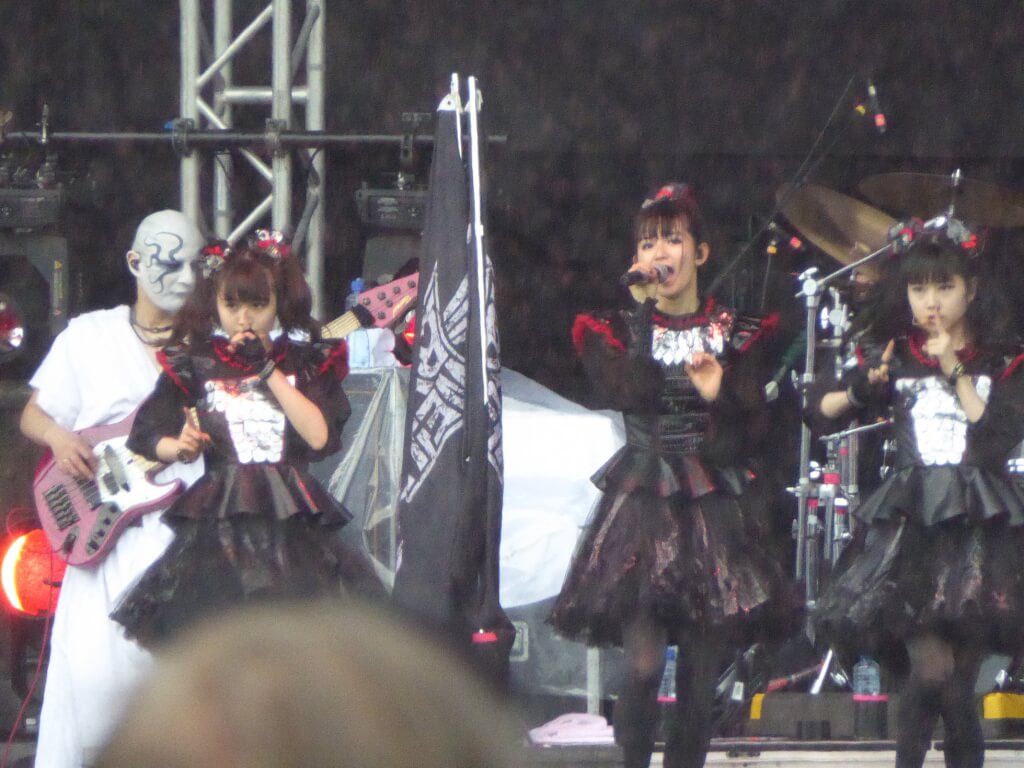 One of the great things about a festival like Download is discovering new bands and for me, the first new act of the weekend was German band Kadavar who were playing on the Maverick stage. It’s unusual that the first member of the band that stands out is the drummer, but Christoph Bartelt’s energetic style in the middle of the stage defined the performance that, although modern, was reminiscent of some of the rock bands that, in my humble opinion, are some of the greats, with a hint of Black Sabbath or Led Zepplin. A very enjoyable set. 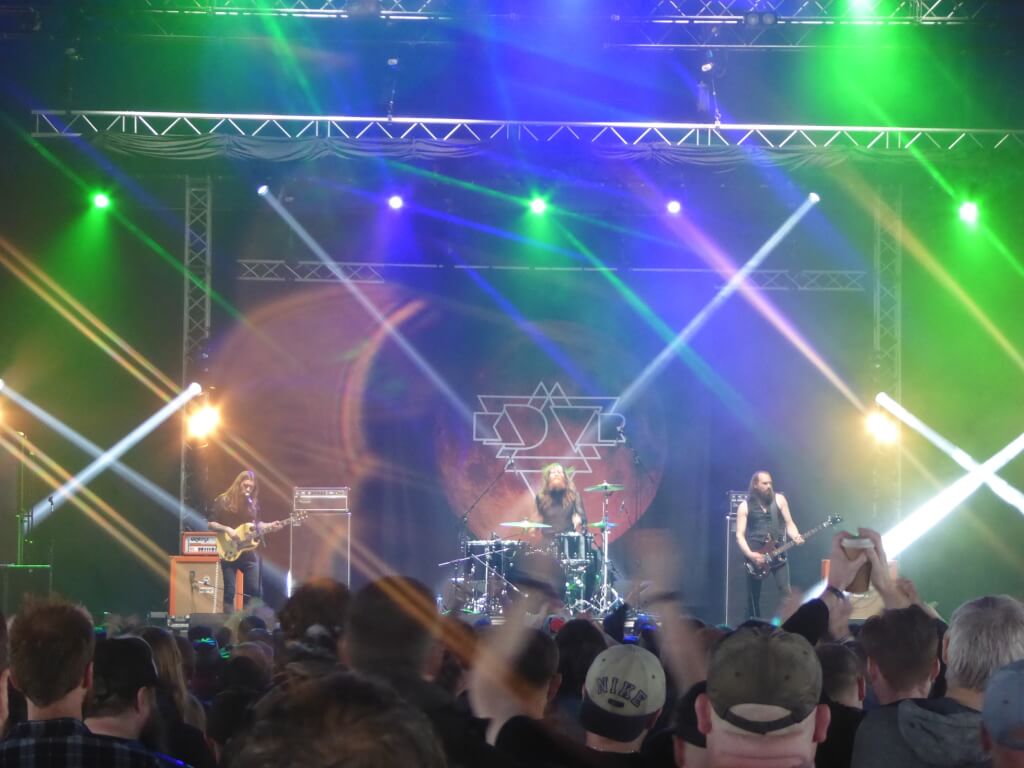 Next up were The Wildhearts. The band formed in 1989 when lead singer Ginger left The Quireboys, and saw some commercial success in the mid 90s, with songs like “I Wanna Go Where The People Go” and “If Life Is A Lovebank I Want An Overdraft” hitting the charts. For me, The Wildhearts always remind me of a gig they played in Belfast’s Limelight in the spring of 1994. It was a fantastic evening, with the band in fine form, the music uplifting, the atmosphere electric and my friends ecstatic. One of my most enjoyable gigs, and the rose tint that evening had given me may be part of the reason why I enjoyed Ginger and his band mates quite as much as I did on Friday.

Up next on the set list was Gutterdämmerung (that’s not a mis-spelling). We had no idea what to expect, and were intrigued when what looked like a huge white sheet appeared covering the stage. It turned out to be what might be best described as a piece of performance art from Bjorn Tagemose. A film was projected onto the screen (it wasn’t really a sheet), and performers appeared through and from behind the stage, interacting with it. Imagine a noir film from the 1920s only instead of a piano making up for the lack of dialogue, a rock band complementing the sound, with a cast including Slash, Iggy Pop, Grace Jones, Joshua Home, and Jesse Hughes. Henry Rollins played a major part, and the crowd cheered as he appeared from behind the screen to play his part on stage rather than just on screen. As the story unfolded, Lemmy appeared on the screen, and at the end of the show, Henry Rollins introduced a tribute to the late star, who played the part of The General in the film.

I can’t describe Gutterdämmerung in a way that will do it justice, just to say that if you get a chance to see it performed, take it.

Next up was a trip back to the main stage to see Rammstein close the evening, with a pyrotechnic filled performance executed with flair and theatre, keeping the crowd entertained and wowed in equal measure.

We headed out of the arena slightly perturbed that one of the trees might be watching us.

Is it just me or does this tree appear to be looking at me? #dl2016

The ground was wet and muddy by this stage, and I was pleased to be heading off to a warm bed and a hot shower. It also meant that on the way back to the site on Saturday, I was able to stop off at East Midlands Airport where Ed Force One, the Boeing 747 piloted by Bruce Dickinson that takes Iron Maiden on their world tour had touched down. It is a much more impressive beast than the last Ed Force One that I had been invited to the hangar to see when the band toured in 2011 in a 757.

One of the bands that I discovered on a previous Download trip was Lawnmower Deth. I was aware of them from the late 1980s and early 1990s, and saw them perform at Donington with a very comedic show where some of their classic covers like “Weebles Wobble” entertained the crowd. The singer, Pete, announced a special guest, which given his previous promises of being joined on stage in earlier years, we assumed was a wind up. Then, Kim Wilde appeared and there was a great duet to Kids In America. The best duet of the weekend that I heard, and one of the most entertaining performances of Download 2016. If you missed it, you missed out. 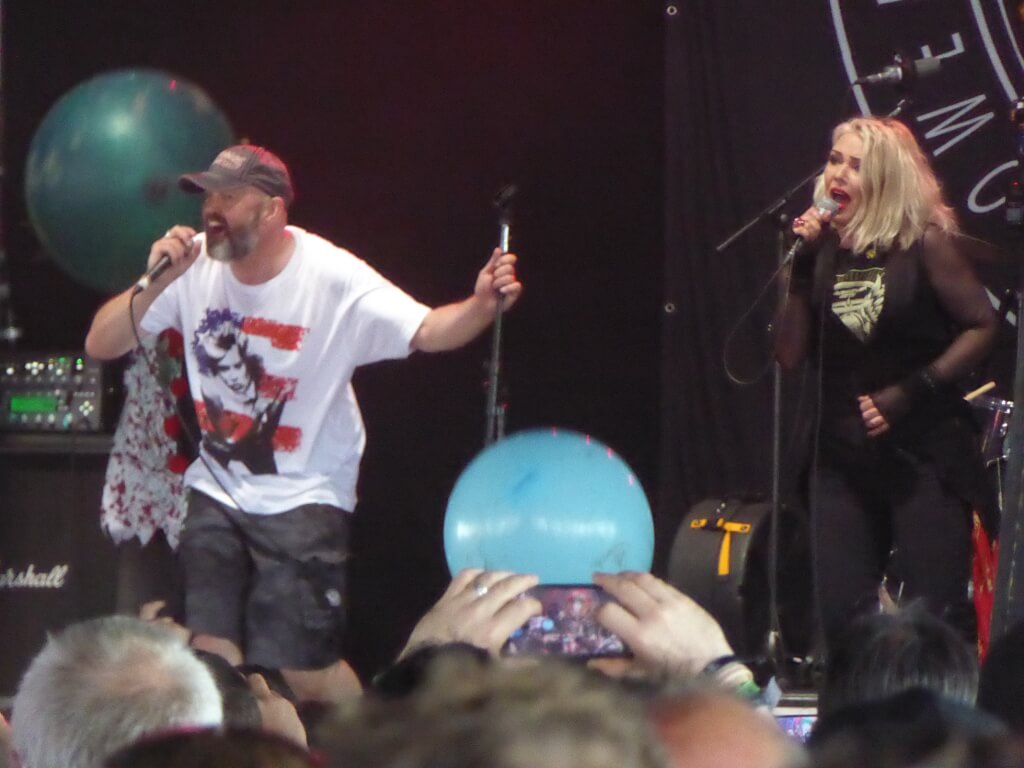 We watched plenty of other bands, sampled various foods and drinks, saw some wrestling, and heard Megadeth – with a so so cover of Anarchy in the UK – and the Deftones before the main event on Saturday. Since my mid teens, Black Sabbath have been my favourite band, and their performance at Download in 2012 was one of the best shows I’ve ever seen.


Download 2016 had been billed as Black Sabbath’s last ever Donington gig, and was part of their farewell tour, scheduled to end in their home city of Birmingham in February 2017. The band took to the stage with plenty of flames, and their guitarist, Tony Iommi, the one constant in a changing line up over almost half a century, appeared and played some classics.

He was joined by two of the three other original band members, with Gezeer Butler on bass and Ozzy Osborne singing. The set list was made up of plenty of early material, with Paranoid, War Pigs, Behind The Wall of Sleep and N.I.B. played alongside the band’s eponymous title track. 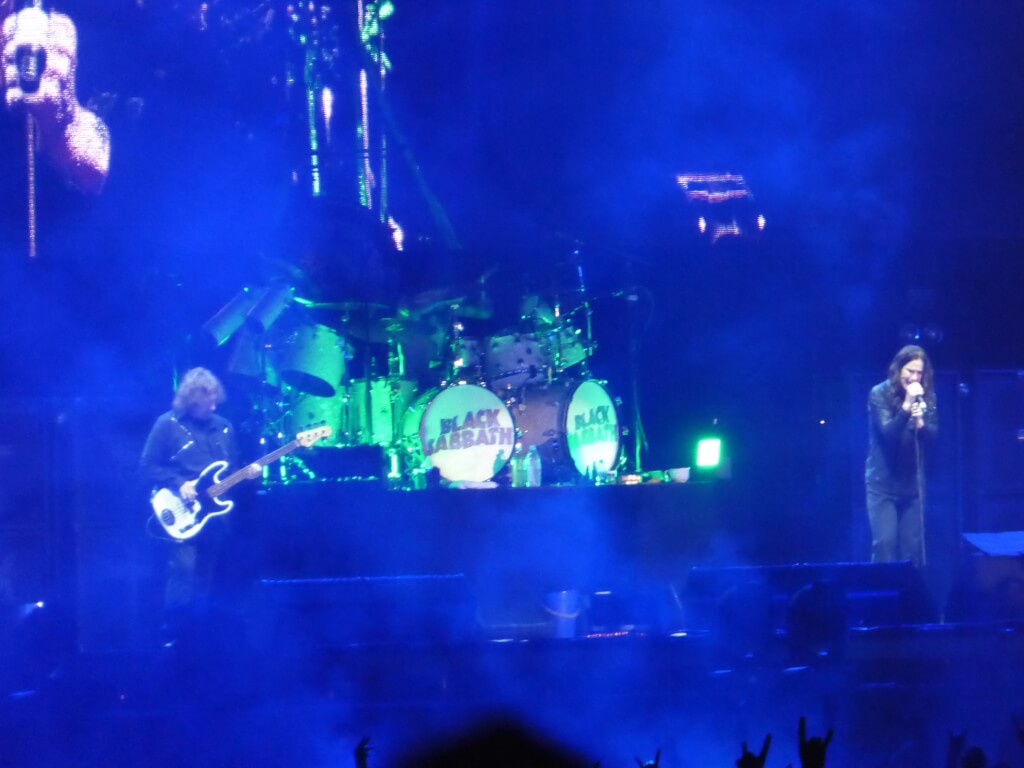 It was a great show, and I was singing all the way through, and although it was not quite as good as their performance in 2012, I still enjoyed every second of it. If it’s the last time I get a chance to see the band that helped to shape the formation of heavy rock, then I will recall them with happy memories.

The rain had stayed intermittently through Saturday, and was still there on Sunday, so when we got back to the festival on Sunday, the ground was saturated and there was mud everywhere.

Disturbed took to the main stage, and took the crowd’s focus from the mud around them to the music, including a cover of Simon and Garfunkel’s Sound of Silence. Lzzy Hale from Halestorm joined them for a cover of Where The Streets Have No Name, then Wolfsbane’s Blaze Bayley helped with a cover of The Who’s Baba O’Reilly. Finally, Benjamin Burnley from Breaking Benjamin appeared for a cover of Rage Against The Machine’s Killing In The Name Of.

Next up was Nightwish. Pipe player Troy Donockley announced to the audience “you should see what you look like from here. Like the Battle of Agincourt with more blood and more booze”, and given the amount of mud around us, I could understand why. By this stage, there were streams of water flowing through the site, but plenty of people continued to party.

To give you an idea of how wet it is, I'm standing beside Lake Download near the Lemmy Stage #DL2016

Nightwish lead singer Floor Jansen belted out a set, and the band were the most entertaining act of the day up to that point. There were plenty of people singing and dancing around me, not letting the inclement weather detract from a good time. 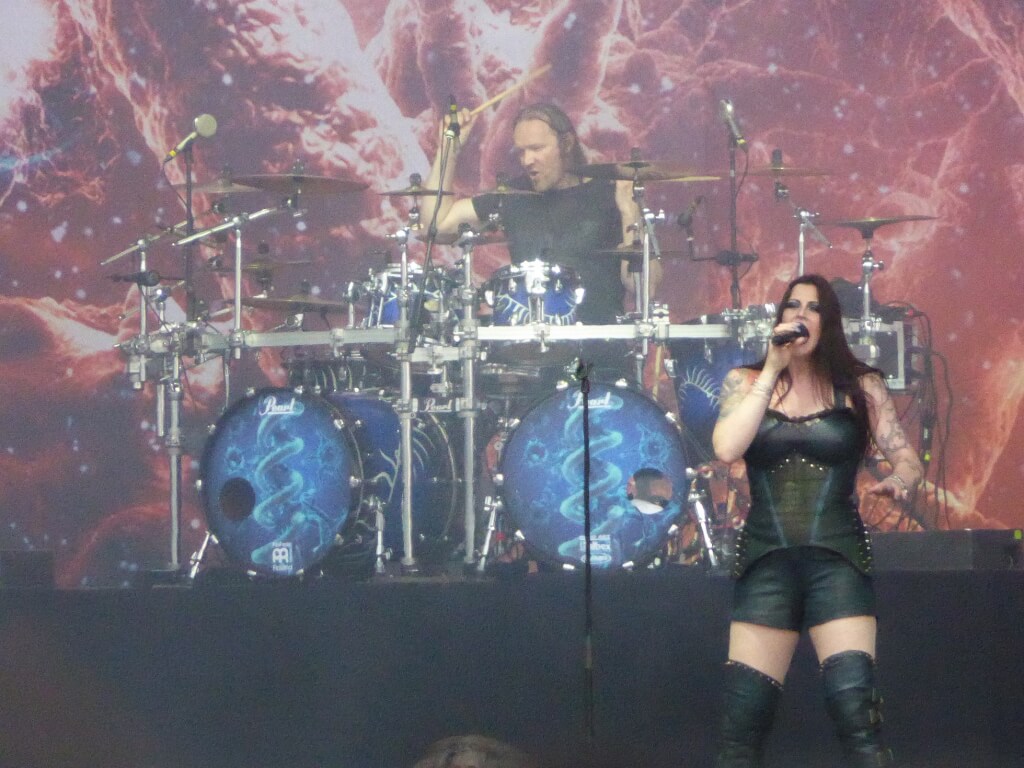 As the band finished, the sun came out, and the first hints of a blue sky appeared. The sunny weather gave a different complexion to the otherwise still wet and muddy festival.

The sun has come out here at Lake Download. #DL2016

We had made our way forward after Nightwish ready for Iron Maiden. Half an hour before the festival closing set started, the crowd behind us was already looking pretty huge.

Big crowd behind us already waiting for Iron Maiden

The band appeared on stage, with Bruce Dickinson jumping around as he started with some songs from their current album. The crowd’s wild excitement was reserved for some of their classics, and as Bruce appeared on stage in uniform with a union jack to perform The Trooper, he announced “Happy Birthday, Your Majesty”, a reference to the Official Birthday for the UK’s 90 year old monarch, Queen Elizabeth II.

Was reasonably close to @ironmaiden at Download yesterday. Superb as always.

Eddie, the mascot of the band appeared, and Bruce continued to entertain not just with his singing but with his commentary. Although the new tracks were well received, the classics resulted in a chorus from the crowd, with Fear of the Dark and Number of the Beast leading the singing.

As part of the encore, Bruce talked about those who had lost their lives in terrorist attacks in Paris and Orlando, and played Blood Brothers in solidarity.
We made our way out of Donington Park in the mud, thankful that the rain had stopped, and as we put our minds to Download 2017, we spared a thought for those who would have the task to clear the site.

As always, a great weekend and one that brought back so many musical memories.