The ancient city of York is filled with impressive buildings, mainly dating back many centuries, like Clifford’s Tower, which I wrote about recently.  However, one of them stands out above the rest and can be seen not just from most of the city, but even when entering and leaving York.  The grand cathedral church that dominates the skyline is York Minster.  Minster is an old reverential term applied to certain churches, and often helped to name places, like Westminster, Axminster, and Leominster. York Minster is formally called The Cathedral and Metropolitical Church of St Peter in York, but to most, it is York Minster. 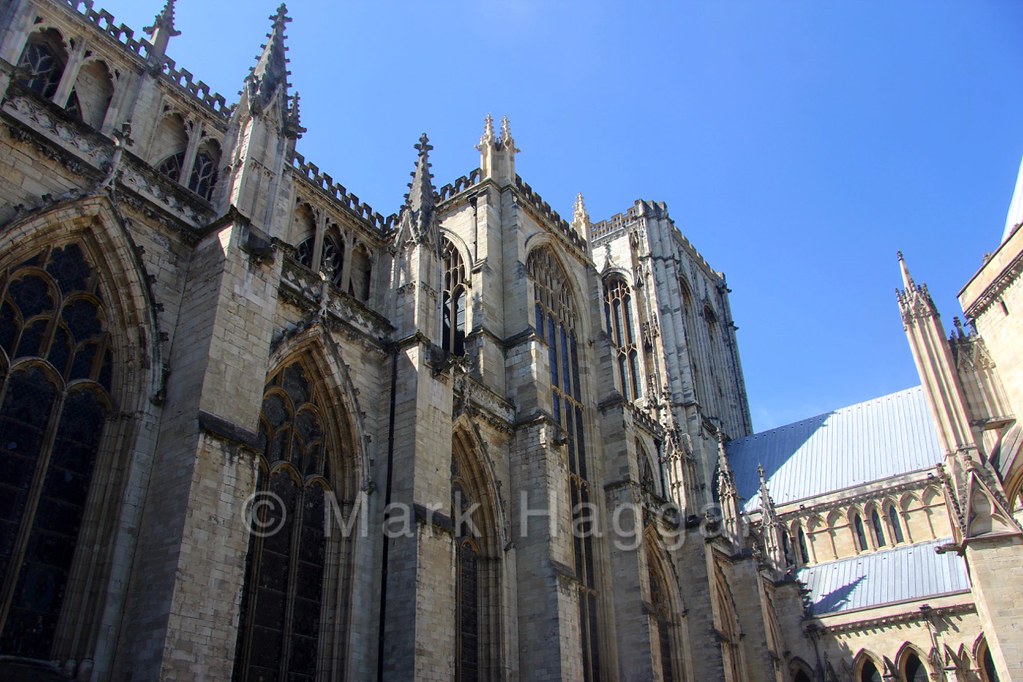 The impressive York Minster is the seat of the Archbishop of York, the second highest office of the Church of England.  There has been a church here since before the Norman conquest, although the current structure is not that built back in 627AD. Various fires and battles involved the site before being rebuilt in 1080 after a Viking attack on the previous building five years previous. The cathedral has been developed and has seen improvements and additions over the years, and the current site is truly remarkable. The stained glass windows are a wonder, and the sound of Great Peter, the mightiest of the various bells there can be heard across the city. 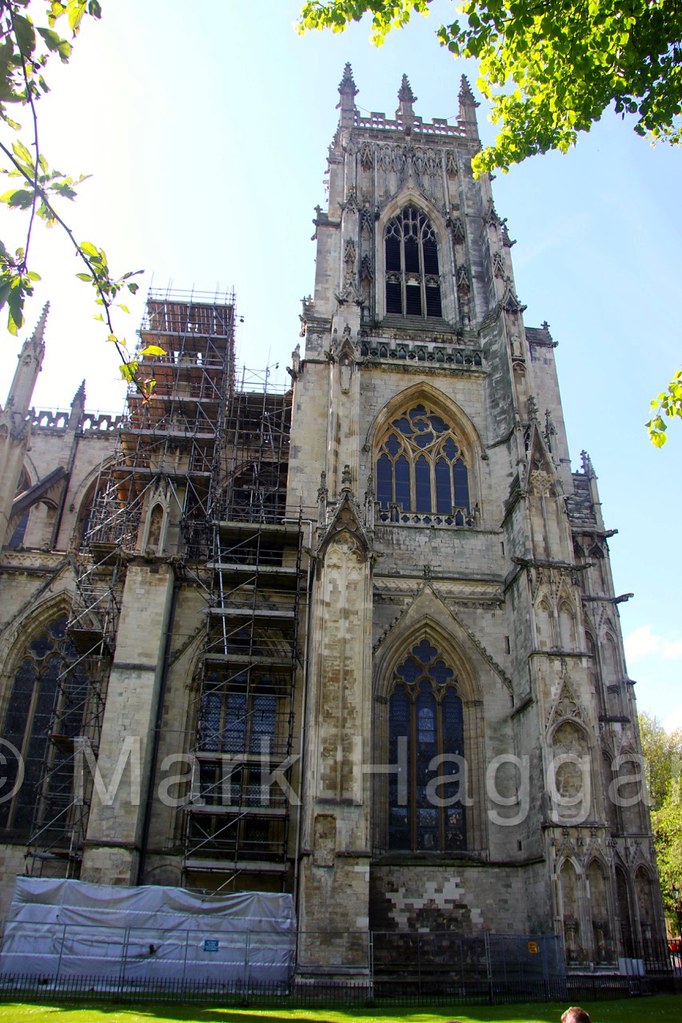 As well as the cathedral itself, the site also includes supporting buildings like the Deanary, and a park beside the cathedral links these buildings with the Minster and a cenotaph. 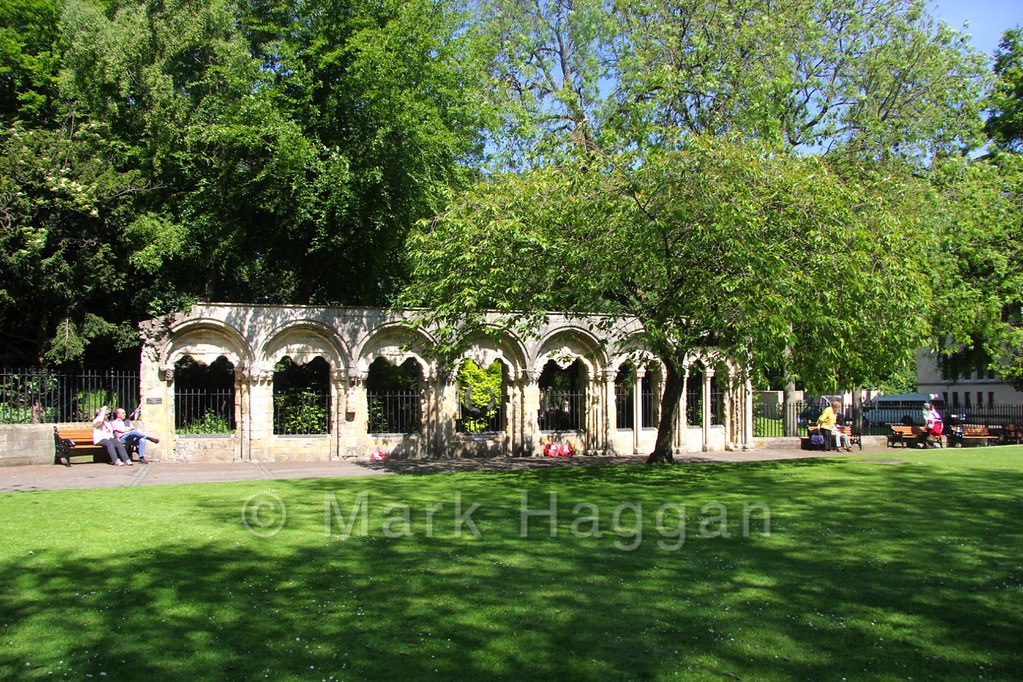 As you walk around the park, look out for a statue through a gate. It is a seated figure, known as The Seated Figure, and originally stood (or, perhaps, sat) inside at the Great East Window, and was moved to its current location in 2013, when a new statue replaced it inside the Minster. The statue is of St Peter, and the new statue stands 7ft tall inside the cathedral. 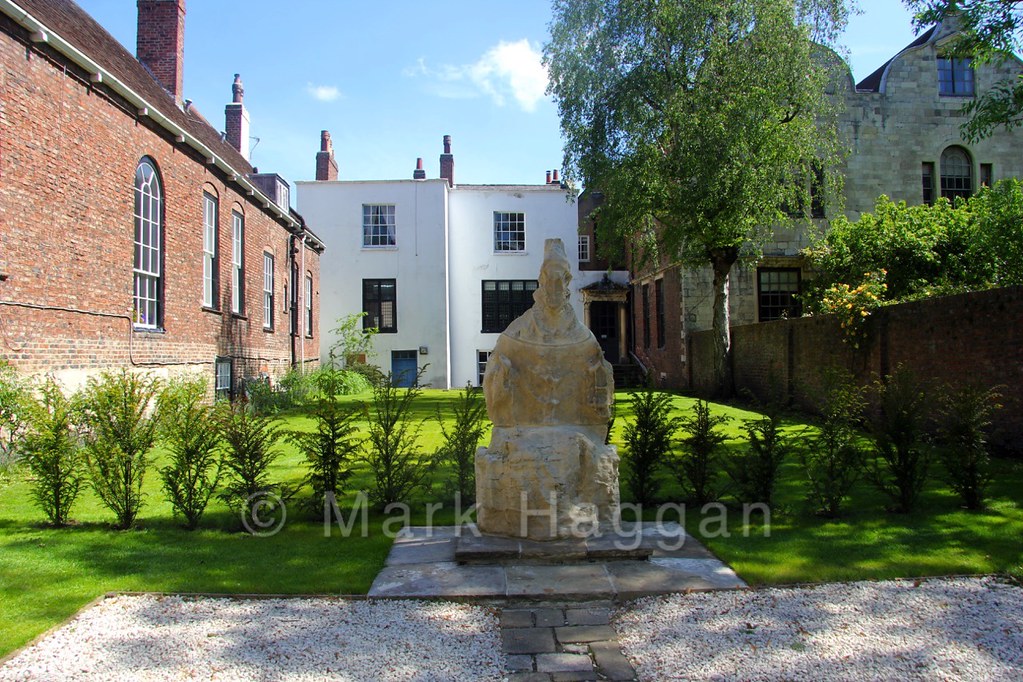 One of the buildings located beside the Minster, and which appears to be part of the cathedral complex, is actually a separate church, that of St Michael le Belfrey. This church, situated right beside its larger ecclesiastical neighbour, forms a parish with the also nearby St Cuthbert’s. One of the interesting points about St Michael le Belfry is that it was where Guy Fawkes, famous for his part in the Gunpowder Plot, was baptised before his later conversion to Catholicism. 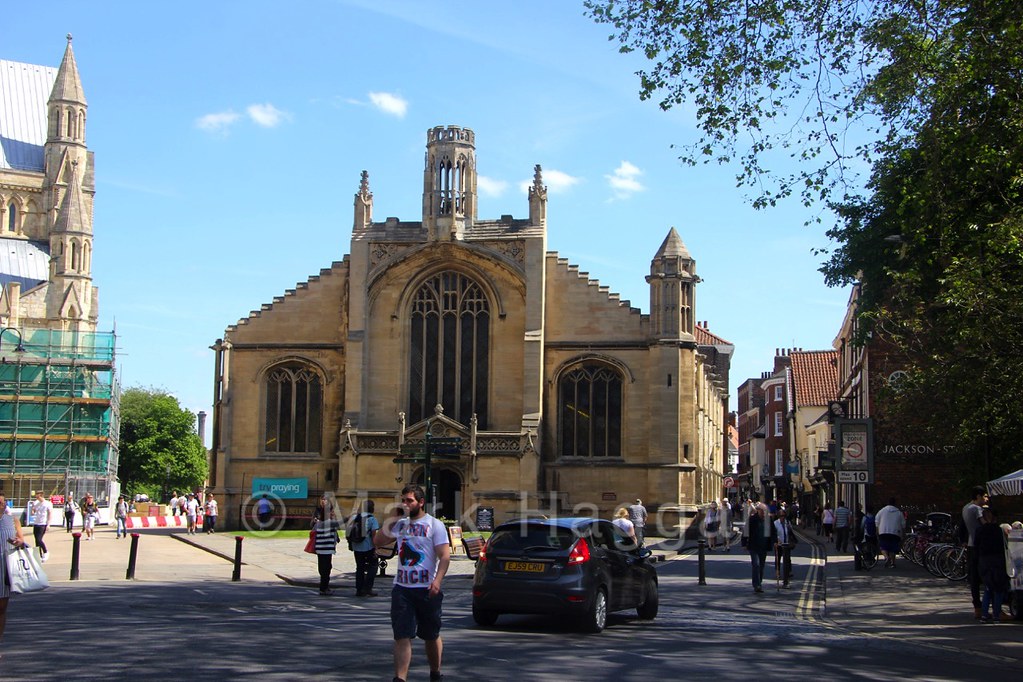 Two of the more interesting local residents are a pair of mating peregrine falcons who have made the Minster their home, and when we were there recently, they could be heard loudly announcing their presence, and had caused a small crowd to gather to watch them, even over the sound of a helicopter passing near by. 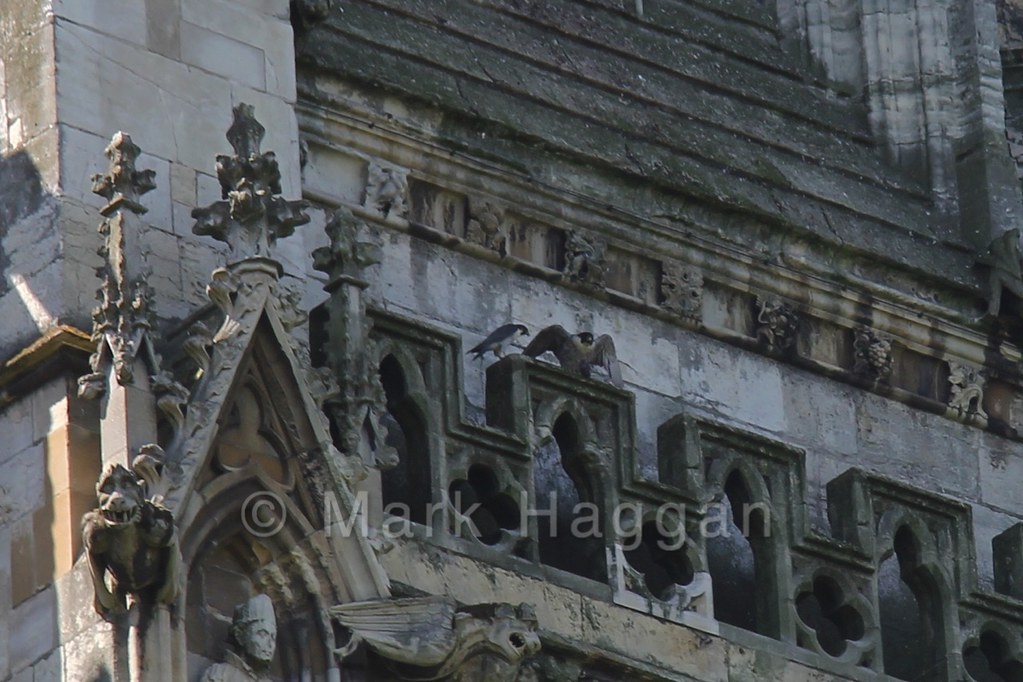 Lots of people gathered around York Minster listening to a large loud bird in the tower.

King Richard III, who was recently reinterred at Leicester after a funeral procession through Leicestershire, is famous for his York Connection – being Richard of York – and there was a campaign to have him buried at York Minster. There are plenty of references to Richard around the city, and near the Minster you can see the plaque that marks where he invested his son as Prince of Wales soon after he became King in 1483. 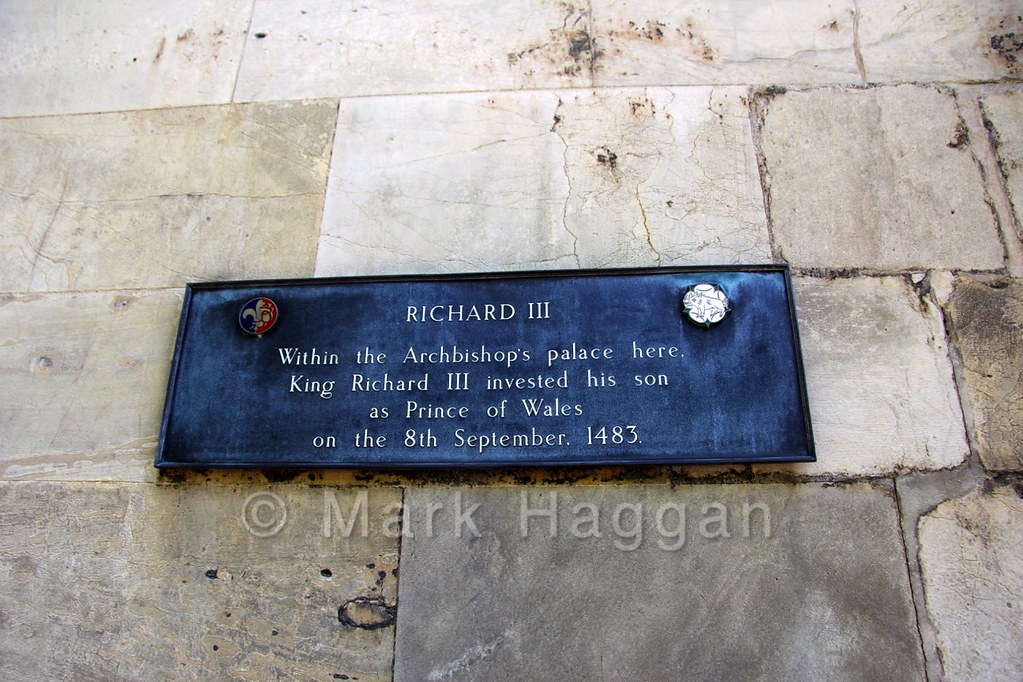 The view of the Minster can be seen across the skyline, and it is a majestic sight. If you find yourself in York, you cannot help but see York Minster, but do take the time to go and have a closer look. 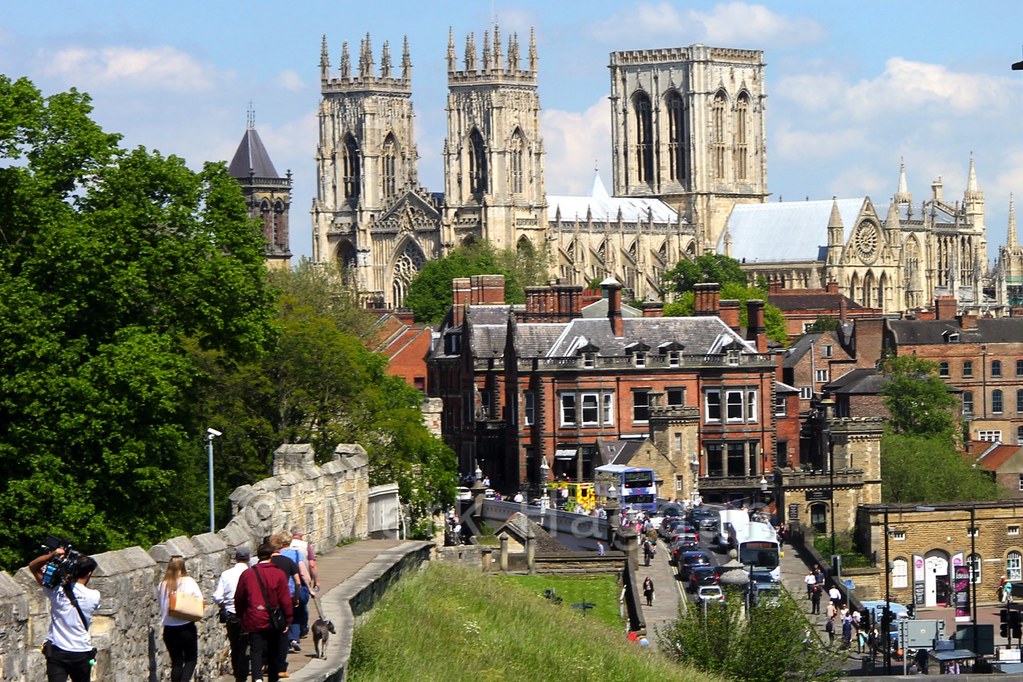