Belfast is a city famous for many things, and one of them that paled into the background until recent years was that it was where the ill-fated liner Titanic was built. This fact became more obvious again around the time of the 100h anniversary of the maiden and only voyage of the ship, in 2012. To coincide with this anniversary, the area where it was built became the site of a new tourist attraction, Titanic Belfast. I found myself at the site in May 2011, at the time that marked the 100th anniversary of the ship sailing out of harbour, if not at the time that marked its sinking almost a year later.

The ship was built in Belfast, but left to have its fit out completed, including the addition of its famous funnels. The staff of Harland & Wolff, the ship building company responsible for its construction, and still working in Belfast, lined Cave Hill, which overlooks the city, to see it sail down Belfast Lough. There is a saying about the ship in Belfast, “It was alright when it left here”, and that much is true.

I went to the Titanic Belfast exhibition in September 2012. It had good reviews, and I was curious as to what I would find there, but I had reservations about going for at least three reasons. Firstly, I knew the story of Titanic, and was not sure what would be new and interesting. Secondly, I suspected that this might be a bit cheesy, more like some of the more hysterical or melodramatic television and film versions of the story. Third, though, was that I was not sure that a maritime disaster that saw the loss of 1502 lives was the most appropriate topic for this sort of exhibition. Belfast has rediscovered its association with the ship, and there are numerous Titanic themed items across the city, many with a tenuous link to the ship. There is even a Thai restaurant called, you’ve guessed it, Thai Tanic. Really.

The building that has been purpose built for the exhibition resembles the front of the ship being built, and is a striking landmark in the city. 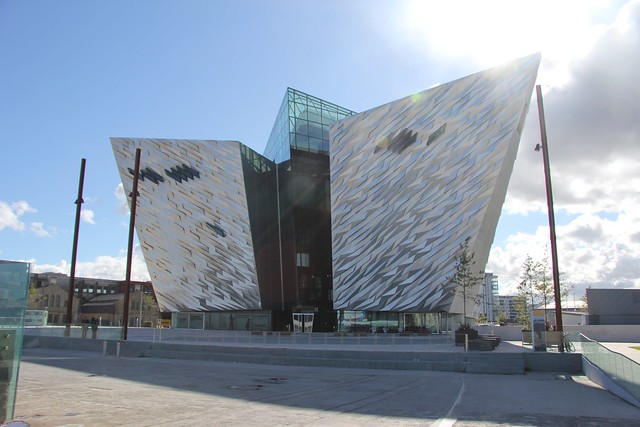 We went inside, to what is a huge series of galleries about the ship. I was relieved to find that there was much more than just the story of the sinking. Much of the exhibition was taken up with the story of the building of Titanic, including the socioeconomic and political environment which saw the birth of RMS Titanic. The ship was laid down on 31st March 1999, and sailed out of Belfast on 31st May 1911. This was during what has become to be called The Home Rule crisis, when the future rule of Ireland – then all part of the United Kingdom – was under consideration, and saw Northern Ireland born and the rise of Belfast as its capital.

This was explained through a series of interesting and interactive displays, that highlighted what was going on around the shipyard, and explained just how an important an employer Harland & Wolff was in the city. 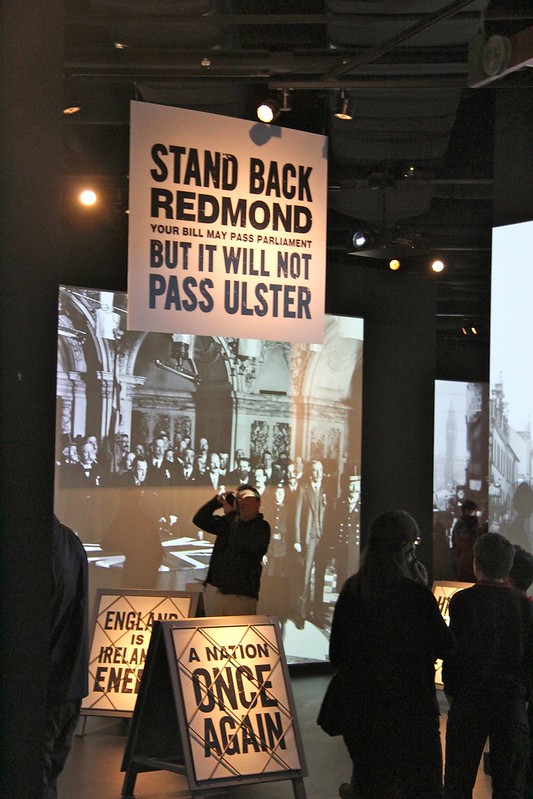 The story of shipping and the prevalence of the key shipping companies was also covered, and in a way that surprised and delighted. Adverts would come to life as the characters in them began to talk as you walked by. 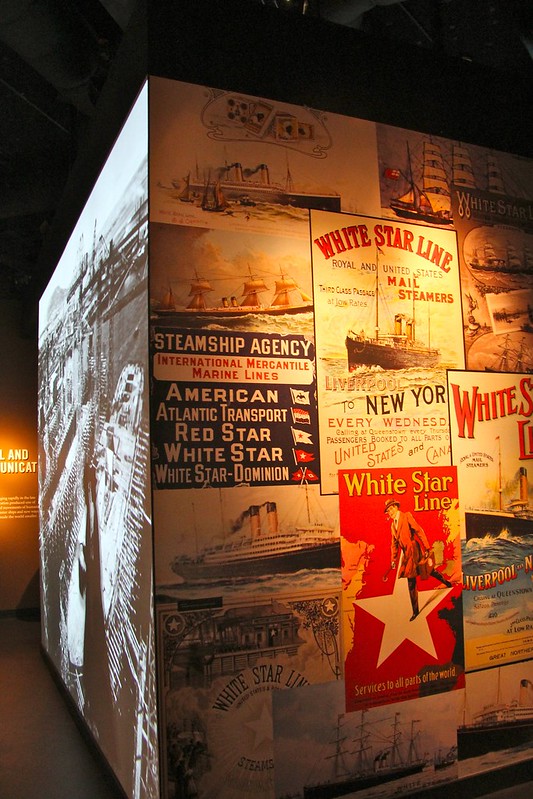 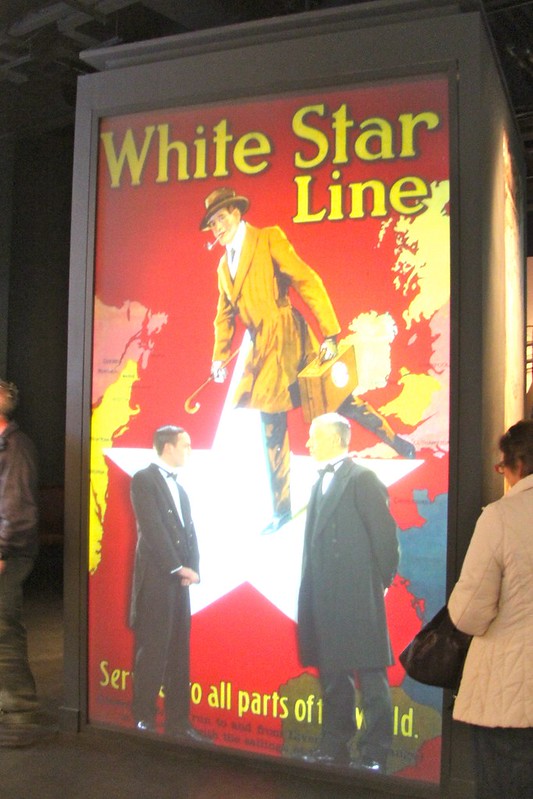 The story of the building of the ship included a ride that transported visitors through the sights and sounds of a shipyard from 100 years ago, complete with large video displays. 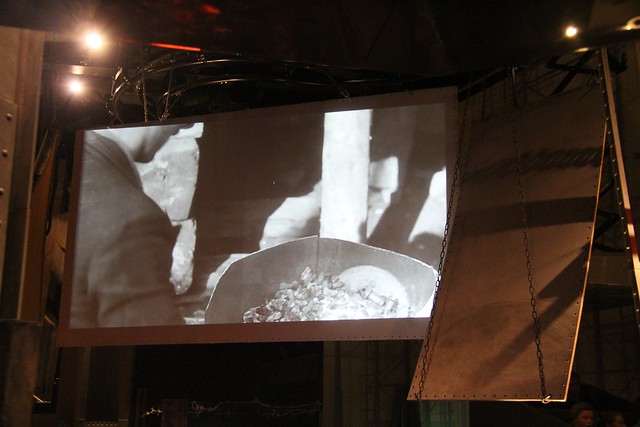 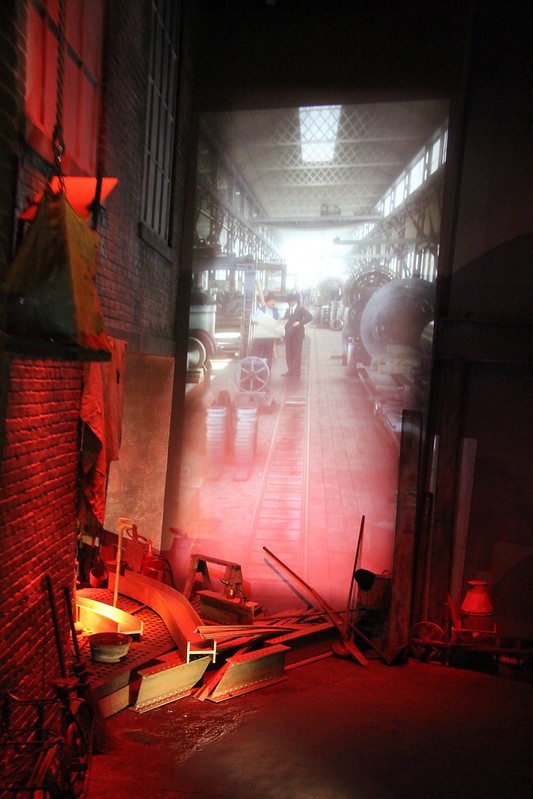 There was much coverage of the inside of Titanic, including mock ups of the various cabin types, and a rather excellent huge moving video display of what being on board the ship may have been like.

The building itself is impressive, and is designed to add to the feeling of the industrial nature of the city. 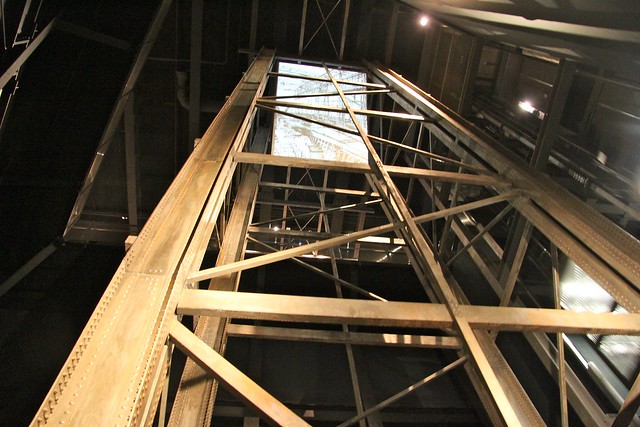 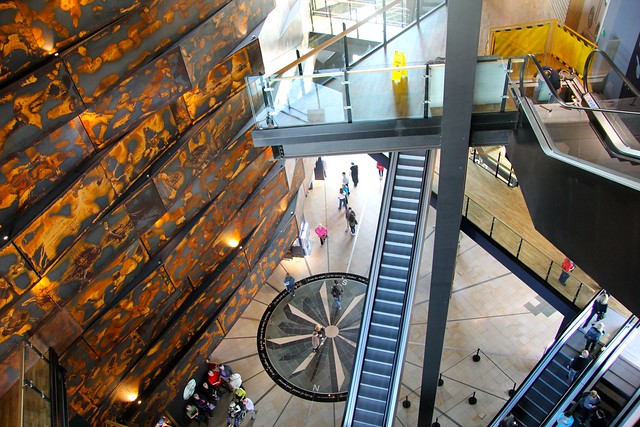 The exhibition is built at the shipyard where Titanic was built, and there is an excellent feature where the pictures that show some of the building open up to show the site as it is today. 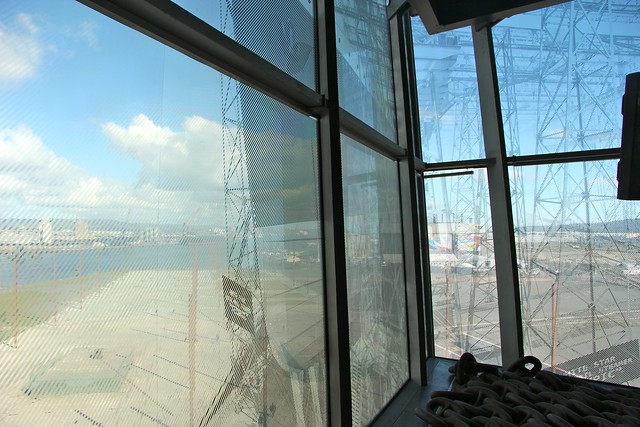 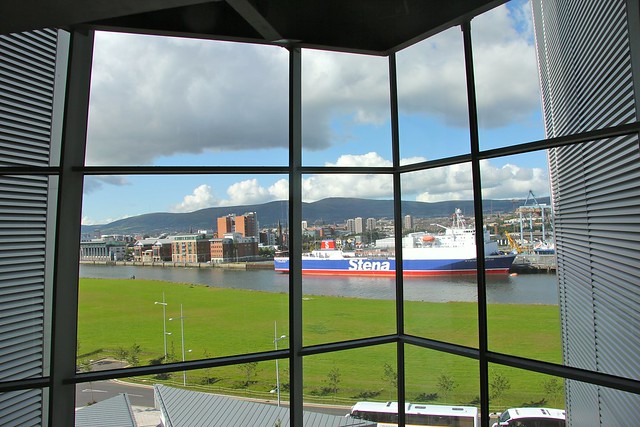 We continued through the story of the ship, including the excitement of its launch from Belfast, and then it sailing off from Southampton, via Cherbourg and Queenstown, for New York. The story of the sinking of the ship was thankfully done in a tasteful way, and the reading the messages sent actually managed to bring a tear to my eye in the way that none of the films about the topic could.

There was coverage of the Birkenhead Drill – “women and children first” – which was popularised by its use on Titanic, which saw 74% of the women on board and 52% of the children saved, but only 20% of the men.

We moved on to hear about the investigation into the sinking, what was learned, and how shipping has taken heed of the story of Titanic, and what has been done since for the safety of everyone. There was coverage of the stories of the myriad of conspiracy theories, from cursed Egyptian mummies in the hold, through the gold carried, to the story that it was all an insurance scam and the nameplate was simply changed for the sister ship, Olympic. Each of these myths was debunked with relevant facts.

The story of the aftermath included recreations of the lifeboats from the ship, and of the iconic cranes from Harland & Wolff that mark the shipyard to this day. 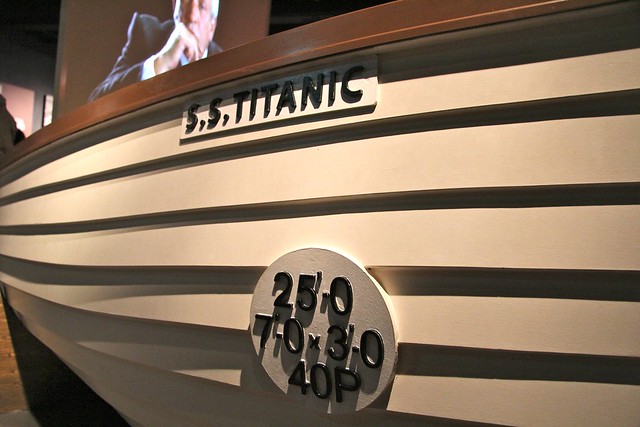 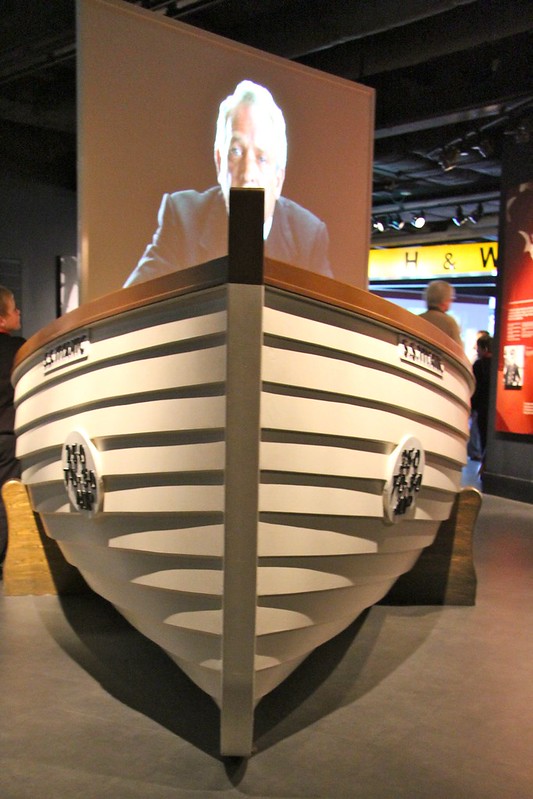 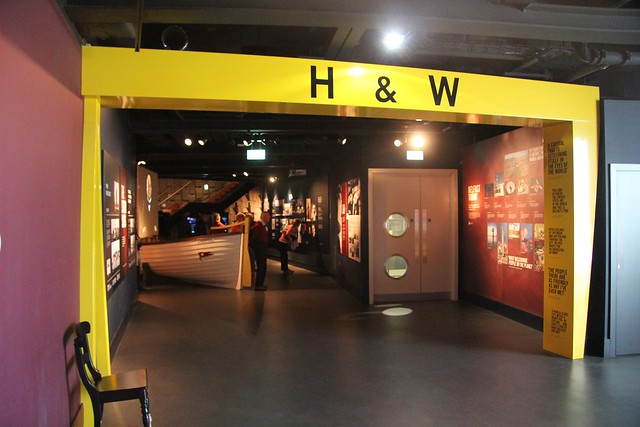 There were interactive parts of the display that allowed visitors to investigate various facts and stories, including the names of those who perished and those who survived the disaster, and the ability to analyse these in a way that allowed the visitor to explore the stories about the treatment of the different classes of passengers and crew on board, helping to show that it was not quite as simple a story as the fictional accounts would imply. It was interesting and slightly odd viewing, seeing familiar names on the list of crew. 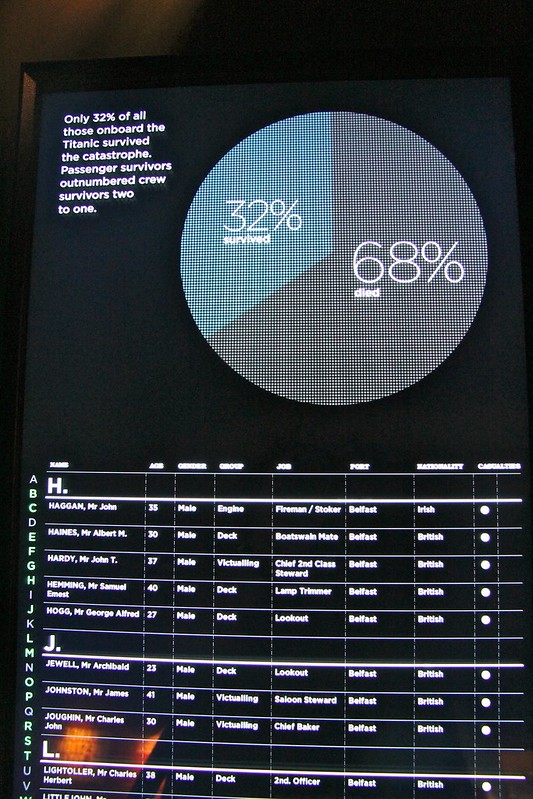 The wreck of the ship was discovered in 1985, and there has been much exploration of what remains at the bottom of the sea. This was also well covered, with interactive displays and videos highlighting how the remains of this once great liner now appear.

There was, of course, a gift shop selling everything that one could imagine onto which a Titanic logo could be added. There was even a Haynes manual for Titanic available. There is also a café that served a nice lunch.

As well as the various sights inside the building, the area around the exhibition also helps to tell the story of the ship. Standing outside Titanic Belfast, the scale of the ship is apparent from the large almost empty space that marks its birthplace, with girders in place to help get an idea of the size of the ship. 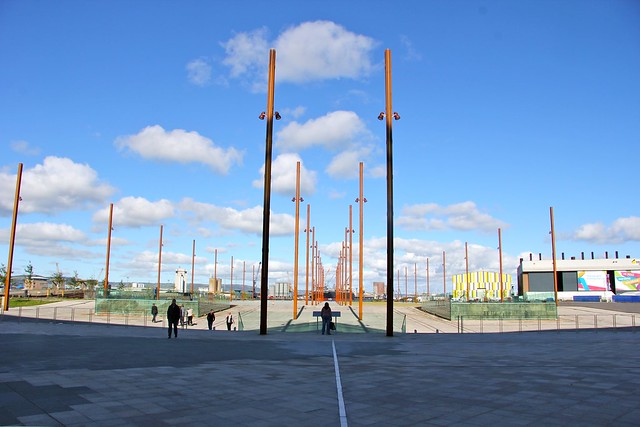 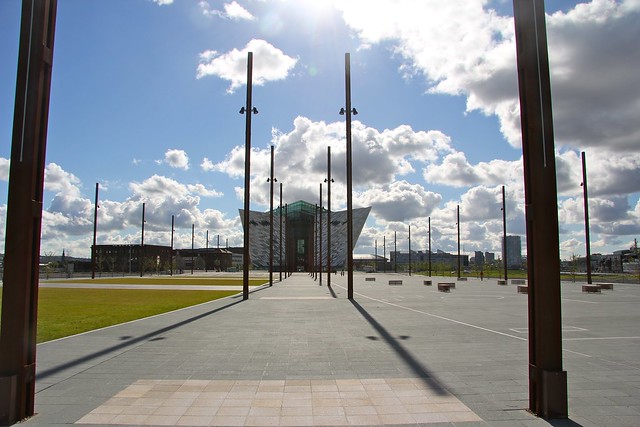 Across the way from Titanic Belfast are Titanic Studios, the former part of the shipbuilding infrastructure of the city that has become part of the new and growing local media scene, is evident, as are the mighty cranes of Harland and Wolff. Titanic Studios have seen the making of such films as City of Embers and television programmes as Game of Thrones, helping to make Northern Ireland in general, and Belfast in particular, home to a new industry, that of the media. 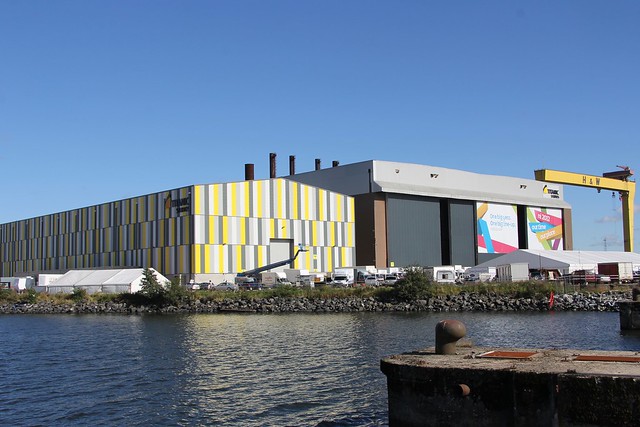 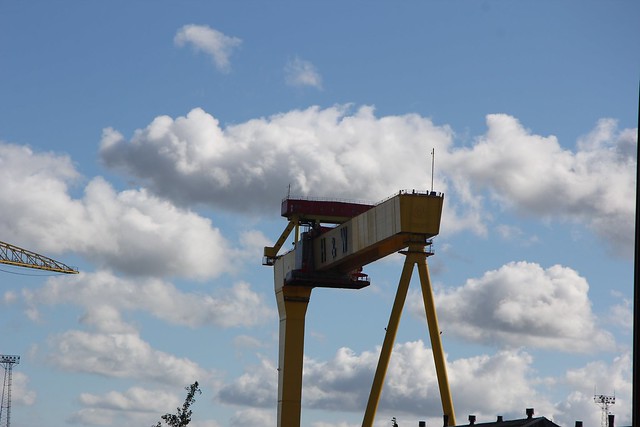 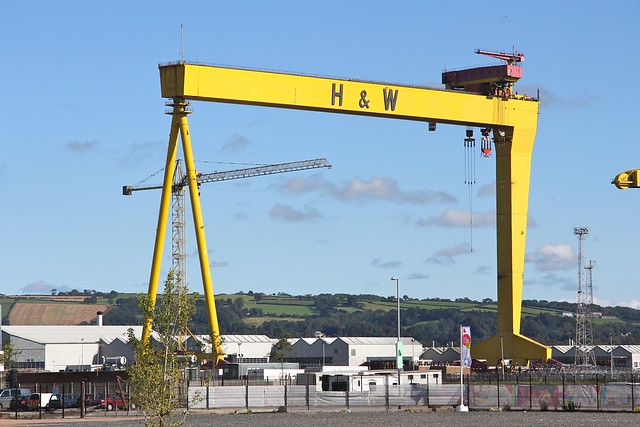 The cranes can be seen from quite a distance down Belfast Lough and even from as far away as Carrickfergus, down the coast of County Antrim. 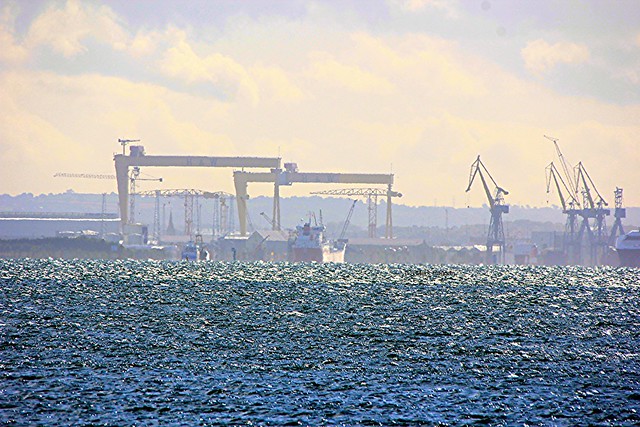 The area outside of Titanic Belfast also helped to track the development of shipbuilding in the city, and the canals and channels that were built to enhance the natural land formations that supported both shipbuilding and maritime based commerce in the city.

I actually really enjoyed my trip to Titanic Belfast, and can now understand why it is one of the most popular tourist attractions in Belfast. It deals with the tragedy in a sympathetic way, it covers the story of the ship from angles that might otherwise be ignored, and it uses the space available and modern technology to provide a visitor with a spectacular display if all of the information and history is not enough. I might even make a return trip to see what information I missed on my first trip.