I wrote yesterday about a trip to Crac de Chevaliers in Syria, and mentioned that I visited it on my way from Damascus to Aleppo. Sadly, both cities are in the news at the moment for the wrong reasons, as coverage of the conflict there is reported around the world. I was lucky enough to be there in happier times, and my experience is that the cities, like the region, were fascinating, interesting, historic and friendly places. 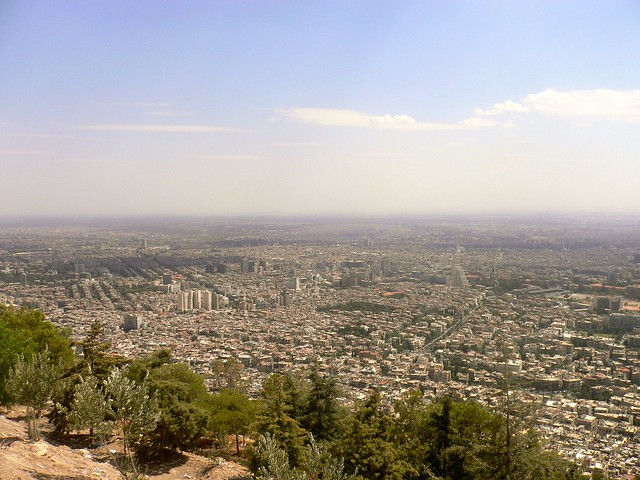 Damascus really is a stunning city. The name is believed to date back to the 15th century BC, and the city itself probably started around 6300BC, although settlements in the area date back further. It is mentioned in the book of Genesis. Understandably, then, the city is filled with historic sights, being one of the oldest inhabited places on earth. There are the regular tourist locations that you expect in a capital city, like the National Museum, which houses the most incredible antiquities from this country of ancient civilisation, including the first alphabet and various exhibits from the many cities excavated in Syria. There is also the old city, complete with the old souq, the impressive market place that is still in use. Just as you are there buying your modern groceries, you could easily imagine Sinbad or Aladdin passing through from Baghdad on their way to some adventure or other. 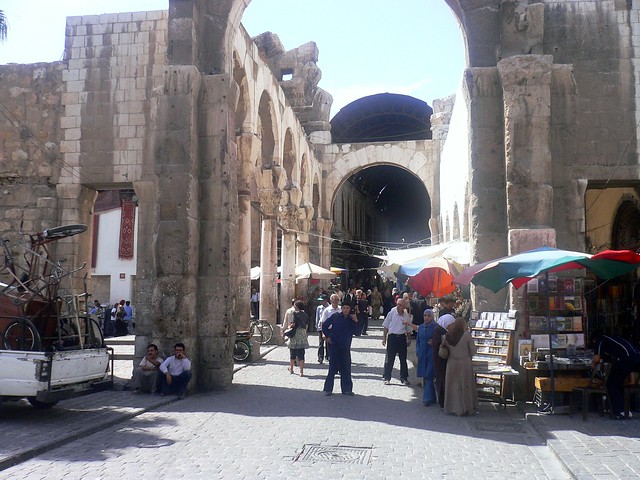 The city has religious connections, given its location and age. In the West, the term “The Road to Damascus” is commonly used for some sort of conversion in thought, named after the biblical story of the persecutor of early Christians, Saul, being struck down by God on the road to Damascus, and who had his sight restored in the city, where he became St Paul, not just a notable early Christian, but the author of much of the New Testament of the Christian bible. As well as the gate through which Paul escaped being in place – now the Chapel of St Paul – there is also the House of St Ananias, alleged to be the place where Ananias baptised Paul and his blindness was taken away.

Relatively nearby is the incredible Umayyad Mosque. I should say that I found this to be incredible not just because of the stunning architecture and impressive building, but by just how peaceful, tranquil and welcoming I found it to be. 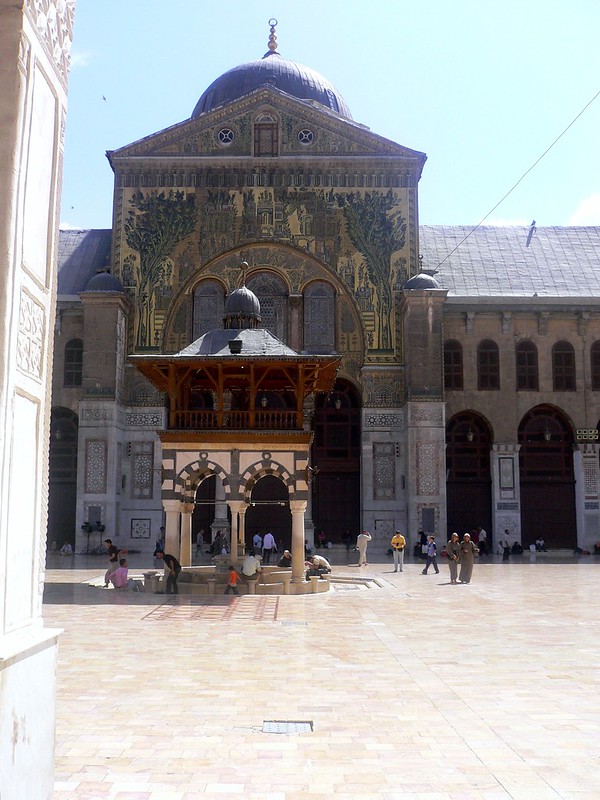 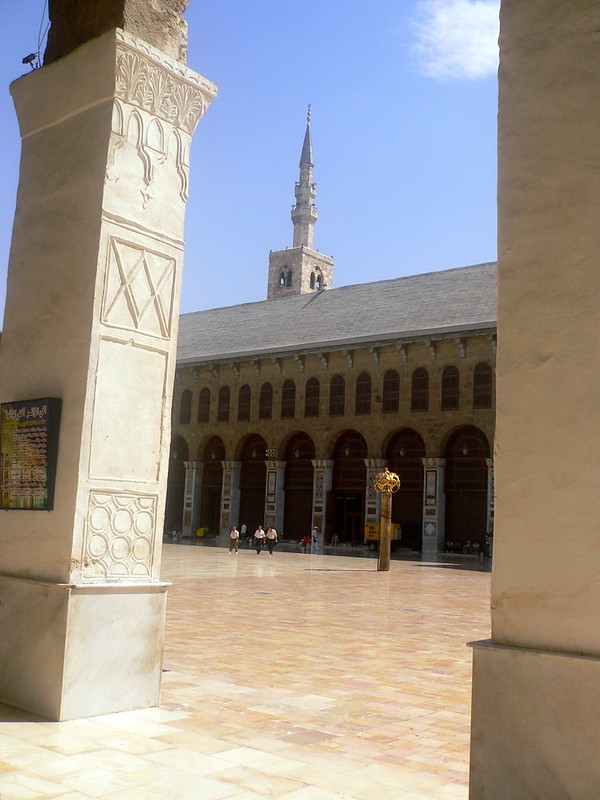 Near here is the Mausoleum of Saladin, or Salah ad Din. It was initially built in 1196, three years after Saladin’s death, by his son, Al Adil, and restored in 1898 through the patronage of German Emperor Wilhelm II.

We stayed in a beit, or traditional house, that had been converted to a hotel. Passing through the tiny streets of the old part of the city, barely wide enough for a car to pass and were replaced by golf buggies, we eventually came to a huge wooden door that looked uninviting and rather ancient. We knocked on the door, and it was opened to reveal a most wonderful hotel, with all of the modern conveniences that you might expect in a 21st century hotel anywhere in the world, with the added advantage of staying in such a historic place. The rooms were huge – I have stayed here more than once, and sampled more than one of the handful of rooms – and generally face out to the central courtyard around which the hotel is built. The middle of the courtyard features a swimming pool, and sitting around that having a leisurely breakfast was a great way to start the day. The quiet and cool alcoves for tea, coffee, baklava and sisha were welcome. 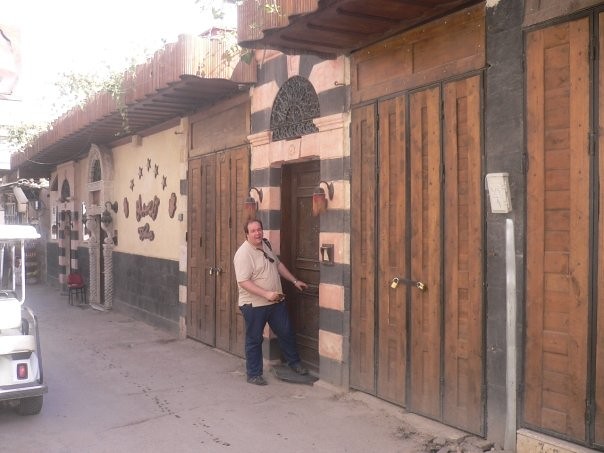 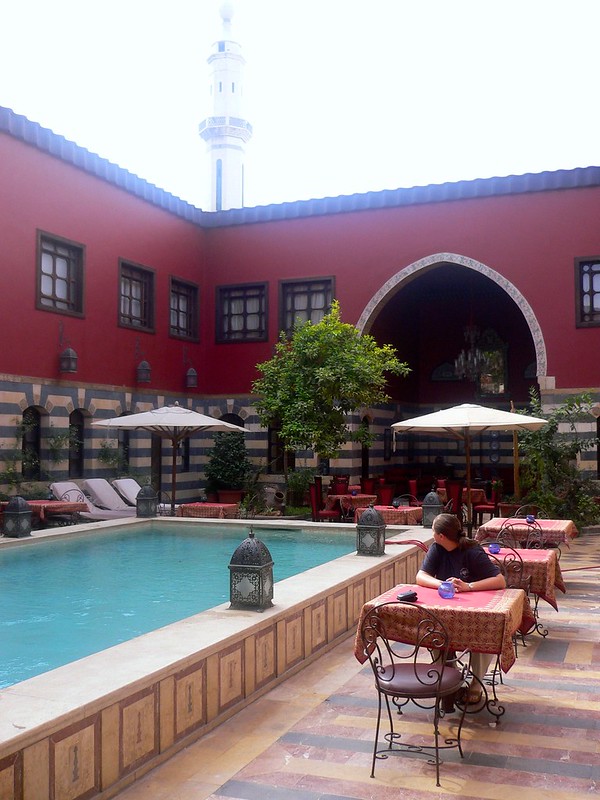 The hotel was also located very centrally, and although a large city, nothing was more than a few minutes’ walk away. A quick stroll took us through the temple of Jupiter and into the Souq, or in the other direction we would be at the House of St Ananais, or equally easily to the Mosque or the Mausoleum of Saladin, and the likes. Driving slightly out of the city allowed us to look down over this great metropolis.

When we left the city, we headed for Crac de Chevaliers, and off to Aleppo, to continue exploring Syria, although we did return to this fascinating city. It was an unusual feeling to see the ancient and the modern in such close proximity, sitting in a restaurant which was located in a building that dates back many centuries, whilst enjoying contemporary cuisine in a local style with trendy music playing, then walking back to the hotel through the tiny and ancient streets, passing locals listening to their ipods. The ancient city and its people has withstood the challenges of millennia of history, and often a turbulent and busy history given its location, and I do hope that the country’s current problems end soon.