I find myself – as I quite often do – in the little Spanish village of Els Poblets, near Denia, roughly half way between Alicante and Valencia. This was our base when attending the Grand Prix at Valencia a few years ago, and a frequent holiday destination for us. When walking through the village, we spotted that the local bar and restaurant called Quelcutti’s Tapas had undergone a bit of a transformation. It’s a little Spanish style eatery in a square in the village which comes complete with metal statues of a sheep, a goat and a donkey. I have no idea why.

In all my visits to Els Poblets, I had never eaten here, but have walked by it many times. On this visit, we decided to have dinner. One of the owners, Joe, came to talk to us in Spanish, and quickly moved to a cockney sounding native English accent. We were given menus in Spanish and English with a good range of tapas, including plenty that are not on the usual list you expect to find in tourist restaurants. There was no batatas bravas, but there were pork ribs in French onion sauce, for example. 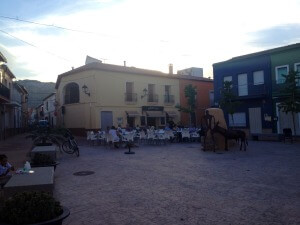 A bottle of wine and a series of tapas were ordered, both were excellent. The tapas were replenished, more than once. A big fuss was made of Xander, and he enjoyed exploring the square. He also enjoyed the ice cream and cheesecake, and when we were served a liqueur after our meal, he was given a little fruit flavoured shot so that he could join in. We had a lovely evening.

It transpires that part of the reason behind the transformation of Quelcutti’s was a recent visit by Gordon Ramsey, the chef as famous for his television transformation programmes as his cooking. A new series called Gordon’s Costa Nightmares, or something similar, starts soon and an episode will feature Quelcutti’s Tapas.

The food was excellent, and remarkably well priced. The staff were great, and could not have been more friendly or helpful. If you find yourself in the area, it’s certainly worth a visit.