Anyone who has spent any time in Scotland will know that you do not have to travel far to find a castle, or at least a fortified building, and I have visited several and stayed in a few. However, I recently visited one that was slightly different from any other to which I had been. Caerlaverock Castle, on the southern coast of Scotland not far from Dumfries, is triangular in shape, making it rather unusual.

The castle is located not far off the busy A75 road that links the M6 with the ferry ports of Stranraer and Cairnryan, and a road with which I am very familiar, but for some reason, I had never previously taken the few miles of a detour to visit the castle. I’m glad that I did this time.

The castle is on the edge of the Caerlaverock National Nature Reserve, meaning that although it is only a few miles from a major road, it feels like it is in the middle of nowhere – in a good way – with a surrounding of trees and the sound of birds singing, even on the damp day on which we visited. The castle has an imposing look, and although in ruins, is still in good enough shape to give a good idea of what the completed building must have been like.

My dog Berta was with me, and as usual, she enjoyed exploring the ruins of the once-great fortress.

Caerlaverock Castle dates from the thirteenth century, and featured in many of the historic incidents that shaped the history of Scotland, through until the seventeenth century when damage to the castle was not repaired, and it slowly fell into the state in which we now find it.

The entrance to the castle, over a moat, is still guarded by a pair of canon.

Once inside the castle, there is plenty to explore, as although in ruins, there is much of the structure remaining, which means that there is the opportunity to view the castle both from inside rooms, and from upstairs.


There are plenty of windows in place that give a good view over the local landscape.

This was not the first castle in the area, and a few hundred metres walk through the surrounding woodland takes you to the site of the square castle that pre-dated the current triangular fort. Only the foundations remain, with a bridge crossing an empty moat, but they show the difference in size and scale of this building and that which we can see now.

Berta enjoyed the trip through the trees and undergrowth to get between the old and new – or rather, old and even older – castles.

On the way between the two, we found this log that had moss growing on it, and to me looked like either a lion or a dragon that might be celebrating Chinese New Year. Perhaps it’s just me…

One of the best reasons to walk the short distance to the old castle, though, is for the view of the ruins as you walk back towards the visitors’ centre. 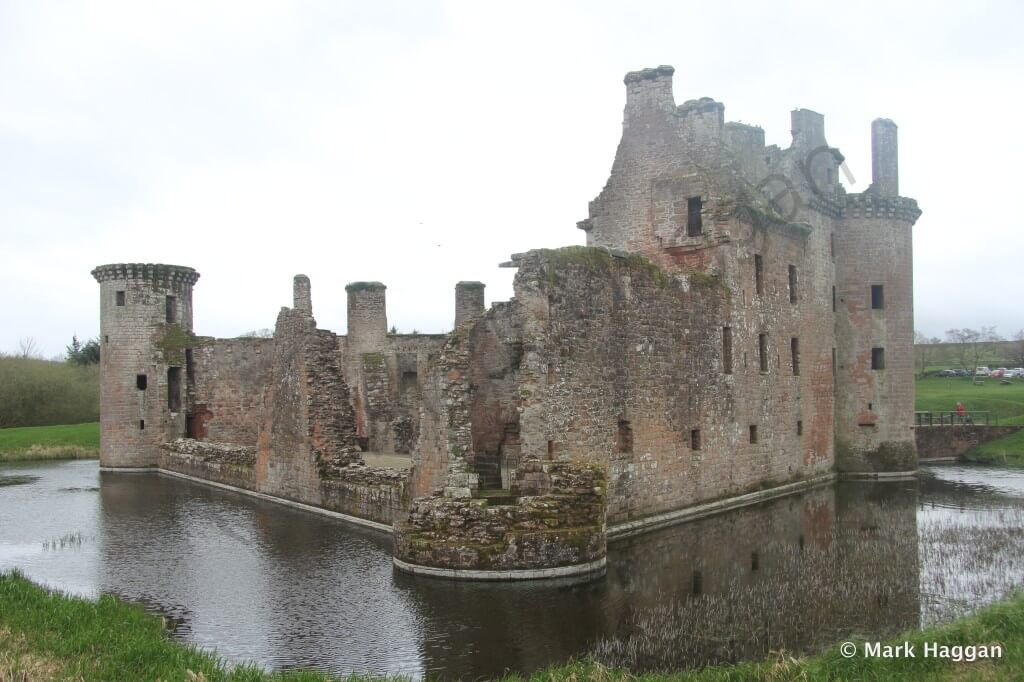 The view of Caerlaverock Castle from the grounds

We stayed to have a very tasty lunch in the visitors’ centre, where the staff were very helpful. The view is rather impressive.

Caerlaverock Castle is certainly worth a visit.