I spent a rather excellent evening yesterday (11th November 2013) at the ATP World Tour Finals, and in fact the final of the ATP World Tour Finals.  The event takes place in the O2, what used to be called the Millennium Dome, and features the top eight singles players and doubles players of the ATP rankings.
The evening started with the final of the doubles, with Bob and Mike Bryan, the US twin brothers who have had a particularly successful year, up against the Spanish pairing of Fernando Verdasco and David Marrero.  It was a close match – the format is two sets, and a tie breaker if that results in one set each – with Verdasco and Marrero edging it 7-5 6-7 (3-7) 10-7. 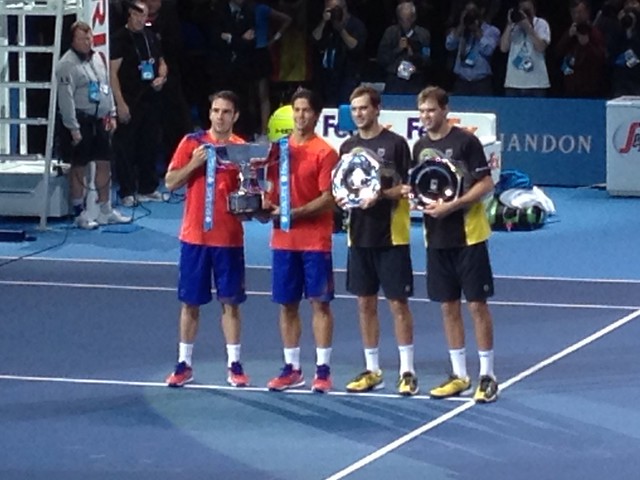 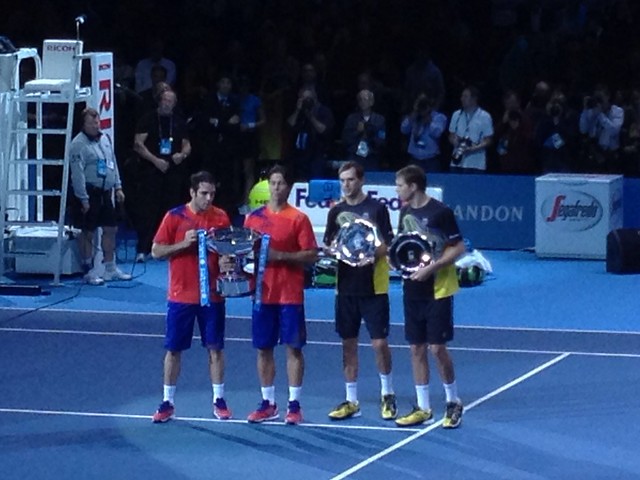 After the presentation of the trophies, it was time for the singles final, and no doubt the many travelling Spanish fans were hoping for a double celebration with Mallorca’s Rafael Nadal playing against the defending champion, Serbia’s Novak Djokovic.  I was lucky enough to have a good seat for the match, and got a good view of the action, although my photography was limited to my iphone, and I made a point of not taking in pictures during play, limiting it to warm ups.  I had managed to turn the flash off, but I still wanted to make sure that I wasn’t causing any flashes at an inappropriate time.  I hope that you can at least vaguely recognise the players from some of the pictures.  There were plenty of fellow audience members who seemed to attract plenty of attention including one of the One Direction lads, and a series of footballers including Ronaldo and Jack Wilshere. 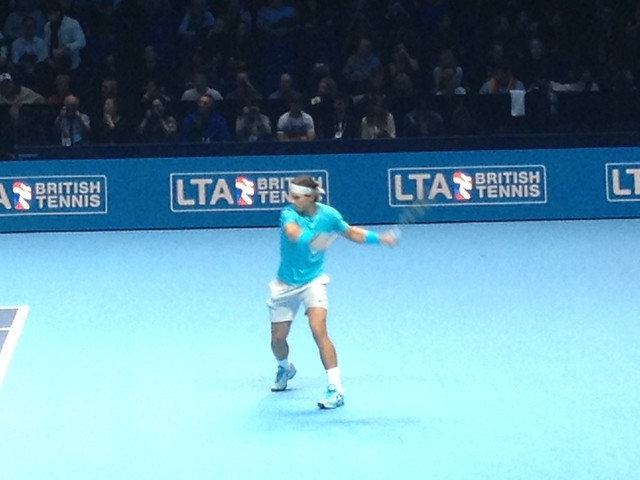 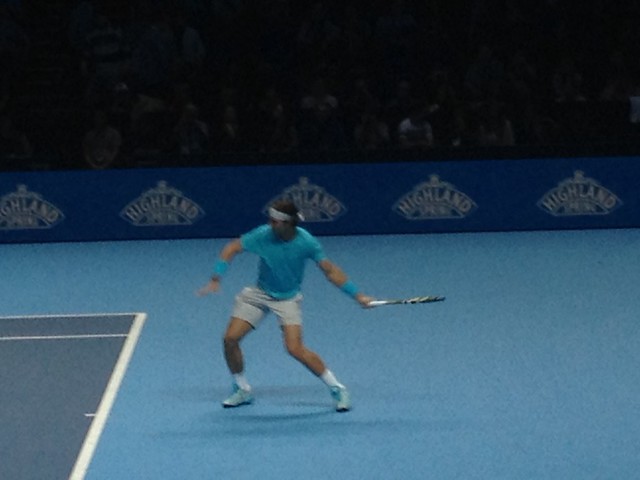 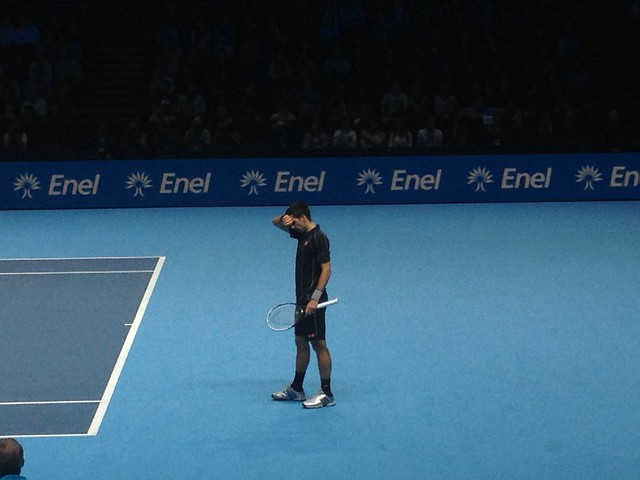 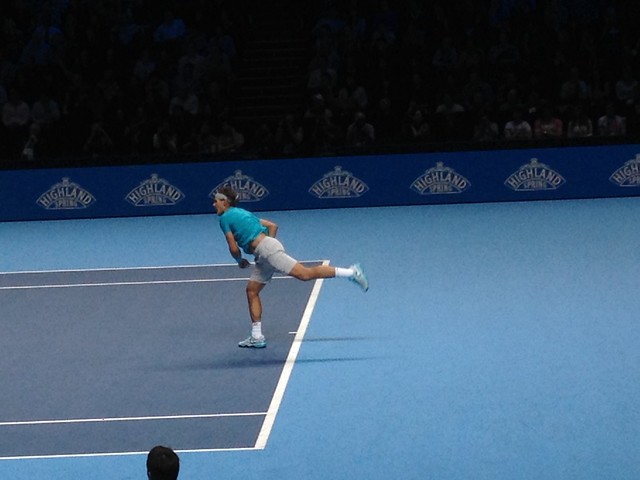 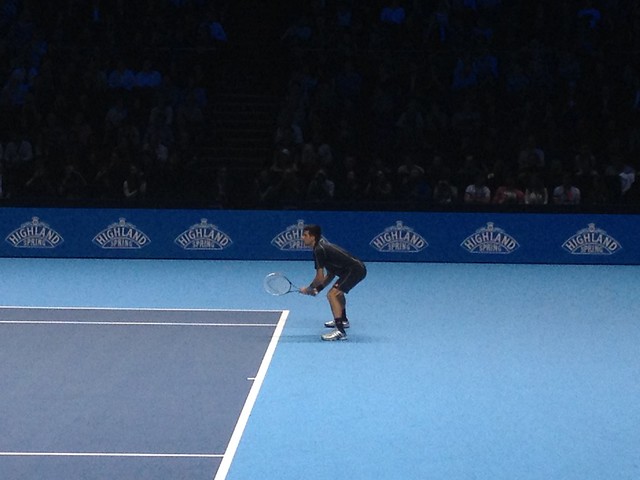 It was a great match, with some great rallies, however, from the first game, Djokovic was in the ascendency.  He went three games up, only for Nadal to break back to 2-3.  Djokovic finally won the set 6-3.  Djokovic was soon 3-1 in the second set, and his run of form continued.  He had his first championship point when 5-3 up, which Nadal recovered, to hold his service game. However, the reprieve was short lived with Djokovic taking the second set 6-4.  His win included some particularly impressive shots, like this:

I have to say, though, much as I’m impressed by Djokovic’s tennis, his karaoke attempts are also worth watching.

The evening finished with the presentation of the trophies, including the trophy being renamed in honour of the late Brad Drewett, the ATP Chairman who died in May 2013. The runner up trophy was presented to Nadal, and then with some fireworks – as much as could be used indoors – and a ticker tape display, Djokovic was presented with his trophy and a bottle of champagne. 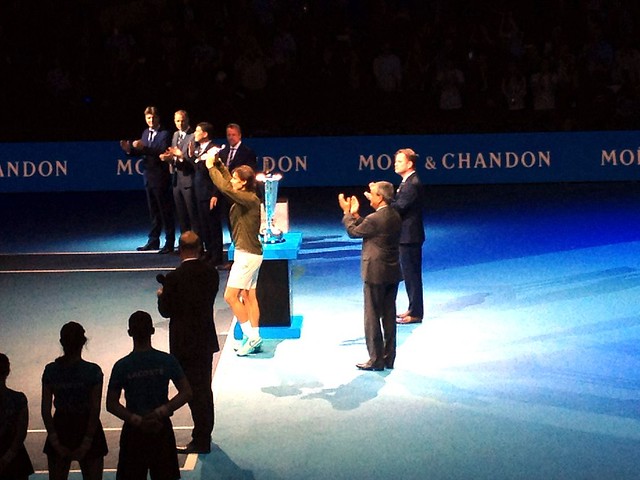 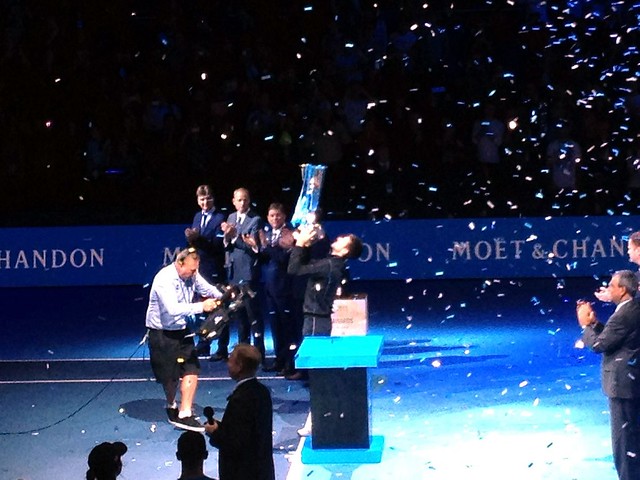 It was a tremendously entertaining night, very much enjoyed.  The O2 will hold the 2014 and 2015 tournaments, so if you are in the area, it’s certainly worth a visit.