As you may be aware, the O2 in London is currently home to Monty Python Almost Live, an apparently final reunion show for the five remaining members of that comedy troupe who were at the vanguard of an alternative humour through their Flying Circus television programme from 1969 until 1974, and then through films like The Meaning of Life, The Life of Brian, and Monty Python And The Quest for the Holy Grail. The show opened to mixed reviews, and I was lucky enough to go along on the third night.

For those who have been to the O2 – the venue housed in the building that looks like a huge tent that was originally the Millennium Dome – you will be aware of just how huge this venue is, and how many people are needed to fill it. You can also understand, I’m sure, how much odder this seems with a smattering of fancy dress from the audience, with characters from the Pythons’ most famous sketches having a drink before the show. There were Roman dignitaries, plenty of members of the Gumby clan complete with knotted hankies, and even several versions of three chaps in red cardinal uniforms, including one with a flying helmet.  We bumped into one such trio sitting having a coffee. I have to say, I wasn’t expecting the Spanish Inquisition. 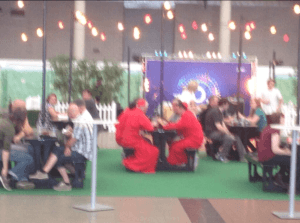 A poor shot of the Spanish Inquisition

When the time came to enter the arena, I was delighted to find that we had good seats, near the front, with a good view. Given the huge size of the O2, it is possible to have a seat far from the stage with a view that requires binoculars, so being at the front was a pleasant surprise. The tickets were a birthday present from my wife, a very good choice!

The staff who were selling ice creams and popcorn before the show started were repeatedly asked if they had any albatross, and I suspect that they had already become used to this.

I took the obligatory photo of the stage before the curtain went up, whilst the orchestra were playing. The stage looked like a classic theatre, with an almost cartoon style. Eventually, the show started to huge applause, and the Pythons took to the stage. One of the strap lines of the show was “one down, five to go”, referring to Graham Chapman, who died in 1989. Although his presence may have been missed on stage, he was there in some of the various videos that made up part of the show, with some of the classic sketches being played on big screens. The team were also joined by an absolutely fantastic chorus of singers and dancers for the various musical numbers, who sang, dance, and kicked their way in a very entertaining fashion through the show. There was plenty of need for their talents, and they appeared regularly. I suspect they may have actually spent more time on stage than any of the individual Pythons.  There were some other special guests, both on video and on stage. On the evening I was there, Bill Bailey appeared, and Stephen Fry was the guest on the opening night. 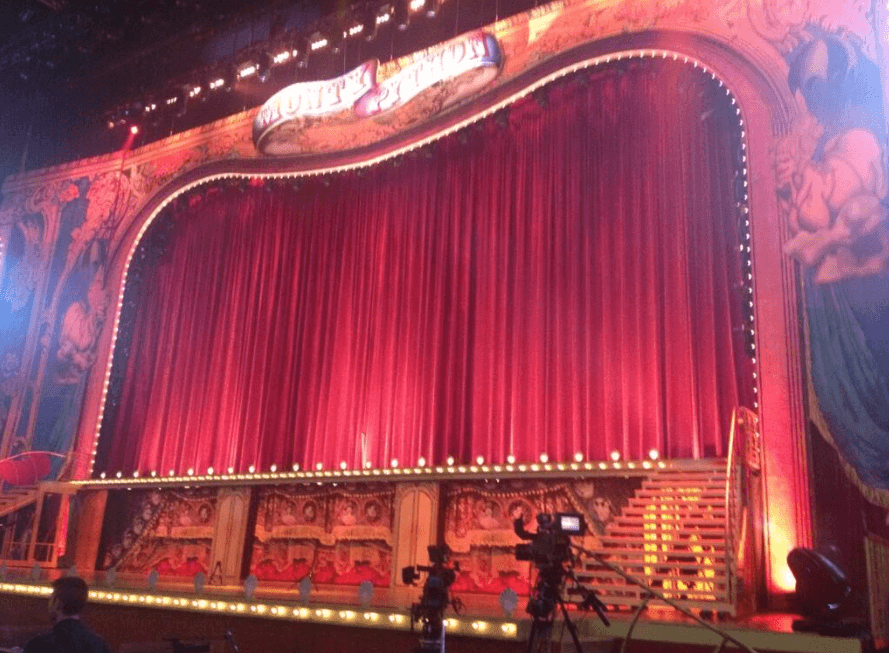 The opening sequence included each of the Pythons appearing on stage with a “Photograph Opportunity” caption, and people were taking photos throughout the show. I, however, was too busy enjoying watching it and laughing along to stop to take any pictures once the curtain opened.

We were treated to live versions of some of the classic sketches, like The Yorkshiremen, Dead Parrot, The Cheese Shop, The Philosophers’ Song, The Lumberjack Song, and Argument.  Most of these sketches have aged remarkably well, and even though most of the audience could recite the sketches word for word, possibly more seamlessly than at least some of the Pythons, they went down remarkably well.

There were also video highlights from the shows, and I was pleased to see some of my favourites, like International Philosophy, the 1972 Munich Games, and the classic Fish Slapping Dance.

The show was not without its quirks; Terry Jones seemed to have forgotten plenty of the words, and it was an effort for John Cleese not to chortle his was through the show – who could blame him? – but oddly, this seemed to add rather than detract from the enjoyment. When the evening came to an end with a rousing version of Always Look On The Bright Side Of Life (yes, Terry Jones seemed to be reading the words even for that), the audience appeared to have been happy to stay for much longer, and I had laughed my way through a bit more than two and a half hours. My wife, who is not a Python fan, surprised herself not just by how much she  enjoyed the show, but also by how much of it she knew. The Spam Cafe, The Spanish Inquisition and plenty of the songs were surprisingly familiar to her.

I loved it, and would happily watch it again.  It continues at the O2 until the 20th July, when it is broadcast live as apparently the last ever Python show. If you are reading this after that date, then no doubt it is available for purchase on DVD, download, and just about every other medium.  If you get a chance to see it, do. It’s not often that you get a chance to see comedians who have influenced the development on comedy quite as much as the Pythons, and it was notable how fresh some of it seemed now, relative to some more recent shows that have aged less well.

I said at the beginning that the show opened to mixed reviews. I can only assume that some of the less positive feedback came from reviewers who did not get Python, or who expected a fully live show with no video or animations. There was very little new material, which was great. This was the comedy equivalent of a band’s greatest hits tour.  The chorus did make plenty of appearances, but they were entertaining and a key part of the show.  For me, this was a five star performance.