Ten years ago, I went to the Malaysian Grand Prix on a bit of a whim. It was the same weekend as my wife’s birthday, and a couple of weeks before that, we thought it might be fun to go to Kuala Lumpur (KL) for the weekend and go to the Grand Prix. It was a remarkably good value trip, although we did only go for race day itself. One of the reasons that it was such good value was that not only were the tickets for the race itself somewhat cheaper than any of the European events, but it was during the SARS outbreak, when flights to South East Asia were remarkably cheap because of concerns about illness. Although we booked relatively last minute, to fly out the Thursday evening before the race and the morning of the Monday afterwards – peak flights, you would imagine – we got the flights for about £240 each. Our trip was also cost effective as we were staying with a friend in KL. On recent previous trips at time, we had stayed in hotels, and Pete suggested that we stayed with him instead, so we availed ourselves of this offer. Pete also offered to buy the tickets for us.

When we arrived, the whole city of KL seemed to be F1 mad for the weekend. Shopping malls had F1 cars in them, the streets had F1 related goods for sale in every market and street stall, and there were all sorts of F1 related activity around the city. We had been to KL a few times before, so were quite happy to spend time with our friends and not rush off to be tourists, much as it is a fun and fascinating city to visit. Given that we were staying with Pete, we only went to the race on the Sunday, so that we could spend some time with him whilst we were there. On Saturday night, we headed off to a party in Bangsar, which was filled with all sorts of trendy people, and us. We were talking to many of Pete’s friends, and there was a standard conversation that went along the lines of
“Are you going to the F1 tomorrow?”
“Haven’t decided yet, depends when I get up”.

This amazed me. Going to a Grand Prix – and it’s going to the Grand Prix, not going to the F1 – in the UK or in Europe requires not only buying a ticket in advance, but also planning to get there. Normally you know weeks and months before the event if you are going. I normally buy my ticket for the British Grand Prix on the day of the race the previous year. These people had not bought a ticket on the previous day. It was signs of a sport with growing interest in the area, and as the price made attending very accessible, it was a very different crowd than what you might expect at most Grands Prix.

On the day of the race, Pete’s girlfriend was driving us to Sepang, where the race was being held, rather than the very good public transport option, which was to get the very swift airport shuttle train, and a connecting free bus to the nearby circuit. Our plan to get there early was being thwarted by Pete not being quite ready, and we all tried our best not to look too stressed as the minutes ticked by. Eventually, we headed off, and got stuck in traffic en route, but managed to get parked and heading off to the race in enough time. In the car on the way to Sepang, we paid Pete for our tickets. I thought he had made a mistake in the exchange rate, but no, it really did cost £9 per person. That’s right. It was less than a tenner per person, albeit for a general admission ticket, but a Grand Prix for less than the cost of most support races in the UK.

As we got close to the circuit, Pete realized that he had left something in the car, and headed back to get it. We were convinced that he we would miss the action, and carried on without him, hoping that we would find each other. As we were going through the last fence, he appeared on the back of circuit moped, looking the least stressed of any of us. We walked through, and found that the area to which we had access was a huge hill, and although there were other people there, it was far from being packed. There were great panoramas around about a third of the track. Some of the people near us were carrying anti-war banners, as this was four days after the invasion of Iraq, or rather, the start of the air war before the ground invasion. I had a few interesting travels around this time. The following weekend, I found myself in Tripoli, Libya, were the invasion was also top news. That is, of course, another story.

I should add that I had a relatively basic film camera that was not the easiest with which to take pictures of fast moving cars, so the pictures below are pretty rubbish. Less pretty and more rubbish. One of the other pieces of equipment that was useful was an umbrella. It was not raining, but it was very hot. Umbrellas were being used around us as parasols, and for many, having a picnic on the grassy slopes in the sun was as much part of the experience as the action on track. I did not see many large television screens to replay the action, and did not find any local radio that would keep us up to date on what was going on. It was – of course- hard to hear the track speakers over the noise of the racing. 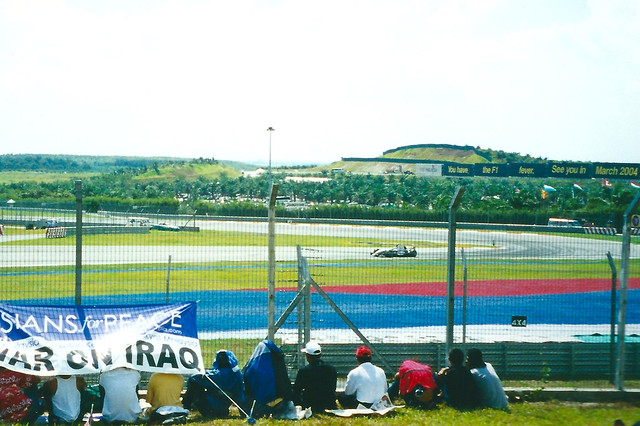 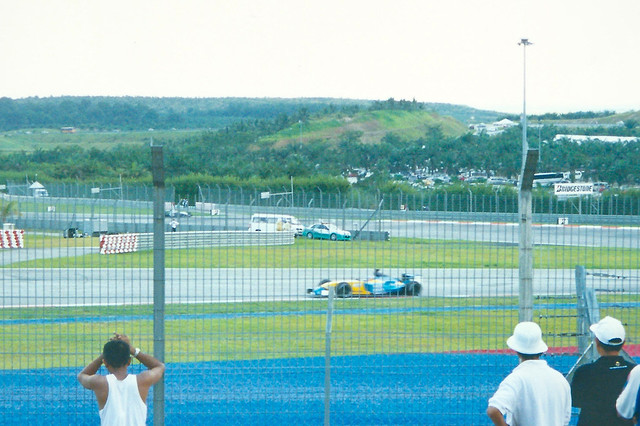 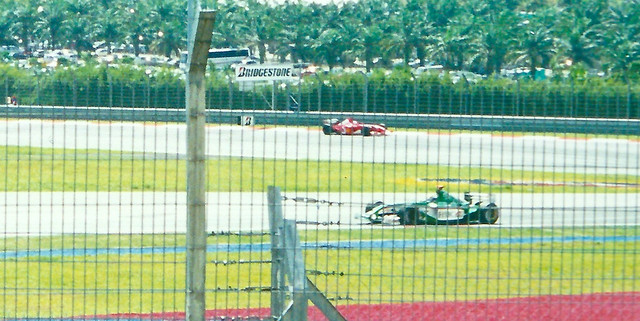 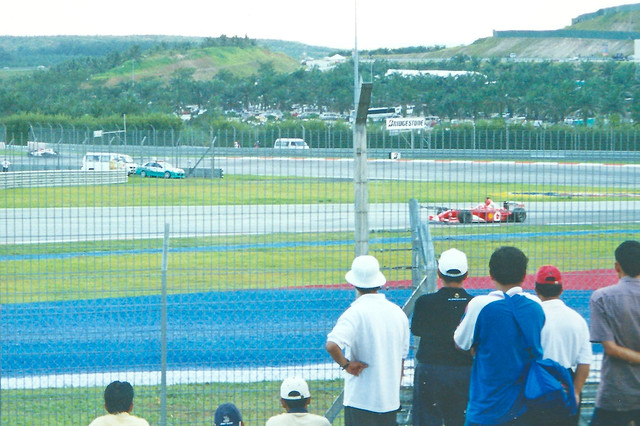 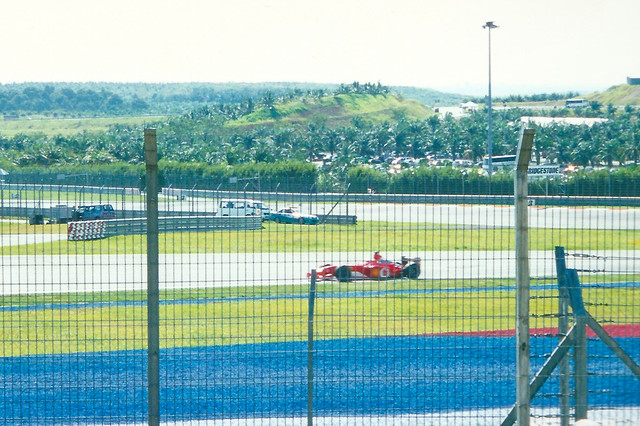 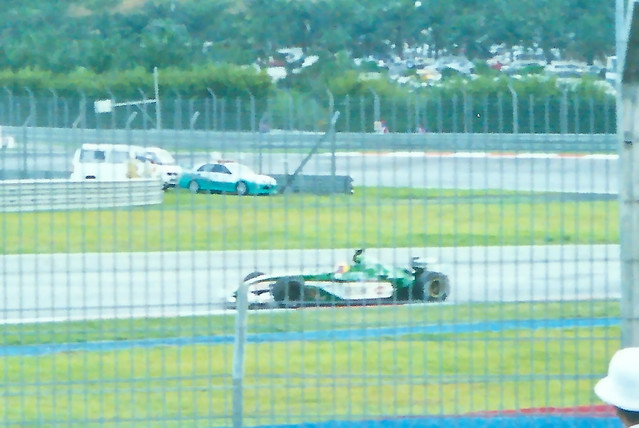 It was an interesting race. There was a young Spanish driver called Fernando Alonso Diaz on is first pole position of his Formula One career. It was his first year as a Renualt driver, having had a drive for Minardi two years before, and serving out 2002 as the test driver for Benetton – before it became Renualt –and then replacing Jenson Button in 2003. Although he was a relatively new driver, it was already clear that he had talent. The championship leader was British Driver David Coulthard, who, alongside Jenson Button and Justin Wilson, were the three British entrants, with English born Ralph Firman racing under his Irish citizenship.

Fernando did not have it all his own way, and the race was eventually won by another relatively new driver who obviously had talent, Kimi Raikonnen. It was Kimi’s first Formula One win, and with Alonso in third place, the other man on the podium, the experienced Rubens Barrichello, remarked that Raikkonen and Alonso would be future world champions. He was, of course, right.

After the race, there was good access to all of the circuit including a central area with hospitality, bars and shops selling the usual Formula One memorabilia. I suspect that sales may be somewhat lower than at other events given that all of the stalls on the streets and in the markets in advance of the event were filled with merchandise that was a mix of very cheap replicas, or cheap seconds. You could get a cap for about £1 and a top for between £5 and £10, and that was the higher cost seconds rather than the really cheap option.

We waited there for a while – Pete’s girlfriend had left before the end of the race – before heading back to the city. We thought that the crowds may have dispersed by then. They had not. If you have witnessed the very long buy orderly queues after a British Grand Prix waiting for the shuttle buses back to the park and ride, then the similarity was that there was a large number of buses waiting and there was a Grand Prix. The queue was very different style. As the door of each bus opened, there was a scramble to get on. I started off in my very British way trying to be ordered and polite. Three or four buses left without us. I then pushed my way on to the next bus in the same style as everyone else. Being a relatively large chap, this was not too much of a problem.

The bus shuttled us over to airport, and we got the KLIA Ekspres – the fast train – back into the city. It’s a great service, and takes passengers on the 35 or 40 mile trip in just under half an hour. The modern train service cost around £5 or £6. That was about two thirds of the cost of the admission ticket, which really put its affordability into perspective for me.

After a night out in the city, we headed back on the train to the airport the next day for our lunchtime flight. The plane was not full, but a significant number of our fellow passengers were wearing all sorts of replica and genuine team clothing. It did feel a little like an F1 charter on the way back to Heathrow.

We had a great time at the Grand Prix. It was a fantastic event, well organised, and filled the city with the buzz and excitement that is normally reserved just for the circuit. Even looking back now, though, the thing that really strikes me is just how good value the event was. £240 for the flight, £9 for the ticket, £5 to get back from the circuit. With relatively cheap food in the city, I suspect we probably spent at most £300 for the weekend. That was obviously kept low by using the very kind hospitality of my friend Pete, but even with paying for a hotel, it would have been a great value weekend.

If you do decide to go to the Malaysian Grand Prix, try to include time to see the city – it’s a wonderful place – with the mix of modern and old, and also some of the nearby attractions, like the Batu caves, only a handful of miles from KL. Formula One is a great reason to go to Kuala Lumpur, but enjoying the sights and experiences of this great city is a fantastic benefit of attending.