My last post brought us up to the end of the day at the circuit on Friday, at Hockenheim for the German Grand Prix. The rest of the evening was fun, made up of a nice dinner in a lovely square in nearby Mannheim before heading to the equally picturesque university where we almost ended up in the middle of a baroque recital. A long story…

A sumptuous and leisurely breakfast was followed by another logistically well planned & executed journey to the circuit. The sun was even stronger than Friday, and many of the crowd were sheltering under the covered parts of the stands, making some of the sessions look not well attended. I can assure you, there were plenty of people there.

Free Practice Three saw the Formula One cars take to the circuit, before the big event of the day: qualifying. The crowd – including us – braved the sun, and watched as he driver made it onto the circuit. Sadly, Lewis Hamilton’s session was only to last ten minutes, with a heavy crash related to brakes.

The next session was the GP2 race, an exciting event that saw another win from Mitch Evans. All three drivers seemed happy on their way to the podium.

As you may be aware, I am the fan blogger for McLaren this weekend, so I thought I should make my way over to the pen where the drivers appear for the media, and see what was going on. It was good to see that Lewis looked well after his accident.

There were plenty of others to be seen in the paddock, including Rob Smedley congratulating Valtteri Bottas on a great qualifying performance.

I did have a chat with a couple of chaps about all sorts of things. That may well inspire some blog posts… 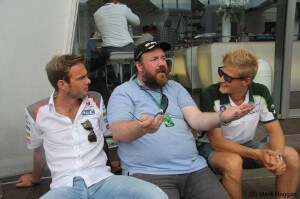 Giedo van der Garde, Marcus Ericsson and me at the 2014 German Grand Prix