The phrase “an early start” means different things to different people, but I’m sure that most people would agree a three o’clock constitutes an early start. That was the time that my alarm went off yesterday morning, and as I headed off at 0330, I checked – again – that I had my ticket with me, and felt a couple of spots of rain. Three minutes later, the thunder and lightning started, which illuminated my journey all the way to Heathrow, where the sun was rising when I arrived a bit before 0530 this morning. A quick trip on the pod from the car park – the very cool transports that feel very Sci Fi as they whisk you to the terminal – and I was through security, and met up with the others with whom I was heading to Hockenheim for the German Grand Prix. Our motor racing excitement must have been obvious, as we met two others from our flight and on their way to Hockenheim too. Even more excitingly, Sarah and Becky were off to their first Grand Prix. A wonderfully exciting proposition.

Our growing band found a remarkably friendly chap at the travel centre in the train station at Frankfurt airport who talked us through our various ticket options, group fares, and multi travel deals, before we settled on an option and headed off. A few adventures on the train, including a transfer, and we found ourselves in Hockenheim Hauptbanhof.  We came out to look for a shuttle to the circuit, and it was waiting for us. We got on, it left pretty much straight away, and whisked us to the circuit. Our scheduled landing time was 0945, and at 1210, we were at the circuit. That’s less than two and a half hours, which we found very impressive. 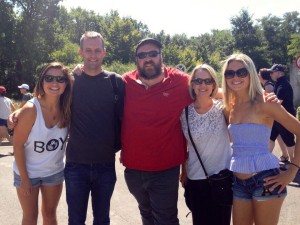 We had missed FP1 – we knew that would be the case – but did get there in time for some GP2 action, and of course for FP2. We went our seats, and found ourselves opposite the pit exit, and with a wonderful panoramic view. There was plenty to watch in FP2, not least the Caterhams, where an oil issue brought Ericsson to a stop just outside our view, and then Kobayashi’s car caught fire. Dramatic stuff.

Marcus Ericsson was well supported, with plenty of Swedish flags to be seen around the circuit.

When the session neared its end, we went on a tour of the circuit, which we interrupted to watch some of the qualifying session for GP2. With an air temperature of 33 degrees and a track temperature reported as 56 degrees, the stop to watch was very welcome.

The Porsches came out as we continued on our tour, before getting back to the start. We headed back to where the shuttle bus had dropped us, and there was a bus about to depart. The driver spotted us, and stopped, waiting for us to get on board. Half way back, he stopped again beside some people walking back to the station and picked them up too. What a gent!

At the train station, we got on a train pretty much straight away, and in a few minutes had reached our base for the weekend.