Day Two at Formula One Winter Testing in Jerez was certainly busier than Day One. The teams seemed to have used the time on Tuesday to get the cars in a better position to go out on Wednesday, making for a busier track. I arrived at the circuit in Jerez early in the morning, and the Caterham team were already hard at work, using lights to illuminate their tyre work. 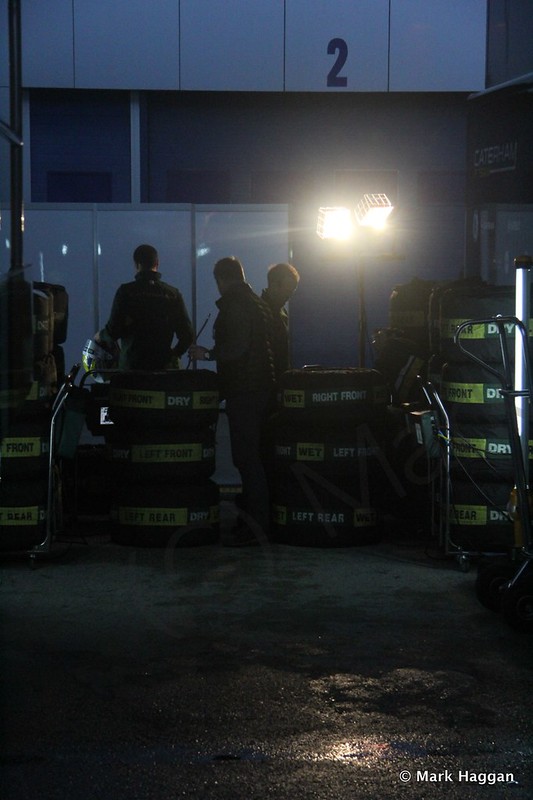 The media were also there early, looking cold in a damp paddock that had yet to see the sun that day. 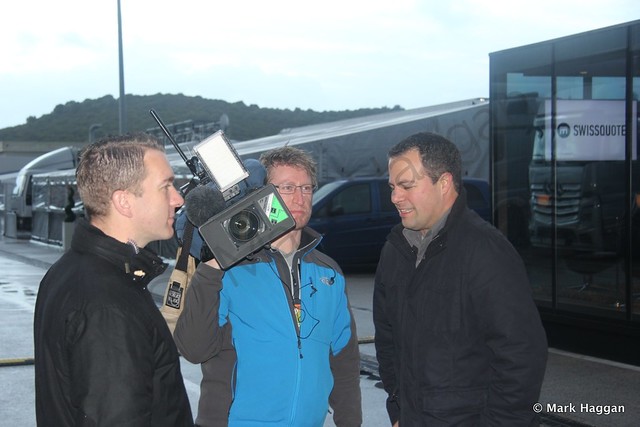 Some of the drivers were already to be seen before the track was open, preparing for the day. 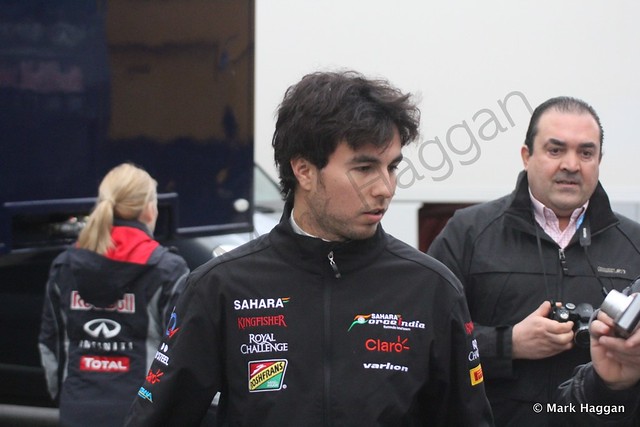 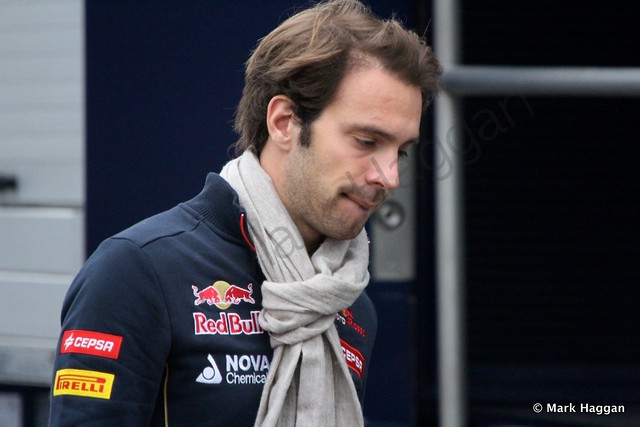 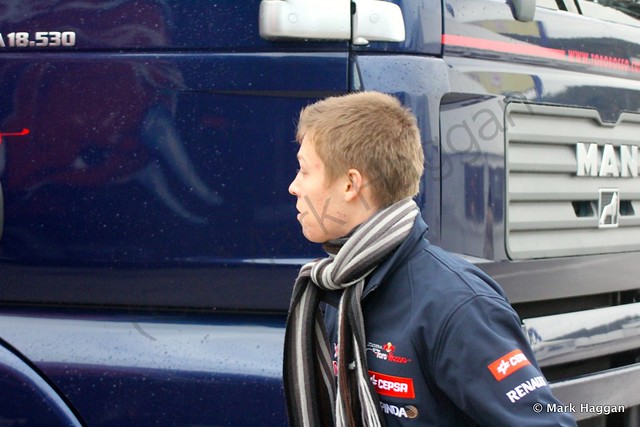 However, the circuit was soon live and cars were out in more numbers than the day before, and doing more laps. 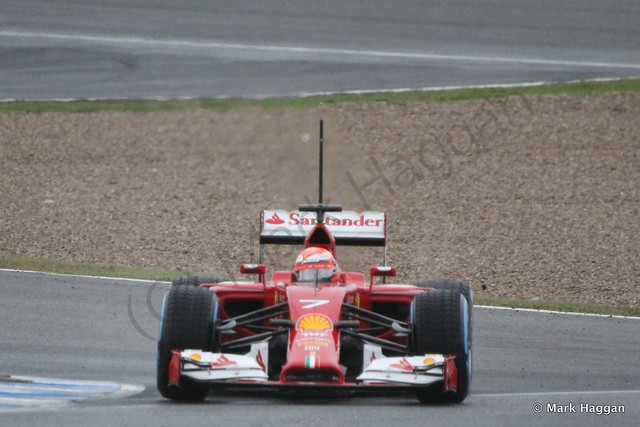 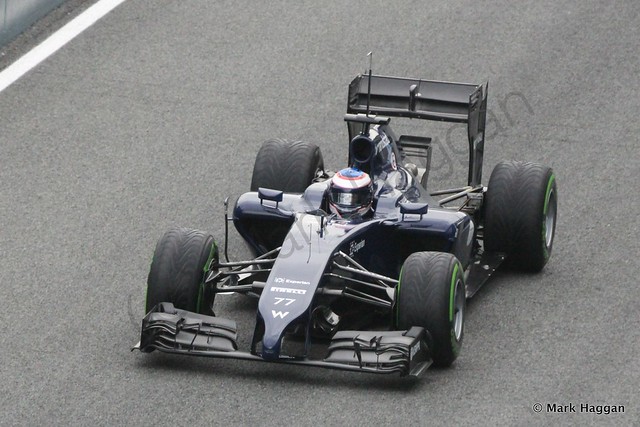 The Red Bull, which was notable by its almost absence the day before, was on track soon. 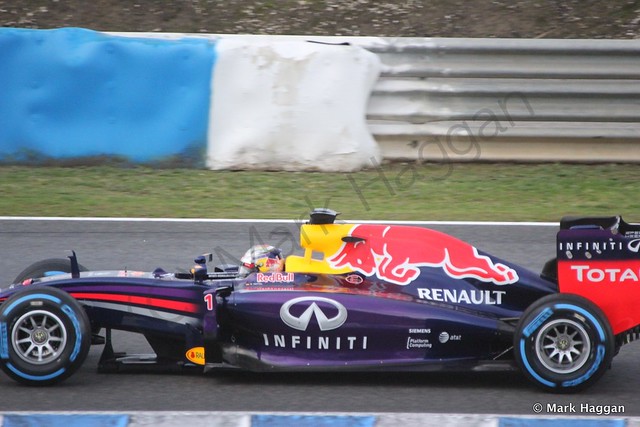 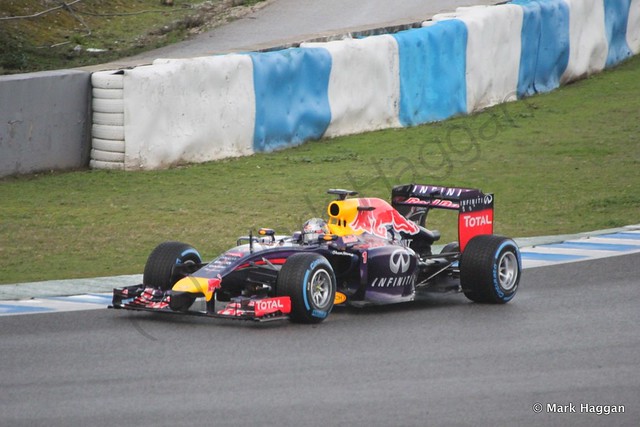 Jenson Button was also out in his McLaren, which had not appeared the previous day. 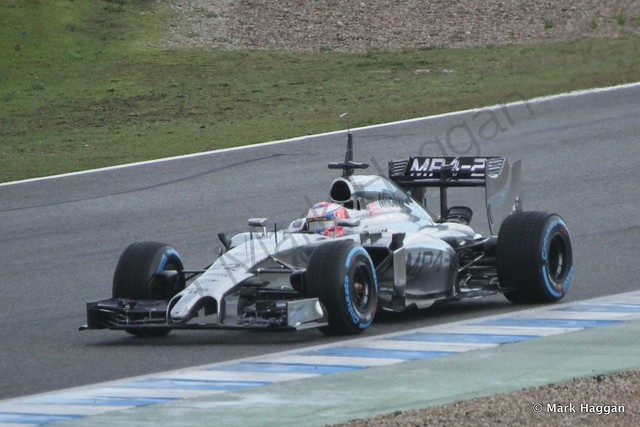 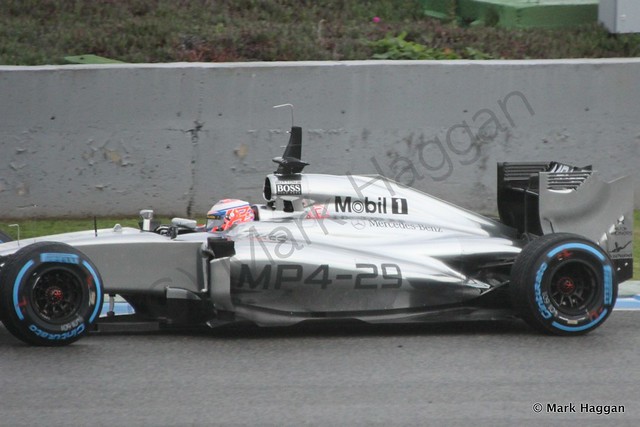 Some of the fans were clearly pleased to see Jenson. 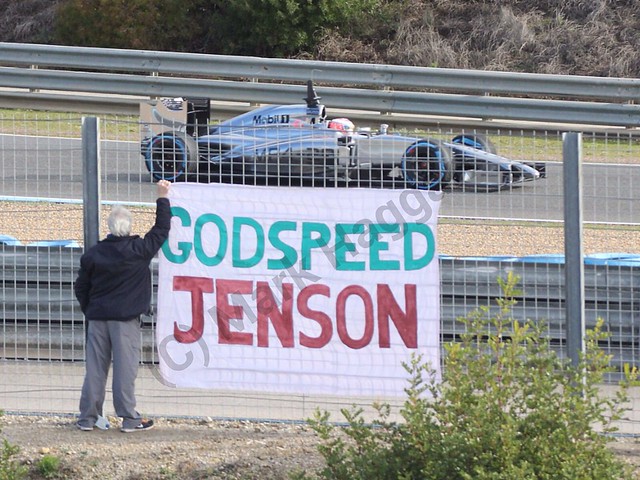 I went to the top of the pit building, and watched the cars from there. The height gave a good view of the cars coming down the pit lane below. 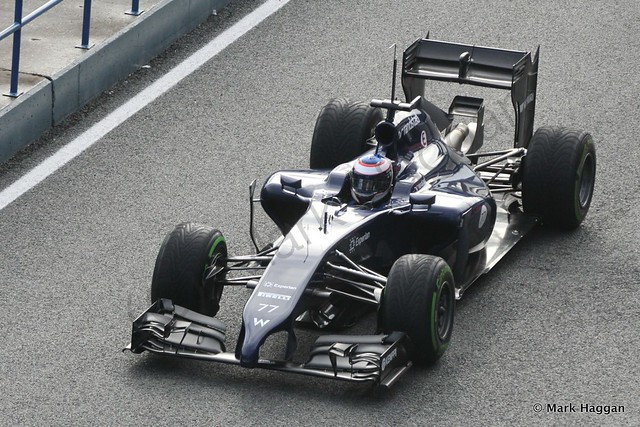 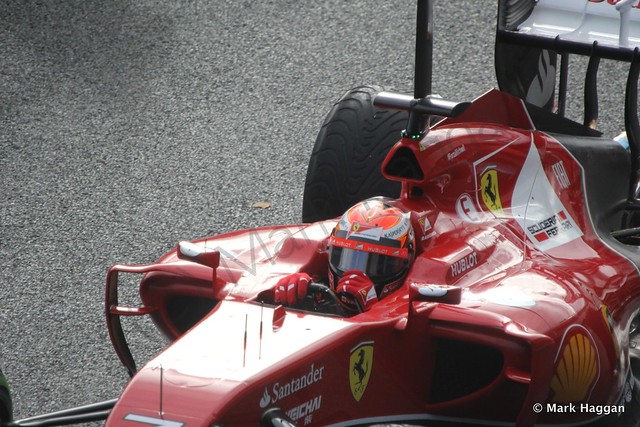 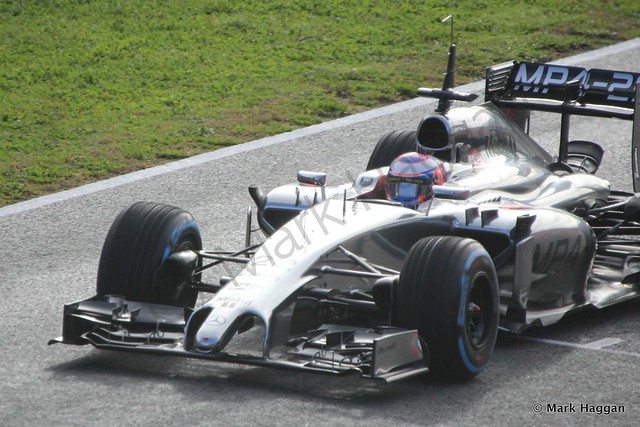 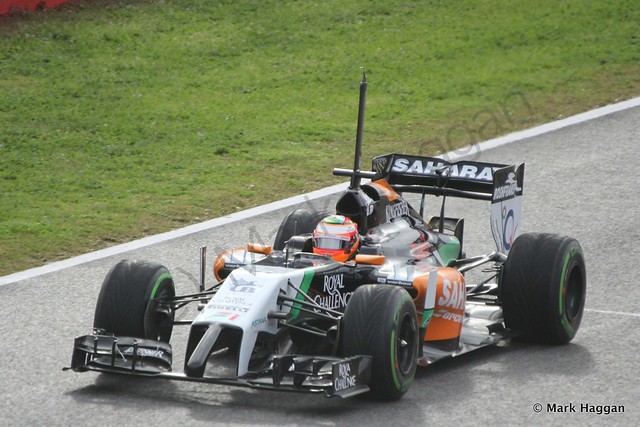 The promotional teams were taking people on a tour of the building, seemingly being the guests of Spanish bank Santander. 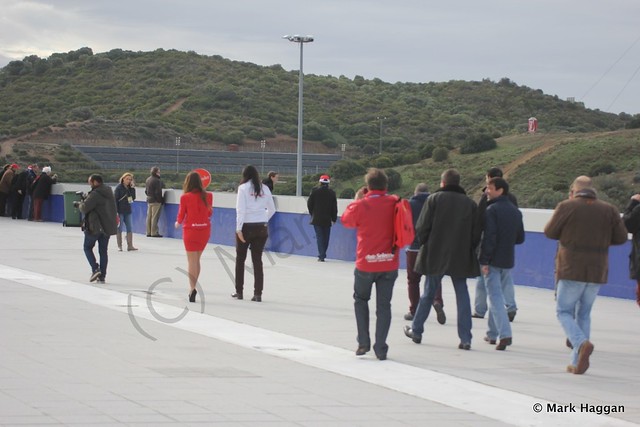 Jenson’s McLaren seemed to sound better and better through the day, after a rather odd sounding first trip around the circuit. 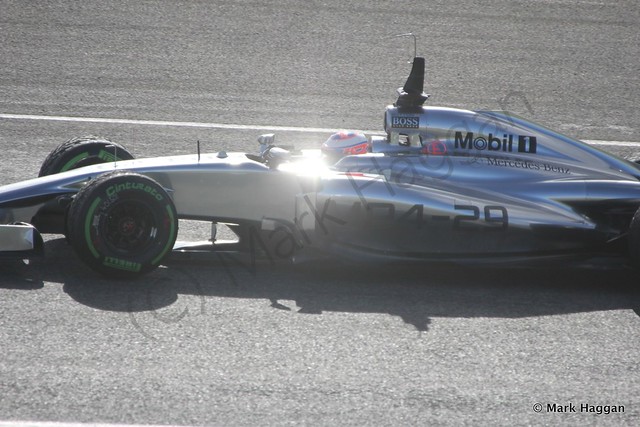 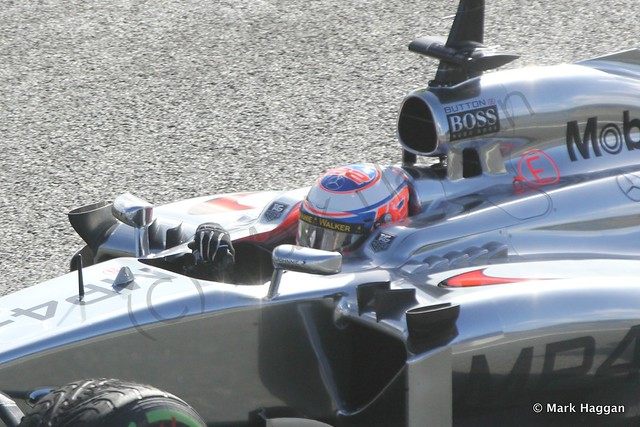 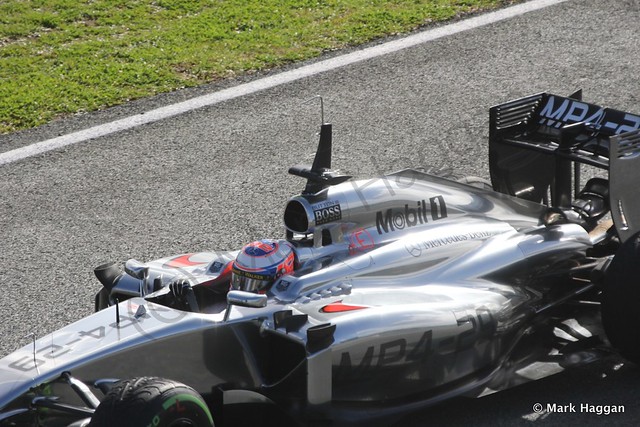 I took a tour of the circuit, including the inside areas, and saw the room where the media presentations normally happen. I managed to resist the urge to have my photo taken sitting at the place normally occupied by the race winner. 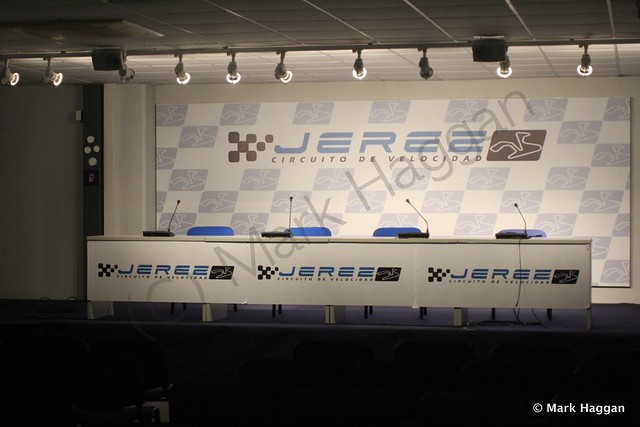 I then went around the circuit, and found some great spots to watch the action on track. 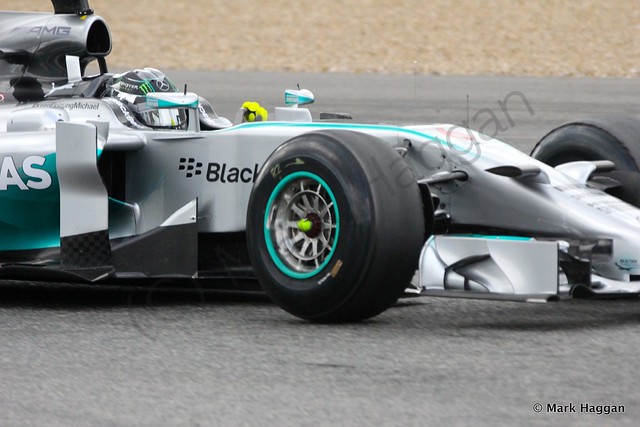 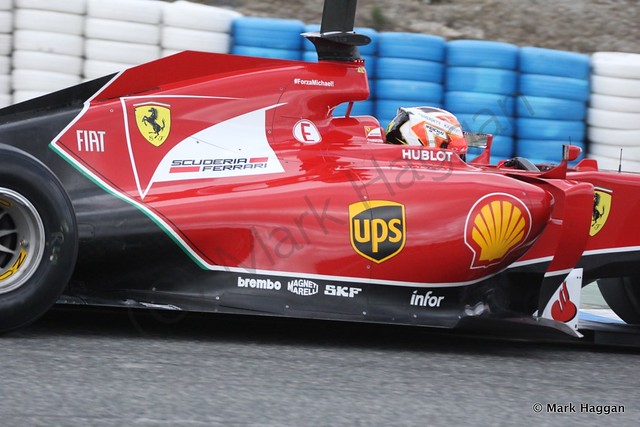 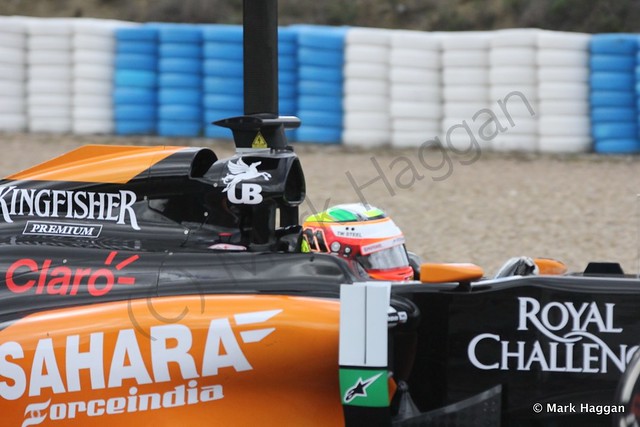 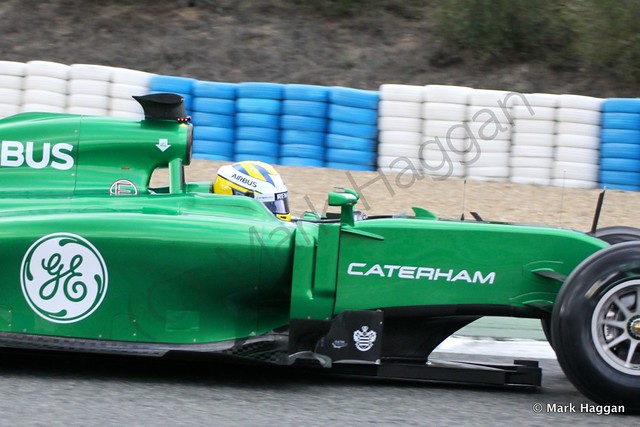 Given the recent injury to former world champion Michael Schumacher, it was nice to see some of his former teams wishing him well on their cars, with Mercedes showing a #KeppFightingMichael and Ferrari a #ForzaMichael on their cars. 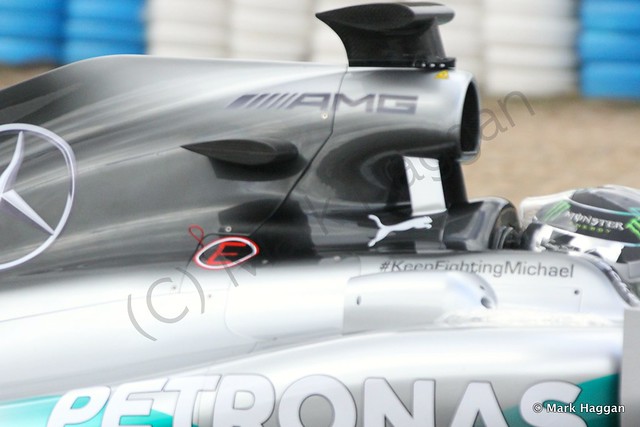 Being so close to the cars gave me the opportunity to listen to the sound of the 2014 cars.


It was another good day at testing, although there were certainly some odd results. Of course, the point of testing is to do exactly that, and before anyone makes too many predictions based on the Jerez tests, let’s see what the second and third tests hold. There may be some very different stories, and I suspect that there will still be some surprises when the Formula One circus winds its way to Melbourne.