I blogged yesterday on the apparently large number of incidents, often negative, that have happened on the 30th January over the years, and on Twitter afterwards, I surmised that perhaps there is not an unusual number of world events on this date, it is just that I am familiar with quite a few, and so the date resonates in my head.  I thought, therefore, that it would be worth looking at today, 31st January, and compare.

Although there are a number of events on the 31st, I cannot help but think that there are generally fewer than the previous day.  Over the years, the 31st January has seen the execution of Guido (Guy) Fawkes for his part in the Gunpowder Plot in 1606, Germany’s first attempted large scale use of poison gas at the Battle of Bolimow in 1915, The Battle of George Square in Glasgow in 1919, and in 1968, the Tet Offensive started.  A truck bomb in Colombo, Sri Lanka, killed at least 86 people, and injured 1400 in 1996.  In 2000, 88 people were killed when an Alaska Airlines plane crashed, and in 2001, Abdelbaset al Megrahi was convicted for his part in the Lockerbie bombing.

It has been a good day for Astronomy and Astrophysics. In 1862 the white dwarf Sirius-B, a companion star to Sirius, in 1958, the first successful US satellite, Explorer 1, was launched, and James Van Allen discovered the Van Allen radiation belt.  Ham the chimp travelled into orbit in 1961 as part of Project Mercury, and in 1966, the Soviet Union launched Luna 9, the first craft to achieve a soft lunar landing.  In 1971, Apollo 14 was launched, one of the few manned mission to the moon.  1996 saw Comet Hyakutake being discovered by Japanese amateur astronomer Yuji Hyakutake.

If you have heard of the Milwaukee Bridge War, then this was settled on this date in 1846.  The settlements of Juneautown and Kilbourntown had a dispute that included mobs forming, a few skirmishes,  and bridges being burned.  On 31st January 1846, the bridge war ended with a new bridge being opened and those on the east side and west side being unified as the city of Milwaukee.

However, this day stays in my memory for one disaster.  The 31st January 1953 saw a great storm across western Europe that claimed over 2500 lives across the Netherlands,  Belgium and the UK.  This included 133 lives that were lost on the MV Princess Victoria.  This was a ferry that operated between Stranraer in Scotland, and my town of birth, Larne, in Northern Ireland.  The Deputy Prime Minister of Northern Ireland, The Right Honourable Major Maynard Sinclair went down with the ship, as did the MP for North Down, Lieutenant-Colonel Sir Walter Smiles.  Sir Walter was succeeded as MP by his daughter, Patricia Ford,  or Lady Fisher, who became the first female Westminster MP to represent a Northern Irish constituency.  Her son in law, Sir Michael Grylls, was also an MP, although his son, Edward “Bear” Grylls, is better known for his time in the SAS, as an adventurer often on television, and a chief scout.

One of the things that seems particularly difficult to comprehend today is the amount of time that elapsed whilst the disaster happened.  The ship left harbour at 0745, and at 0900, the stern doors were breached by a wave.  An emergency signal at 0946 requested support from tugs to return to harbour, but no tugs were available.  At 1032, an SOS message mentioned that the car deck was flooded.  At 1100, the lifeboat from Portpatrick was given the wrong directions.  At 1300, the situation was “critical” with the starboard engine room flooded.  At 1315, a message was sent that thet were preparing to abandon ship, and at 1340, the evacuation started.  The last message was sent at 1358, five hours after the wave breached the door.  The ship was never more than ten miles from shore.  She finally went down five miles from the Copeland islands and within sight of the coast. I cannot comprehend the fear and distress of those on board through that time.

One of the lifeboats, filled with women and children, crashed into the wreck of the ship, and those on board were thrown into the sea.  None of those survived.  The Donaghadee lifeboat crew, in very difficult circumstances, managed to rescue 33 people.  Many of the rescuers were decorated for their bravery.

40 years after the disaster, I spent a day raising funds for the RNLI on the same route, on the Pride of Rathlin, with James Nixon. Thoughts of the brave men of Donaghadee lifeboat crew who risked their lives for those of others were not far away. 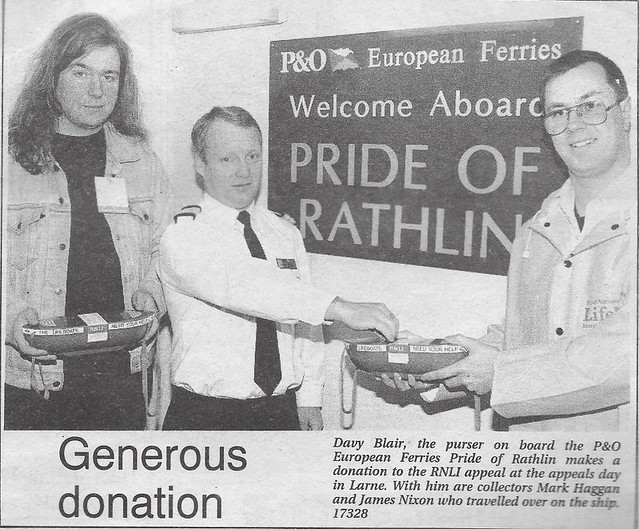 The MV Victoria’s radio officer, David Broadfoot – who was only working because he swapped shifts with a colleague – was posthumously awarded the George Cross for remaining at his post allowing the passengers and other crew members to escape whilst sacrificing himself.  He had no radio, only a morse code system, and even apologised for the poor quality of his morse code under the pressure of the situation.  The medal is on display in the museum in Stranraer.  The ship’s captain, James Ferguson, was a posthumous recipient of the George Medal, who remained on the bridge, saluting as the ship went down.  He was one of a number of George Medal recipients related to the disaster.

There is a memorial to the disaster on Chaine Memorial Road in Larne, just near the harbour, and other memorials in Stranraer and Portpatrick.  As a child, I heard stories of the days of funerals, including that of local lad, young Jack Peoples, who at 16, was the youngest member of the crew to be claimed by the disaster.

Larne is a port town, and exists mainly because of the harbour.  There are still ferries leaving regularly for Scotland; I last sailed on a crossing in late December last year.  The impact of this disaster is still felt, and as I grew up, not only were the families of some of those who lost their lives that night, but also some of the survivors, some of whom are still resident in the town.  The tragedy was made all the more intense coming as it did less than four weeks after the Nutts Corner Air Disaster, less than twenty miles from Larne, when a BEA Viking aircraft called The Lord St Vincent from Northolt in London went down, with the loss of 27 of those onboard.

There will be a ceremony today to mark the occasion, and local artist Chris Gilbert has been commissioned to produce a painting of the ship.  After sixty years, there may be fewer who recall the incident first hand, but the tragedy will live in the town’s collective memory for a long time to come.

However, let’s leave this look at the 31st January on a positive note.  On this day in 1865, the Congress of the United States of America passed the thirteenth amendment on the constitution of the USA, abolishing slavery.  This is an event that deserves to be remembered.